Tomás Laighléis (1895 - 1984) was a traditional Irish Seanchai or storyteller.

A native of Menlo, County Galway, Laighléis was a seanchai of local history and of Fianna tales. A selection of his recorded tales, was published in 1977 but contains only a fraction of his output.

The Claddagh ring is a traditional Irish ring which represents love, loyalty, and friendship.

The Hon. Emily Lawless was an Irish novelist, historian, entomologist, gardener, and poet from County Kildare. Her innovative approach to narrative and the psychological richness of her fiction have been identified as examples of early modernism.

A seanchaí is a traditional Gaelic storyteller/historian. In Scottish Gaelic the word is seanchaidh. The word is often anglicised as shanachie.

Gneeveguilla,, officially Gneevgullia, is a small village in the Sliabh Luachra region of East County Kerry, Ireland. It lies about 19 km (12 mi) east of Killarney, close to the County Kerry/County Cork border.

Menlough is a village in northeast County Galway in Ireland. Located 35 km from Galway, 27 km from Tuam, 30 km from Ballinasloe, and 20 km from Athenry, it forms part of the civil parish of Killascobe.

Edmund Lenihan, also known as Eddie Lenihan, is an Irish author, storyteller, lecturer and broadcaster. He is one of the few practising seanchaithe remaining in Ireland. He has been called "one of the greatest of Irish story-tellers" and "a national treasure".

Castlegar is a village and Roman Catholic parish in County Galway, Ireland, located just outside the city of Galway. It extends from Lough Corrib across to Merlin Park by the old Galway-Dublin road. The annual Galway Races are held at Ballybrit Racecourse in Castlegar Parish. 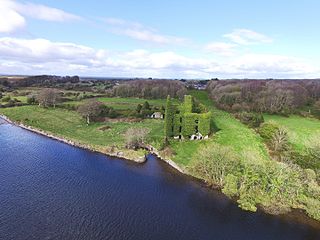 Menlo is a village and townland in one of the Gaeltacht areas of County Galway, Ireland. Menlo currently falls within the boundaries of the city of Galway, though it is outside of the urbanized parts of the city and retains the feel of a small village.

Ollie Kilkenny is a former Irish sportsperson. He played hurling with his local club Kiltormer and with the Galway senior inter-county team in the 1980s and 1990s. Kilkenny won back-to-back All-Ireland winners' medals with Galway in 1987 and 1988.

Saint Laisrén mac Nad Froích, or Laisrén of Devenish and Lasserian, also known by his petname Mo Laisse, was the patron saint of Devenish Island in Lough Erne, near Enniskillen, County Fermanagh, Northern Ireland, in the present diocese of Clogher. Laisrén is the subject of both a Latin and an Irish Life, which offer loose narratives in which a number of miscellaneous anecdotes and miracles have been grouped together. 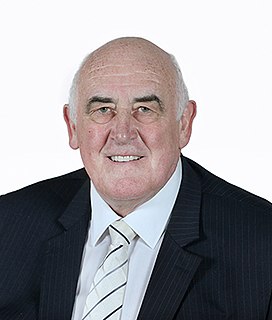 Billy Lawless is an Irish former Independent politician and businessman who served as a Senator from May 2016 to March 2020, after being nominated by the Taoiseach. 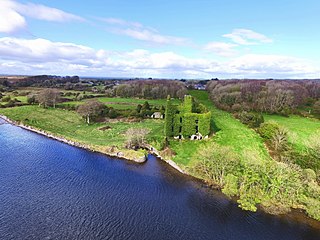 Menlo Castle also called Blake's Castle (1569–1910), is a 16th Century castle situated on the bank of the River Corrib in County Galway. It was built in 1569 and was home to the Blake family. The ruins still exist today close to the National University of Ireland (NUI) campus.