Santa Rosa is a city in the Argentine Pampas, and the capital of La Pampa Province, Argentina. It lies on the east of the province, on the shore of the Don Tomás Lagoon, at the intersection of National Routes 5 and 35. The city (94,340) and its surroundings hold 102,610 inhabitants ,Census-ar 2.010 hold 124.101 inhabitants the capital y Toay around a third of the population of the province. Its current mayor is Leandro Altolaguirre. Founded in 1892 by Tomás Mason, Santa Rosa did not develop into a relatively important agricultural centre until the second half of the 20th century. It is still one of the smallest provincial capitals of the country after Patagonian Rawson, Ushuaia and Viedma. 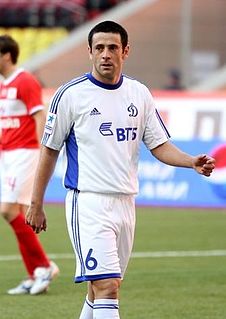 Leandro Sebastián Fernández is a former Argentine football player who played as a defender and was part of the gold medal Argentine team at the 2004 Summer Olympics. At the Olympics he was not initially part of the squad but was called up for the Gold Medal game to cover for the injured Nicolás Burdisso. He also got 4th place in 2003 FIFA World Youth Championship, and was part of the Argentina squad that were runners up in the 2004 Copa América.

Leandro Damián Cufré is a retired Argentinian footballer who last played as a defender for Club Universidad de Guadalajara of the Liga MX and the most recent manager of Mexican club Atlas F.C.

Marini is a surname of Roman/Italian Catholic origin; closely associated with the last names: Marino and Mariani with the three patronymic forms emerging from the same region at approximately the same time. Migrations branching from Italy ca.1600 gave rise to their modern forms as surnames. The Marinid dynasty was a Sunni Muslim dynasty of Zenata Berber descent that ruled Morocco from the 13th to the 15th century.

Leandro Atilio Romagnoli is an Argentine former professional footballer who played mainly as an attacking midfielder.

The shrike-like tanager, also known as the white-banded tanager, is the only member of the genus Neothraupis in the tanager family (Thraupidae), nine-primaried oscines of the Passeroidea.

Leandro N. Alem Partido is a partido in the north of Buenos Aires Province in Argentina.

Leandro Benítez is a retired Argentine footballer who usually played as a midfielder on the left side of the pitch. 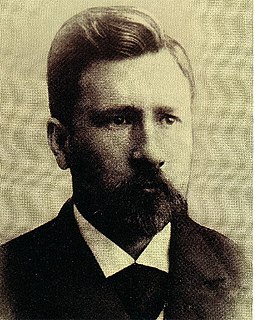 The 14th Pan American Games were held in Santo Domingo, Dominican Republic, from August 1 to August 17, 2003.

The Argentine hake is a merluccid hake of the genus Merluccius, found in the southwestern Atlantic Ocean, along the coast of Argentina, and Uruguay. This fish was described by an Argentine ichthyologist, Tomás Marini in 1933.

Leandro Martín González Pírez is an Argentine football centre back who plays for Club Tijuana of Liga MX.

The seventh season of Gran Hermano Argentina started on November 2, 2011 on Telefe. The show's length was approximately five months, finished on April 16, 2012. The prize has been increased to AR$1,000,000 (USD235,000) which will be reduced according to how many times a housemate is nominated. The show is hosted by Jorge Rial, who has hosted the show since 2007, until January 13, 2012 when he left the show. Rial was replaced by Mariano Peluffo, who hosted Gran Hermano spinoff shows.

Leandro Luis Desábato is an Argentine footballer who played as a midfielder for Cerezo Osaka in the J1 League.

Leandro Daniel Paredes is an Argentine professional footballer who plays as a central midfielder for Ligue 1 club Paris Saint-Germain and the Argentina national team.

Leandro Barrera is an Argentine football forward who plays for C.D. Mafra on loan from Marítimo in Primeira Liga. 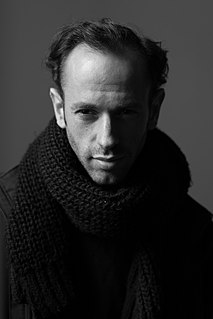 Leandro Taub is an Argentinan actor and author that was born in May 5, 1983 in Buenos Aires and raised in Bariloche. As actor he debuted as the poet Enrique Lihn in Alejandro Jodorowsky's film Endless Poetry. He wrote 4 books and one of them is Sabiduría Casera.

Mullus argentinae, the Argentine goatfish, is a species of ray-finned fish, a goatfish from the family Mullidae which is native to the western South Atlantic Ocean from Brazil to northern Agrentina. This species was formally described in 1933 by Carl Leavitt Hubbs and Tomás Leandro Marini with the type locality given as the port of Quequén in Argentina.