Limerick is a city in County Limerick, Ireland. It is located in the Mid-West Region and is also part of the province of Munster. With a population of 94,192 at the 2016 census, Limerick is the third-most populous urban area in the state, and the fourth-most populous city on the island of Ireland. The city lies on the River Shannon, with the historic core of the city located on King's Island, which is bounded by the Shannon and Abbey Rivers. Limerick is also located at the head of the Shannon Estuary, where the river widens before it flows into the Atlantic Ocean. Limerick City and County Council is the local authority for the city.

Samuel Walsh was born in London, England to Irish parents in 1951. His mother was from Limerick and his father from Ennis, County Clare. He was educated in London and Limerick. He lived in Limerick from 1968 to 1990 and he now lives and works in County Clare.

Féile na nGael, Irish for "Festival of the Gaels" is an annual tournament comprising the sports of hurling, camogie and handball organised by the Gaelic Athletic Association. Its stated aim is to bond communities, forge friendships, provide educational opportunities and unearth new leaders.

Eileen MacDonagh was born in Geevagh, County Sligo in 1956 and has worked as a sculptor since the 1980s. For her contribution to sculpture and the Arts in Ireland, MacDonagh was elected in 2004 to Aosdána, the Irish organisation that recognises artists that have contributed a unique body of work. 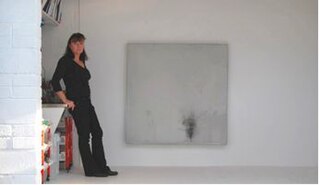 Mary FitzGerald is an Irish artist who lives and works in Dublin and County Waterford. After graduating from the National College of Art and Design, Dublin in 1977, she moved to Japan where she lived and exhibited between 1979 and 1981. FitzGerald has held numerous solo exhibitions in Ireland, Europe and the United States and has participated in group exhibitions worldwide. She has represented Ireland at ROSC, L'Imaginaire Irlandais and the XVIII Bienal de Sao Paulo. 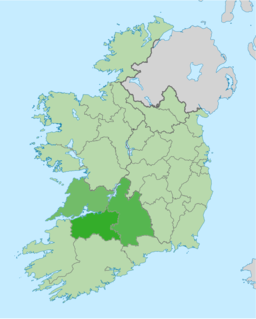 The Mid-West Region is a NUTS Level III statistical region of Ireland. The region comprises the counties of Clare, Limerick, and Tipperary. Limerick City is the economic centre of the region. It spans 10,511 km², 14.95% of the total area of the state and had a 2016 population of 473,269.