Tomás de Bhaldraithe (14 December 1916 – 24 April 1996) was an Irish language scholar and lexicographer born Thomas MacDonagh Waldron in Limerick. He is best known for his English-Irish Dictionary, published in 1959.

He moved to Dublin with his family at the age of five. He was named after Thomas MacDonagh one of the signatories of the Proclamation of the Irish Republic, who had been executed after the Easter Rising earlier that year. He adopted the use of the Irish language version of the name in both Irish and English. He received his second level education at Belvedere College in Dublin.

His stance on standard forms and spellings was supported by Éamon de Valera despite opposition from traditionalists in the Department of Education, and the work is widely seen as an important benchmark in Irish scholarship.

In 1960 he was appointed professor of modern Irish language and literature in University College Dublin, where he developed an impressive archive of material on Irish dialects. Much of the material in this archive was later used as the basis of Niall Ó Dónaill's Foclóir Gaeilge-Béarla, published in 1978, for which he was consulting editor. Also during the 1970s, de Bhaldraithe translated the Irish language diary of Amhlaoibh Ó Súilleabháin into English. It was then published by Mercier Press as "The Diary of an Irish Countryman."

The language laboratory which he set up in UCD was the first of its kind in any university in Ireland. His interest in seanchas (folklore) led to his publication of Seanchas Thomáis Laighléis in 1977, while his earlier work includes the ground-breaking study of the Cois Fharraige dialect (a variety of Connacht Irish), Gaeilge Chois Fharraige: Deilbhíocht. In later years he worked extensively on the definitive Irish dictionary, Foclóir na Nua-Ghaeilge, which remained unfinished when he died in 1996, but which is still in progress today.

Although Irish has been used as a literary language for more than 1,500 years, and modern literature in Irish dates – as in most European languages – to the 16th century, modern Irish literature owes much of its popularity to the 19th century Gaelic Revival cultural movement. Writers in Irish have since produced some of the most interesting literature to come out of Ireland, supplemented by work produced in the language abroad. 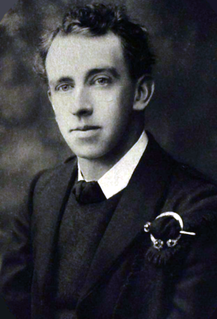 Thomas Stanislaus MacDonagh was an Irish political activist, poet, playwright, educationalist and revolutionary leader. He was one of the seven leaders of the Easter Rising of 1916, a signatory of the Proclamation of the Irish Republic and Commandant of the 2nd Battalion, Dublin Brigade of the Irish Volunteers, which fought in Jacob's biscuit factory. He was executed for his part in the Rising at the age of thirty-eight.

Irish orthography has evolved over many centuries, since Old Irish was first written down in the Latin alphabet in about the 8th century AD. Prior to that, Primitive Irish was written in Ogham. Irish orthography is mainly based on etymological considerations, although a spelling reform in the mid-20th century simplified the relationship between spelling and pronunciation somewhat.

Thomas Francis O'Rahilly was an Irish scholar of the Celtic languages, particularly in the fields of historical linguistics and Irish dialects. He was a member of the Royal Irish Academy and died in Dublin in 1953. He is the creator of O'Rahilly's historical model, which has a mixed legacy.

Eoghan Ó Tuairisc was an Irish poet and writer.

An Gúm was an Irish state company tasked with the publication of Irish literature, especially educational materials. The agency is now part of Foras na Gaeilge. Its mission statement is "To produce publications and resources in support of Irish-medium education and of the use of Irish in general." It is the largest publisher of books in Irish in the country. Seosamh Ó Murchú is the current Senior Editor.

Sláinte means "health" in Irish and Scottish Gaelic. It is commonly used as a drinking toast in Ireland, Scotland and the Isle of Man.

The Foclóir Stairiúil na Nua-Ghaeilge project was started in 1976 with the aim of creating a historical dictionary for Modern Irish. The dictionary will cover a period from 1600 to the present day. In contrast to most existing Irish dictionaries, this will be an Irish–Irish dictionary. Most others, including the highly regarded de Bhaldraithe and Ó Dónaill dictionaries, are Irish–English bilingual dictionaries.

Irish is a Goidelic language of the Celtic language family, itself a branch of the Indo-European language family. Irish originated in Ireland and was historically and still is spoken by Irish people throughout Ireland. Although English is the more common first language elsewhere in Ireland, Irish is spoken as a first language in substantial areas of counties Galway, Kerry, Cork and Donegal, as well as smaller areas of Waterford, Mayo and Meath. It is also spoken by a much larger group of habitual but non-traditional speakers across the country, mostly in urban areas where the majority are second language speakers. 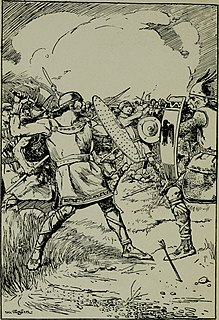 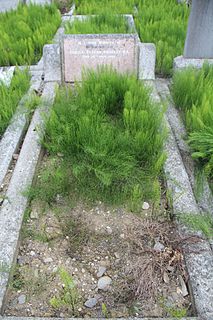 Seosamh Laoide, known as "Mac Tíre na Páirce", was an Irish language scholar and activist during the period 1893 – 1915. Today he is perhaps best remembered for his work on Irish placenames, particularly on the placenames of Dublin which often became the established Irish versions on the city's streets following the establishment of the Irish state in December 1922.

Donncha Ó Céileachair was a prominent writer in the Irish language. He and his sister, Síle Ní Chéileachair, published an influential collection of short stories, and he was also notable as a biographer and travel writer.