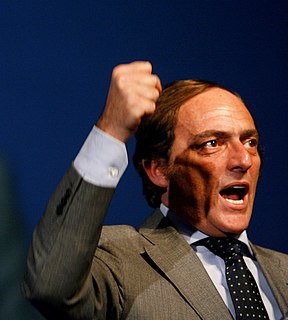 Paulo de Sacadura Cabral Portas, is a Portuguese media and political figure, who has, since the 1990s, been one of Portugal's leading conservative politicians. He was the leader of one of Portugal's right-wing parties, the CDS – People's Party (CDS-PP) from 1998–2005 and 2007–2016, on whose lists he was elected to the Portuguese Parliament in every legislative election between 1995 and 2015. He was Deputy Prime Minister from 2013 to 2015, Minister of State and Foreign Affairs from 2011 to 2013, and Minister of Defence from 2002 to 2005, all three times in coalitions of the PSD and his CDS-PP. Portas withdrew from politics in 2016. 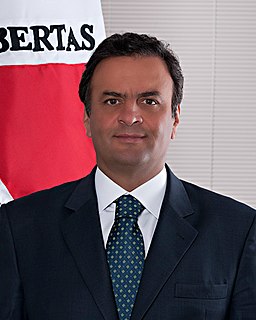 O Estado de S. Paulo, also known as O Estadão, or simply Estadão, is a daily newspaper published in the Metropolitan region of São Paulo, Brazil, and distributed mainly nationally. It is owned by Grupo Estado, a holding company which publishes the Jornal da Tarde and owns the radios Rádio Eldorado AM and FM and the Agência Estado, largest news agency in Brazil.

The Ministry of the Economy was created in 1808 with the title Secretaria de Estado dos Negócios do Brasil e da Fazenda. The ministry is responsible for formulating and implementing the country's economic, fiscal and financial policy under the President's supervision. As of January 1, 2019, Paulo Guedes is the Minister of the Economy.

João Ameal was the literary pseudonym of Portuguese historian, political theorist, novelist and politician João Francisco de Barbosa Azevedo de Sande Ayres de Campos, 3rd Count of Ameal, GCC, OSE. His surname is also graphed Aires de Campos in contemporary Portuguese orthography, and he himself signed it in both forms. Both as an author and as a politician, he was active chiefly during Portugal's Estado Novo, and is regarded as one of the regime's leading intellectuals and historiographers. He is especially renowned for his widespread História de Portugal, a multi-volume work first published in 1940, and for the several historical studies which he authored throughout his life, most of which are shaped by his integralist convictions. 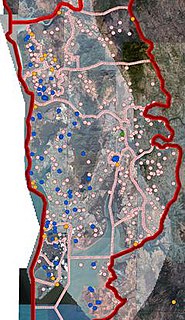 Bombay Before the British (BBB) was a three-year research project in the fields of History of Architecture and History of Urbanism, funded by the Portuguese Ministry of Science, Technology and Higher Education through its Science and Technology Foundation (FCT).

The Fort of Santo António, also known as the Redoubt of Santo António, is located on the peninsula of Monte Brasil, in the civil parish Sé, in the municipality of Angra do Heroísmo, along the southern coast of Terceira, Portuguese archipelago of the Azores. It is part of the complex of defensive structures of the Fort of São João Baptista, that crossed-fire with the Fort of São Sebastião in the defense of the Bay of Angra.

Fort of the Cavalas is a fort situated in the civil parish of São Sebastião in the municipality of Angra do Heroísmo, in the Portuguese archipelago of the Azores.

The 11th Regional Legislature was formed after regional elections held on 14 October 2012, in which the Azores Socialist Party. Representatives of the Assembly were elected from 57 constituencies, with the majority of the seats occupied by members of the Portuguese Socialist Party (PS), under the leadership of Vasco Cordeiro, who headed the 21st Government of the Azores, during the 11th Regional Assembly.

The Nikkey Shimbun or the Jornal do Nikkey is a Japanese language newspaper published in Liberdade, São Paulo, Brazil. It is one of two Japanese newspapers published in that city, with the other being the São Paulo Shimbun. As of 2014 the head of the company is Raul Takaki. As of 2013 the chief editor is Masayuki Fukuzawa.

Miguel Reis Antunes Frasquilho is a Portuguese economist, politician, and executive, currently serving as Chairman of the Board of TAP Air Portugal, Portugal's flag carrier airline. He also serves on the Olympic Committee of Portugal. 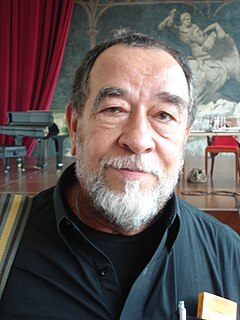 Fernando Gomes de Morais is a Brazilian journalist, biographer, politician and writer. He wrote biographies and books on a series of Brazilian historical personalities and events, many of then were adapted into film.

Solar Bandeira is a former manor house in Salvador, Brazil. It was built by Pedro Rodrigues Bandeira (1768-1835), a wealthy merchant and financier of Bahian forces during the Brazilian War of Independence. Solar Bandeira is located on the slope in the Soledade neighborhood, formerly a suburb of Salvador that included plantation and the Convent Our Lady of Solitude. The garden, which had rich mosaic work and a view of the Bay of All Saints, was called the "marvel and pride of Bahia" in the 18th and 19th century. Solar Bandeira, despite its protected status, is in an advanced state of ruin and may not be visited.

Walter Souza Braga Netto is a Brazilian army general of the Brazilian Army. He is the current Chief of Staff of the Presidency. Braga was Commander of the Eastern Military Command and, until 31 December 2018, Federal Interventor in the Public Security of the state of Rio de Janeiro.