Tomčić is a surname. Notable people with the surname include: 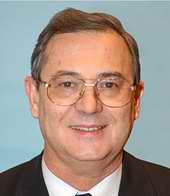 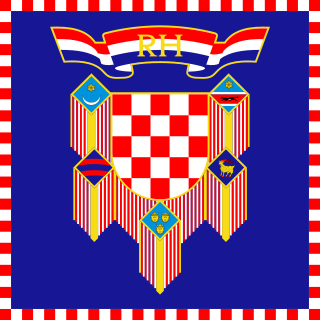 The President of Croatia, officially styled the President of the Republic, is the head of state, commander in-chief of the military and chief representative of the Republic of Croatia both within the country and abroad. The President is the holder of the highest office within the Croatia's order of precedence, however, the president is not the head of the executive branch as Croatia has a parliamentary system in which the holder of the post of Prime Minister is the most powerful person within the country's constitutional framework and within everyday's politics.

Ivica Račan was a Croatian politician who served as the Prime Minister of Croatia from 2000 to 2003, heading two centre-left coalition governments.

The Croatian Parliament or the Sabor is the unicameral representative body of the citizens of the Republic of Croatia; it is Croatia's legislature. Under the terms of the Croatian Constitution, the Sabor represents the people and is vested with legislative power. The Sabor is composed of 151 members elected to a four-year term on the basis of direct, universal and equal suffrage by secret ballot. Seats are allocated according to the Croatian Parliament electoral districts: 140 members of the parliament are elected in multi-seat constituencies, 8 from the minorities and 3 from the Croatian diaspora. The Sabor is presided over by a Speaker, who is assisted by at least one deputy speaker. 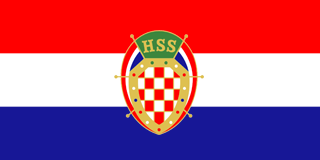 The Croatian Peasant Party is a centrist political party in Croatia founded on December 22, 1904 by Antun and Stjepan Radić as Croatian Peoples' Peasant Party (HPSS). Brothers Radić considered that the realization of Croatian statehood was possible within Austria-Hungary, but that it had to be reformed into a Monarchy divided into three equal parts – Austria, Hungary, Croatia. After the creation of Kingdom of Yugoslavia in 1918, Party requested for the Croatian part of the Kingdom to be based on self-determination. This brought them great public support which columned in 1920 parliamentary election when HPSS won all 58 seats assigned to Croatia.

Kovač, meaning "blacksmith" in Slavic languages, is a common surname in Croatia, Bosnia-Herzegovina, Slovenia and Serbia. In the Czech Republic and Slovakia the surname is Kováč.

Kovačić, alternatively spelled Kovačič in Slovene, Kovacsics in Hungarian, or transliterated as Kovacic/Kovacich/Kovachich in English, is one of the most common surnames in Croatia, Slovenia, as well as Hungary and Serbia. Etymologically it is a patronymic derivative of the surname Kovač, which is a Slavic cognate of the English surname Smith, and as such is closely related to the similar surname Kovačević.

Kovačević, Kovačevič or Kovačovič is a South Slavic surname meaning [black]smith's son. The surname is derived from Kovač, which means [black]smith, and is the equivalent of English Smithson.

Croatian names follow complex and unique lettering, structuring, composition, and naming customs that have considerable similarities with most other European name systems, and with those of other Slavic peoples in particular.

Supertalent is a talent show that is a Croatian license version of the British popular talent show Got Talent whose authors are Simon Cowell and Ken Warwick.

The following lists events that happened during 2000 in Croatia.

Kovačec is a Croatian surname. The surname may refer to:

Čedomir Tomčić is a Serbian football midfielder who plays for FK Bečej.

Martina Tomčić is a Croatian mezzosoprano opera singer. She also served as a judge on the TV talent show Supertalent.