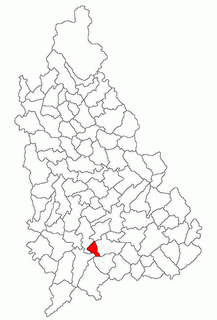 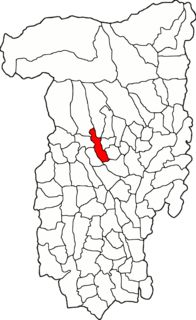 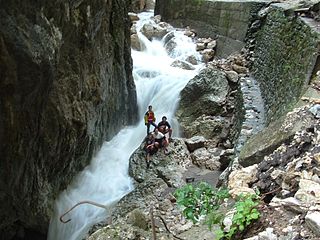 Bistrița is a right tributary of the river Olt in Romania. It discharges into the Olt near Băbeni. It starts in the Căpățânii Mountains forming one of the narrowest gorges in Romania and some beautiful caves. It flows through the villages Bistrița, Costești, Bălțățeni, Tomșani, Foleștii de Jos and Frâncești. Its length is 50 km (31 mi) and its basin size is 355 km2 (137 sq mi).

Tomşani may refer to several places in Romania: 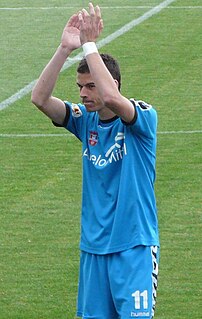 Răzvan Iulian Ochiroșii is a Romanian footballer who plays for Spanish club CD Guijuelo. Mainly a left back, he can also play as a left winger, and is known for his pace and skills.

Bogdăneşti may refer to several places in Romania:

Sătucu may refer to several villages in Romania:

The Bistricioara is a right tributary of the river Bistrița in Romania. It flows into the Bistrița in Tomșani. Its length is 22 km (14 mi) and its basin size is 72 km2 (28 sq mi).

Fortuna Poiana Câmpina was a Romanian football club from Poiana Câmpina, Prahova County founded in 2010. The team was dissolved in the summer of 2015.

The Foleşti mine is a large salt mine located in southern Romania in Vâlcea County, close to Tomșani. Foleşti represents one of the largest salt reserves in Romania having estimated reserves of 22 billion tonnes of NaCl.

The first known case of COVID-19 in Romania was confirmed in Gorj County, on February 26, 2020.