Baker was born in Southampton. [1] [2] [3] He was educated at King Edward VI School, Southampton and Exeter College, Oxford [4] and ordained in 1945. His first post was as a curate at All Saints, King's Heath [5] after which he was Vicar of St James' Church, Edgbaston. [6] He was then Sub-Warden of Lincoln Theological College [7] then Principal of Wells Theological College. [3] In 1971 he became Archdeacon of Bath and four years later was appointed to the deanery of Worcester Cathedral where he served until 1986.

David Edward Jenkins was a Church of England cleric and theologian. He was Bishop of Durham from 1984 until 1994. After his retirement, he continued to serve as an honorary assistant bishop in the Diocese of Ripon and Leeds.

Alister Edgar McGrath is a Northern Irish theologian, Anglican priest, intellectual historian, scientist, Christian apologist, and public intellectual. He currently holds the Andreas Idreos Professorship in Science and Religion in the Faculty of Theology and Religion, and is a fellow of Harris Manchester College at the University of Oxford, and is Professor of Divinity at Gresham College. He was previously Professor of Theology, Ministry, and Education at King's College London and Head of the Centre for Theology, Religion and Culture, Professor of Historical Theology at the University of Oxford, and was principal of Wycliffe Hall, Oxford, until 2005. 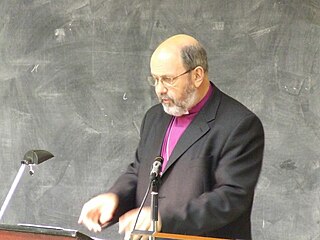 Nicholas Thomas Wright, known as N. T. Wright or Tom Wright, is an English New Testament scholar, Pauline theologian and Anglican bishop. He was the bishop of Durham from 2003 to 2010. He then became research professor of New Testament and Early Christianity at St Mary's College in the University of St Andrews in Scotland until 2019, when he became a senior research fellow at Wycliffe Hall at the University of Oxford.

Birinus was the first Bishop of Dorchester and was known as the "Apostle to the West Saxons" for his conversion of the Kingdom of Wessex to Christianity. He is venerated as a saint by the Roman Catholic Church, the Eastern Orthodox Church, and Anglican churches.

Colin Ewart Gunton was an English Reformed systematic theologian. He made contributions to the doctrine of creation and the doctrine of the Trinity. He was Professor of Christian Doctrine at King's College, London, from 1984 and co-founder with Christoph Schwoebel of the Research Institute for Systematic Theology in 1988. Gunton was actively involved in the United Reformed Church in the United Kingdom where he had been a minister since 1972.

Hastings Rashdall was an English philosopher, theologian, historian, and Anglican priest. He expounded a theory known as ideal utilitarianism, and he was a major historian of the universities of the Middle Ages.

John Bainbridge Webster (1955–2016) was an Anglican priest and theologian writing in the area of systematic, historical, and moral theology. Born in Mansfield, England, on 20 June 1955, he was educated at the independent Bradford Grammar School and at the University of Cambridge. After a distinguished career, he died at his home in Scotland on 25 May 2016 at the age of 60. At the time of his death, he was the Chair of Divinity at St. Mary's College, University of St Andrews, Scotland.

Michael Augustine Owen Lewis is an Anglican archbishop, born in England and now serving in the Middle East. He is the Anglican Bishop in Cyprus and the Gulf in the Episcopal Church in Jerusalem and the Middle East. Within his diocese lie Cyprus, Iraq, and the whole of the Arabian Peninsula including the Arab states of the Persian Gulf. He is also President Bishop and Primate of the Province of Jerusalem and the Middle East with the title of Archbishop, since 17 November 2019. 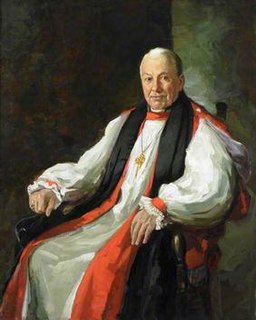 Dennis Eric Nineham was a British theologian and academic, who served as Warden of Keble College, Oxford, from 1969 to 1979, as well as holding chairs in theology at the universities of London, Cambridge, and Bristol.

Cuthbert Aikman Simpson was an Anglican priest and academic. From 1954 to 1959, he was Regius Professor of Hebrew at the University of Oxford. From 1959 to 1969, he was Dean of Christ Church, Oxford.

Oliver D. Crisp is an English theologian who currently works as Professor of Analytic Theology at the University of St Andrews, and was formerly a professor of systematic theology at Fuller Theological Seminary in Pasadena, California. Crisp was, until 2011, a reader in divinity at Bristol University in the United Kingdom. He specializes in analytic theology, philosophical theology, and historical theology. His historical work focuses on eighteenth- and nineteenth-century American Reformed theologians, including Jonathan Edwards and William Shedd. His constructive work has, to date, primarily been in the areas of Christology and hamartiology. Along with Michael Rea, Crisp has been involved in a rising trend among growing number of theologians known as analytic theology. As part of this ongoing initiative Crisp and Rea founded the Journal of Analytic Theology in 2013. Simultaneously, Crisp has worked with Fred Sanders to start the LA Theology Conference in 2013. The conference is in its sixth year as of 2018. He also has an appointment as a professorial fellow at the Logos Centre for Analytic and Exegetical Theology at the University of St Andrews.

Markus Nikolaus Andreas Bockmuehl is a biblical scholar specialising in Early Christianity. He has been the Dean Ireland's Professor of the Exegesis of Holy Scripture at the University of Oxford since 2014, and a Fellow of Keble College, Oxford, since 2007.

Philip G. Ziegler is a Canadian-born theologian who holds a personal chair as Professor in Christian Dogmatics at the University of Aberdeen. He is author of numerous scholarly articles, books, and has led various research projects within contemporary dogmatics, the theology of Dietrich Bonhoeffer, as well as theological reflection on New Testament apocalyptic. He maintains a personal website: Theologia Borealis.