Thomas John "Tom" Brown (born 16 August 1943) is a retired Anglican bishop in New Zealand. He is the former Bishop of Wellington. [1]

On 29 July 2011, Brown announced, with the support of the Primate, that he would retire in March 2012, effectively completing his duties at the end of February 2012. He retired as Bishop of Wellington during an evening service on 26 February 2012, which had the Anglican Primate of Australia, who is also the Archbishop of Brisbane, in attendance along with Archbishop David Moxon, the Primate of New Zealand.

The Anglican Primate of Australia is the senior bishop of the Anglican Church of Australia. The primate is elected from among the country's Anglican diocesan bishops.

Brown was educated at the University of Otago [2] in New Zealand and ordained in 1972. [3] After curacies at St Matthew's in Christchurch, New Zealand, and St James the Greater, Leicester, England, [4] he returned to New Zealand to become the vicar of Upper Clutha in 1976. After further incumbencies at Roslyn and Lower Hutt he became the Archdeacon of Belmont in 1987. In 1991 he became the assistant bishop and the vicar general in the Diocese of Wellington — he was consecrated a bishop on 23 February 1991 [5] — and, seven years later, its diocesan bishop. [6]

After his retirement, Brown voluntarily gave up his right to officiate as a priest after he split with his wife and then began a relationship with the chaplain of Samuel Marsden Collegiate School, Kate Carey-Smith, who was married to Chris Carey-Smith, the chaplain at St Mark's Church School, both being priests of the Anglican Diocese of Wellington. Brown said he surrendered his licence as a priest "to be loyal to the church and maintain the church's integrity". [7]

Samuel Marsden Collegiate School is located in the Wellington suburb of Karori in New Zealand. It has a socio-economic decile of 10 and provides private year 1 to 13 education for girls, with a co-educational Preschool. Its exam results rank consistently in the top schools in New Zealand. Samuel Marsden Collegiate School students complete the New Zealand National Certificate of Educational Achievement (NCEA) but the school also offers Cambridge A-Level exams in certain subjects.

St Mark's Church School is the only independent Anglican co-educational school in Wellington, New Zealand for children aged from two to Year 8. The school is often seen on cricket match broadcasts from Basin Reserve. To its front is the modern, 1970s-era church building, the parish church to which the school is attached. A wooden church stood in its place prior to the 1970s redevelopment.

David John Conner, is a British Anglican bishop. He is the current Dean of Windsor, and was formerly the Bishop to the Forces (2001–2009).

Andrew Bruce Cameron is a Scottish Anglican bishop who served as the Bishop of Aberdeen and Orkney and the Primus of the Scottish Episcopal Church.

Brian Newton Davis was the Anglican Bishop of Waikato from 1980 to 1985 and Archbishop and Primate of New Zealand and Bishop of Wellington from 1986 to 1997. 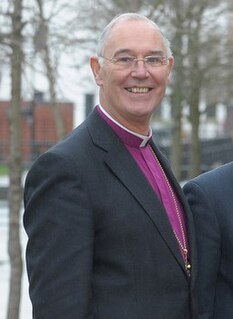 Alan Edwin Thomas Harper, is a retired Anglican bishop. He served in the Church of Ireland as Archbishop of Armagh and Primate of All Ireland from 2007 to 2012.

William Brown Turei was the Archbishop, Te Pīhopa o Aotearoa/Bishop of Aotearoa and Primate/Te Pīhopa Mataamua of the Anglican Church in Aotearoa, New Zealand and Polynesia. He shared the primacy with Philip Richardson, archbishop for the New Zealand dioceses, and Winston Halapua, Bishop of Polynesia.

Sir Frank Woods, KBE was an English-born Anglican bishop. From 1957 to 1977, he served as Archbishop of Melbourne. He was additionally the Primate of Australia between 1971 and 1977.

Keith Rayner AO is a retired Australian Anglican bishop and a former Anglican Primate of Australia.

Colin William Fletcher, is a British Anglican bishop. He is the current area Bishop of Dorchester in the Diocese of Oxford.

Christopher Heudebourck Morgan is a retired bishop in the Church of England, the area Bishop of Colchester from 2002 until his retirement in 2013.

Derek Lionel Eaton is a retired New Zealand Anglican bishop. He was the 9th Anglican Bishop of Nelson, from 1990 to 2006.

Joseph Abiodun Adetiloye was the former Primate of the Church of Nigeria. He was married briefly for 11 months, until his wife's death in 1968; they had a son.