Gola was the third of seven children born to Ike and Helen Gola. Gola's father was a Philadelphia policeman of Polish descent who had changed the family's surname from "Galinsky". [1] Gola was praised as a great all-around player as a high school student at La Salle College High School,where he led the Explorers to a Philadelphia Catholic League Championship. He entered La Salle a year after another Philadelphia basketball Hall of Famer,Paul Arizin,graduated from Villanova.

Gola was one of the most talented collegiate athletes in Philadelphia sports history. He came to national attention while playing for his hometown La Salle University Explorers men's basketball team.

Gola starred as a college freshman and led La Salle to the 1952 NIT championship. [2] Gola paced the Explorers to the NCAA basketball championship in 1954 and was named Tournament MVP. That same season he was selected as National Player of the Year. As a senior,Gola helped La Salle finish as the runner-up in the 1955 NCAA Tournament. At 6'6" (198 cm),Gola was clearly a forward who could shoot/score,rebound and defend,but he also had the ballhandling (dribbling,passing) skills of a guard,and with his shooting range and All-Pro defensive skills,could play just as well in the backcourt.

He averaged 20.9 points and 19.0 rebounds during 115 games and remains the NCAA All time rebounding leader with 2,201 career rebounds.

After a phenomenal college career,Gola turned pro with the Philadelphia Warriors as a territorial draft pick. He teamed with All-Pros Paul Arizin and Neil Johnston to lead the Warriors to an NBA championship in 1956. He gained praise for concentrating on defense,passing and rebounding and allowing the other two to be the chief scorers during these years.

In 1959,Johnston temporarily retired due to a knee injury and the Warriors added seven-foot superstar Wilt Chamberlain. Again sacrificing himself for his team,Gola helped the Warriors consistently reach the NBA Playoffs,but they could not beat the star-studded Boston Celtics in the NBA Eastern Division during his seasons in the early 1960s even with Chamberlain. During the 1959–60 season,Gola became the first Warrior to have three straight games with a triple-double (the only other being Draymond Green,2016). On January 10,1960,Gola recorded 18 points,19 rebounds and 11 assists in a 116–103 win over the New York Knicks. [4]

Gola played with the New York Knicks from 1962 to 1966. He was enshrined in the Naismith Memorial Basketball Hall of Fame on April 26,1976.

In 1968,Gola returned to his alma mater as head coach,leading the Explorers to a 37–13 record during his two-year stay. He was named Coach of the Year by Philadelphia and New York journalists. He led the Explorers to a 23–1 record during the 1968–69 season,but La Salle had been barred from the NCAA Tournament before the season because an alumnus had offered some players "no-show" jobs. The school's Tom Gola Arena was named after him.

In 1968,Gola was elected to the Pennsylvania State House as a Republican,representing the Northeast Philadelphia-based 170th District. A change to the State Constitution made earlier that year had reorganized House seats into legislative districts,replacing the old system of allotting seats on an at-large,county-wide basis. This made Gola the first person to represent the newly created district. Ultimately,Gola would not finish-out his first term in the House,opting instead to seek the office of Philadelphia City Controller in 1969. He scored an 80,000 vote victory over Democrat Charles Peruto in the general election,and took office the following January.

Gola was defeated,however,in his bid for a second term in 1973 by Democrat William Klenk. His defeat was part of a broader setback for Republicans in the city that year,as Arlen Specter lost his bid for a third term as District Attorney. [5] Gola made his final attempt at elected office in 1983,when he sought the office of Mayor. He came in last in the three-man Republican primary,behind Congressman Charlie Dougherty and the winner,John Egan,who went on to lose the fall general election to Wilson Goode. [6]

Gola was married to Caroline Norris in June 1955,and they had one son,Thomas Christopher.

Gola died on January 26,2014,thirteen days after his 81st birthday,in Meadowbrook,Pennsylvania. [1] A former US Army specialist,he was buried at the Washington Crossing National Cemetery in Upper Makefield Township,Bucks County,Pennsylvania. [7] 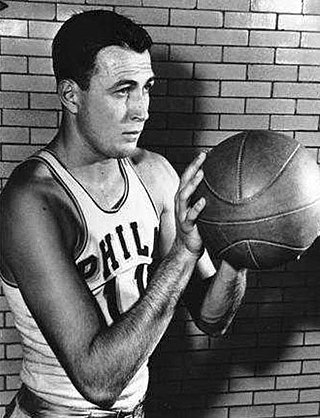 Paul Joseph Arizin,nicknamed "Pitchin' Paul",was an American basketball player who spent his entire National Basketball Association (NBA) career with the Philadelphia Warriors from 1950 to 1962. He retired with the third highest career point total (16,266) in NBA history,and was named to the NBA's 25th,50th and 75th anniversary teams. He was a high-scoring forward at Villanova University before being drafted by the Warriors of the fledgling NBA. 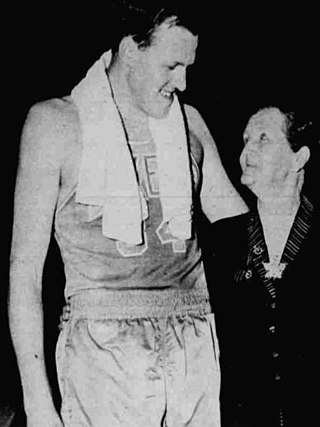 Robert Allen McAdoo Jr. is an American former professional basketball player and coach. He played 14 seasons in the National Basketball Association (NBA),where he was a five-time NBA All-Star and named the NBA Most Valuable Player (MVP) in 1975. He won two NBA championships with the Los Angeles Lakers during their Showtime era in the 1980s. In 2000,McAdoo was inducted into the Naismith Basketball Hall of Fame. He was named to the NBA 75th Anniversary Team in 2021. 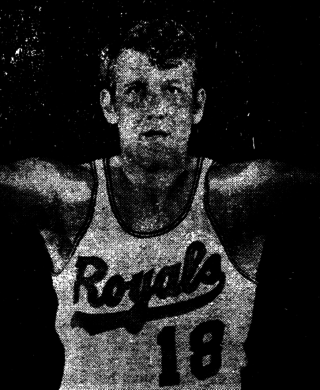 Darrall Tucker Imhoff was an American professional basketball player. He spent 12 seasons in the National Basketball Association (NBA),playing for six teams from 1960 to 1972. He made an NBA All-Star team,and was also an Olympic Gold medalist. He is perhaps best remembered for being one of the defenders tasked with guarding Wilt Chamberlain during his famed 100-point game in 1962.

Donald Neil Johnston was an American basketball player and coach. A center,Johnston played in the National Basketball Association (NBA) from 1951 to 1959. He was a member of the Philadelphia Warriors for his entire career. Known for his hook shot,Johnston was a six-time NBA All-Star;he led the NBA in scoring three times and led the league in rebounding once. He won an NBA championship with the Warriors in 1956. After his playing career ended due to a knee injury,Johnston coached in the NBA,in other professional basketball leagues,and at the collegiate level. He was inducted into the Naismith Memorial Basketball Hall of Fame as a player in 1990. 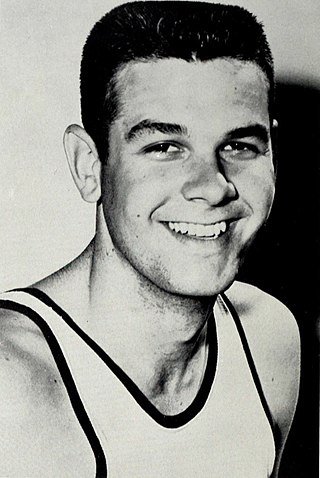 Bailey E. Howell is an American former professional basketball player. After playing college basketball at Mississippi State,Howell played 12 seasons in the National Basketball Association (NBA). Howell was a six-time NBA All-Star,two-time NBA champion and was inducted into the Naismith Memorial Basketball Hall of Fame in 1997. 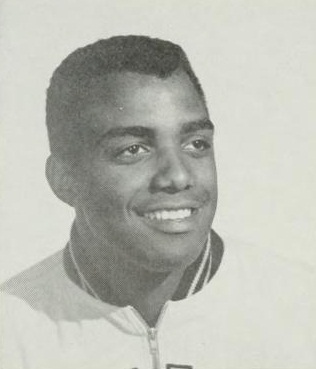 William Dean Naulls was an American professional basketball player for 10 years in the National Basketball Association (NBA). He was a four-time NBA All-Star with the New York Knicks and won three NBA championships with the Boston Celtics.

The La Salle Explorers are the varsity sports teams from La Salle University in Philadelphia. The Explorers compete in NCAA Division I as members of the Atlantic 10 Conference. The men's and women's basketball teams are also participate in the Philadelphia Big 5. On June 3,2019,Brian Baptiste was named Director of Athletics and Recreation effective August 1,2019. Baptiste currently serves as Deputy AD for Capital Projects and Operations at Northwestern University.

Lawrence T. Cannon is an American retired basketball player. Born and raised in Philadelphia,Cannon was selected in the first round of the 1969 NBA draft by the Chicago Bulls with the fifth overall pick. Cannon was an American Basketball Association All-Star,who averaged 16.6 points per game in his ABA/NBA career after his All-American career at LaSalle College. Cannon was forced to retire from basketball due to a chronic medical condition,phlebitis in his legs.

Robert J. McNeill is an American former professional basketball player. He played in the National Basketball Association (NBA) from 1960 to 1962.

The 1955–56 Philadelphia Warriors season George Senesky took over for Eddie Gottlieb as coach,the Warriors had a strong start by winning 12 of their first 16 games. Paul Arizin and Neil Johnston were among the league's scoring leaders as the Warriors won the Eastern Division with a 45–27 record. The addition of rookie Tom Gola made the difference. In his first season Gola averaged 9.1 rebounds and 5.9 assists per game. In the Eastern Division Finals the Warriors beat the Syracuse Nationals in 5 games. In the NBA Finals,the Warriors won their 2nd Championship by beating the Fort Wayne Pistons 4 games to 1.

Norman Grekin was an American professional basketball player. After playing college basketball for La Salle Explorers,he went on to play for the Philadelphia Warriors in the National Basketball Association (NBA).

Jerry Koch is a retired American basketball player. He is known for his collegiate career at Saint Louis University (SLU) between 1951–52 and 1954–55. A forward,Koch once recorded 38 rebounds in a single game. He accomplished the feat on March 5,1954 against Bradley University. The 38 rebounds remain a SLU and Missouri Valley Conference record. Koch was also instrumental in SLU's 1952 NCAA Tournament Elite Eight appearance;during his freshman season he teamed with his older brother and the team's center,Bob,as a dominant frontcourt duo.