Johnston grew up in Kelso and began his senior career with Edinburgh side St Bernard's before moving south to join Peterborough United in late 1938. He guested for Bourne Town and Northampton Town during the Second World War and signed for Nottingham Forest upon its conclusion. He crossed the Trent to join Notts County in 1947 and played alongside Tommy Lawton.

Originally an inside forward, Johnston latterly developed into a goal-scoring outside left. Following his playing retirement he earned FA coaching qualifications and, in 1956, a coaching position with Birmingham City. His first managerial role was with non-league Heanor Town before a twenty-year career in charge of Rotherham, Grimsby, Huddersfield and York.

Maurice John Giblin Johnston is a Scottish football player and coach. Johnston, who played as a striker, started his senior football career with Partick Thistle in 1981. He moved to Watford in 1983, where he scored 23 league goals and helped them reach the 1984 FA Cup Final. In 1984 he joined Celtic and scored 72 goals in 128 matches, won the Scottish Cup in 1985 and the Scottish league championship in 1986. Johnston signed for Nantes in 1987. He returned to Glasgow with Rangers in 1989, becoming the second player to cross the Old Firm divide since World War II and the first open Catholic to play for Rangers since World War I. 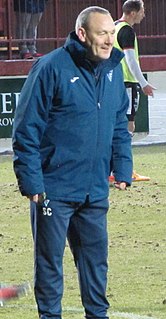 Daryl Peter "Moose" Johnston is a former fullback in the National Football League for the Dallas Cowboys. He played college football at Syracuse University. He was the General Manager of the San Antonio Commanders of the Alliance of American Football in 2019, and currently serves as Director of Player Personnel for the Dallas Renegades.

Michael James Buxton is a former footballer and football manager in England. He has managed Huddersfield Town, Scunthorpe United and Sunderland.

Noel David Whelan is an English former professional footballer and he is currently the Matchday co-commentator for all Leeds United games on BBC Radio Leeds. He was also a former Academy Coach at Football League Championship side Derby County.

Colin Cramb is a Scottish former professional footballer and coach who played as a forward from 1991 and 2009.

Alan Neilson is a Welsh former professional footballer who currently works as a Professional Development Coach for Norwich City.

Scott Yuill Thomson is a Scottish former professional football goalkeeper, who played mainly for Raith Rovers and won the 1994 Scottish League Cup Final when the Stark's Park club defeated Celtic at Ibrox Park. Since retiring as a player, he has worked as a goalkeeping coach.

Colin Dobson is an English former footballer, who played as an inside-forward. He has also had a long career in coaching and has coached domestic and national teams in Arabia. He is now scouting for Stoke City.

Thomas Guinne "Tom" Goode was an American football offensive lineman, coach, and administrator from West Point, Mississippi. He is probably best remembered as the long snapper on Jim O'Brien's game winning field goal in Super Bowl V that gave the Baltimore Colts a 16-13 victory over the Dallas Cowboys

Thomas Eggleston was an English footballer and manager.

Tom Jones is an English-born former footballer who played as a midfielder.

Gareth John Evans is an English football player and coach. He played for Coventry City, Rotherham United, Hibernian, Stoke City, Northampton Town, Partick Thistle, Airdrie and Alloa Athletic. Evans has been the caretaker manager of Hibernian and Livingston, and was head coach of the Scotland women's under-19 national team for four years.

John Thomas "Tom" Walley is a Welsh former footballer, who played as a wing half.

Scott Lindsey is an English former footballer. He played as a midfielder in the Football League for Gillingham and is currently the manager of Chatham Town. He is the son of footballer Keith Lindsey.

Jeffrey Reginald Wood is an English former professional footballer who played as a goalkeeper. He is currently the manager of Manchester 62, and was also goalkeeping coach for the Wales U19 and Wales U21 teams.