Tom Macdonald (1900–1980) was a Welsh journalist and novelist, whose most significant publication was his highly evocative account of growing up in the north of Cardiganshire (now Ceredigion) in the years before the Great War, which was published in 1975 as The White Lanes of Summer. [1]

Ceredigion is a county in Wales, known prior to 1974 as Cardiganshire. During the second half of the first millennium Ceredigion was a minor kingdom. It has been administered as a county since 1282. Welsh is spoken by more than half the population. Ceredigion is considered to be a centre of Welsh culture. The county is mainly rural with over 50 miles (80 km) of coastline and a mountainous hinterland. The numerous sandy beaches, together with the long-distance Ceredigion Coast Path provide excellent views of Cardigan Bay.

Thomas Macdonald was born on 22 November 1900 at Llanfihangel Genau'r Glyn in Cardiganshire, the son of John Macdonald (1860–1938), a tinker of Irish descent, and his second wife Ada Jones (1878–1946). He spent his early childhood in a small cottage in the village, before moving with his family first to Pen-y-garn and then going on to live in nearby Bow Street. According to his father the family name was actually MacDonnell, but had been inadvertently changed to Macdonald by the local registrar of births and deaths.

Llandre, or Llanfihangel Genau'r Glyn, is a village in Ceredigion, Wales. It lies 5 miles north of Aberystwyth in the north-west of the county, on the road from Rhydypennau to Borth. To the north lies the village of Dôl-y-bont. The community is called Geneu'r Glyn.

Pen-y-garn is a small village in the Tirymynach district of Ceredigion, Wales, approximately 4 miles (6 km) north-east of Aberystwyth. Along with the hamlet of Rhydypennau, Pen-y-garn is now often considered to be part of the neighbouring larger village of Bow Street. All three places stretch in a long narrow strip along the main Aberystwyth to Machynlleth road (A487). As well as the houses on the main road from Cross Street up to Ysgol Rhydypennau, Pen-y-garn also includes the housing estates of Maes Ceiro, Bryn Meillion, Maes y Garn and Cae'r Odyn. 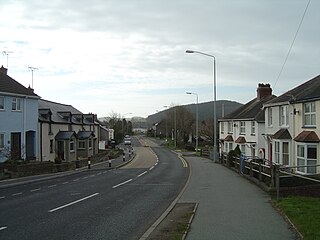 Bow Street is a large village in the Tirymynach district of Ceredigion, Wales, approximately 3.5 miles (5.6 km) north-east of Aberystwyth. As well as Bow Street itself, it is now often considered to include the neighbouring smaller village of Pen-y-garn and the hamlet of Rhydypennau. All three places stretch in a long narrow strip along the main Aberystwyth to Machynlleth road, the (A487).

Although his background was Catholic, he was deeply influenced by the Welsh Calvinistic Methodism of the community in which he lived.

Tom Macdonald was initially educated at Rhydypennau Board School and then at Ardwyn Grammar School in Aberystwyth, before going on to study at the University College of Wales, Aberystwyth. [2] , but, before he could graduate, his mentor died. He then embarked on a forty-year career as a newspaper journalist, first at the Cambrian News, Aberystwyth, then the Western Mail and the Daily Express. He later worked in China and Australia, before returning to Wales during the Great Depression. In 1939, he and wife, Eileen, travelled to South Africa where he eventually became chief reporter and news editor at The Sunday Times in Johannesburg, South Africa because childhood illnesses prevented him from joining up to take part in the Second World War. 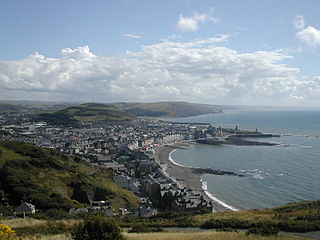 Aberystwyth is an ancient market town, administrative centre, community, and holiday resort in Ceredigion, Wales. It is located near the confluence of the Ystwyth and the Afon Rheidol. 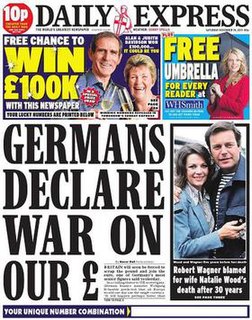 The Daily Express is a daily national middle-market tabloid newspaper in the United Kingdom. It is the flagship of Express Newspapers, a subsidiary of Northern & Shell. It was first published as a broadsheet in 1900 by Sir Arthur Pearson. Its sister paper, the Sunday Express, was launched in 1918. In February 2019, it had an average daily circulation of 315,142.

Tom Macdonald’s first book was entitled Henry and Songs of Nature (1920), and was written in memory of his younger brother who died aged seven in 1913. He later went on to publish six novels in English: Gareth the Ploughman (1939), The Peak (1941), Gate of Gold (1946), The Black Rabbit (1948), How Soon Hath Time (1950), and The Song of the Valley (1951) all set in Wales; together with two works dealing with South African current affairs and recent history: Ouma Smuts: The First Lady of South Africa (1946), Jan Hofmeyr: Heir to Smuts (1948), and The Transvaal Story, the last a compilation of articles written about his travels around the province and characters he had met (1961). He also wrote a number of short stories, which were published in several English language magazines, especially in Argosy. [3]

His memoirs, written over a number of years whilst in South Africa, were first published in a Welsh translation with the title Y Tincer Tlawd (1971), before being finally published in English as The White Lanes of Summer (1975). He later claimed that this was “nearer to my heart than anything I have written”. He went on to publish two other non-fiction works, one in English: Where Silver Salmon Leap (1976), and the other translated into Welsh: Gwanwyn Serch (1982), which contained more memories of his childhood and was a sequel to Y Tincer Tlawd. A further novel was published in Welsh with the title Y Nos Na Fu (1974), whilst his first English novel was also translated into Welsh as Croesi’r Bryniau (1980).

In 1962, Tom Macdonald initially retired to the South Coast [Natal, South Africa], but spurred by ill health and hiraeth (nostalgia - Welsh), finally returned to Bow Street, Ceredigion in 1965, briefly living at Plas Cwmcynfelyn before settling at ‘Y Nyth’ in Capel Bangor. He died at his home on 9 February 1980 aged 79 years.

Capel Bangor is a small village in Ceredigion, in Wales. Its population is around 600-1000, and it is also approximately five miles from the seaside and university town of Aberystwyth. 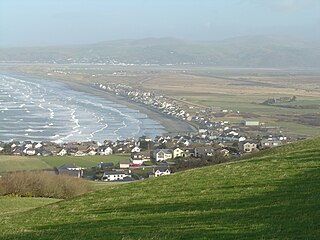 Borth, is a village and seaside resort 7 miles north of Aberystwyth in Ceredigion, Mid Wales, on the Ceredigion Coast Path. The population was 1,399 in 2011.

Islwyn Ffowc Elis was one of Wales's most popular Welsh-language writers. 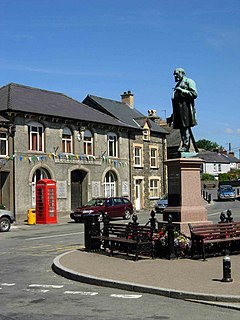 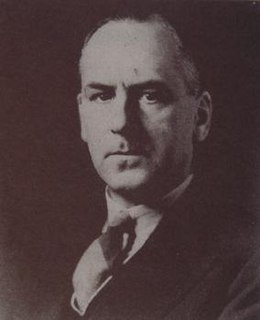 Dr Thomas Ifor Rees C.M.G. was a British diplomat, author and translator. Born Thomas Ifor Rees at 'Bronceiro' near the hamlet of Rhydypennau in Cardiganshire, Wales, he served as Britain's first Ambassador to Bolivia from 1947 until his retirement in 1949.

Ceredigion, formerly Cardiganshire, is a constituency represented in the House of Commons of the UK Parliament. Created in 1536, the franchise expanded in the late 19th century and on the enfranchisement of women and its boundaries remained virtually unchanged until 1983. From 1536 until 1885 the area had two seats : a county constituency (Cardiganshire) comprising the rural areas, the other the borough constituency known as the Cardigan District of Boroughs comprising a few separate towns; in 1885 the latter was abolished, its towns and electors incorporated into the former, reduced to one MP. The towns which comprised the Boroughs varied slightly over this long period, but primarily consisted of Cardigan, Aberystwyth, Lampeter and Adpar, the latter now a suburb of Newcastle Emlyn across the Teifi, in Carmarthenshire.

Moelona was the pen-name of Elizabeth (Lizzie) Mary Jones, a Welsh novelist and translator who wrote novels for children and other works in Welsh. 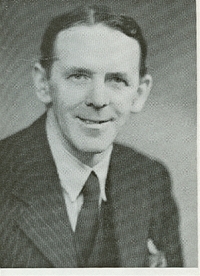 Emrys George Bowen FRGS, FSA, also known as E. G. Bowen, was an internationally renowned geographer with a particular interest in the physical geography and social geography of his native Wales. A diminutive figure, Bowen was on the academic staff of the Department of Geography and Anthropology at the University College of Wales, Aberystwyth, from the 1920s and was still writing and lecturing there until his death in 1983.

Ysgol Gyfun Gymunedol Penweddig is a Welsh-language, community comprehensive school situated in Llanbadarn Fawr, Aberystwyth, Wales. The school was established in 1973. The school was the first Welsh language secondary school in Ceredigion and is named after the cantref of Penweddig, the northern part of the Kingdom of Ceredigion, between the rivers Dyfi and Ystwyth.

Mihangel Morgan is a Welsh author.

Rhydypennau is a hamlet in the Genau'r-glyn district of Ceredigion, Wales, approximately 4 1⁄2 miles (7.2 km) north-east of Aberystwyth. Along with the village of Pen-y-garn, Rhydypennau is now often considered to be part of the neighbouring village of Bow Street. All three places stretch in a long narrow strip along the main Aberystwyth to Machynlleth road (A487).

Dewi Morgan, also known by his bardic name "Dewi Teifi", was a Welsh bard, scholar and journalist, who won the Chair at the 1925 National Eisteddfod of Wales in Pwllheli with his important awdl recounting the legend of Cantre'r Gwaelod.

John Humphreys Davies was a Welsh lawyer, bibliographer and educator.

Thomas Hughes Jones was a Welsh poet and writer from Ceredigion (Cardiganshire) in West Wales. He wrote several collections of stories and contributed to various journals, including Welsh Outlook, throughout his career. In 1940 he won the Literature Medal for his story, "Sqweier Hafila", at the National Eisteddfod. His pen name was generally abbreviated to "T. Hughes Jones".

Peaceful Places is a heritage tourism trail, launched in 2014. The trail encompasses churches and chapels across the north of the Ceredigion county of Wales, each with its own story. There are 17 places to visit which can be found at Cardigan Bay, and in the valleys and hills of the Cambrian Mountains. The heritage contained within the places of worship span from pre-Christian to modern times.