He was born in St. Louis, Missouri and died of pneumonia [3] in New Orleans, Louisiana. [4]

Grover Cleveland Alexander, nicknamed "Old Pete", was an American Major League Baseball pitcher. He played from 1911 through 1930 for the Philadelphia Phillies, Chicago Cubs, and St. Louis Cardinals. He was elected into the Baseball Hall of Fame in 1938.

George Thomas Seaver, nicknamed "Tom Terrific" and "the Franchise", was an American professional baseball pitcher who played 20 seasons in Major League Baseball (MLB). He played for the New York Mets, Cincinnati Reds, Chicago White Sox, and Boston Red Sox from 1967 to 1986. A longtime Met, Seaver played a significant role in their victory in the 1969 World Series over the Baltimore Orioles. 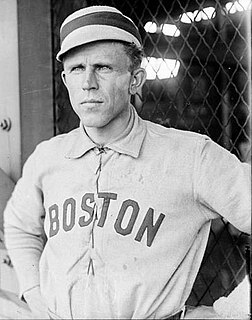 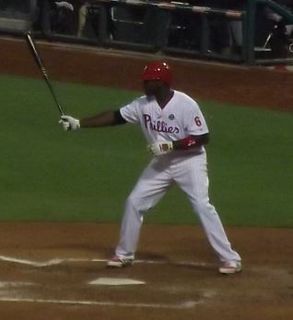 In baseball, a golden sombrero is a player's inglorious feat of striking out four times in a single game.

Richard Charles Wise is an American former professional baseball player and coach. He played in Major League Baseball as a right-handed pitcher between 1964 and 1982 for the Philadelphia Phillies, St. Louis Cardinals, Boston Red Sox, Cleveland Indians and the San Diego Padres. The two-time National League All-Star player pitched a no-hitter on June 23, 1971. Wise was the winning pitcher for the Boston Red Sox in Game 6 of the 1975 World Series, considered by some to be the greatest Series game ever played.

The following are the baseball events of the year 1883 throughout the world.

Ossee Freeman Schrecongost, born F. Osee Schrecongost, was an American professional baseball catcher and first baseman. He played for seven Major League Baseball (MLB) teams between 1897 and 1908. Between 1902 and 1908, he caught for the Philadelphia Athletics, where he was the roommate and battery mate for pitcher Rube Waddell. Schreckengost's first name is sometimes spelled "Ossie" and his last name is sometimes shortened to "Schreck" to suit the limited space in baseball box scores.

The 2000 Major League Baseball season ended with the New York Yankees defeating the New York Mets in five games, for their third consecutive World Series title. The 2000 World Series was known as the Subway Series because both fans and the two teams could take the subway to and from every game of the series.

John Henderson Burnett was an American professional baseball player who was a utility infielder in Major League Baseball for nine seasons during the 1920s and 1930s. Burnett played second base, third base, shortstop, and outfielder for the Cleveland Indians and St. Louis Browns.

The 1962 New York Mets season was the first regular season for the Mets, as the National League returned to New York City for the first time since 1957. They went 40–120 (.250) and finished tenth and last in the National League, 60+1⁄2 games behind the NL Champion San Francisco Giants, who had once called New York home. The Mets were the latest team to be 60+ games behind in a division before the 2018 Baltimore Orioles finished 61 games behind the World Series Champion Boston Red Sox. The Mets' 120 losses are the most by any MLB team in one season since the 1899 Cleveland Spiders. Since then, the 2003 Detroit Tigers and 2018 Orioles have come the closest to matching this mark, at 43–119 (.265), and 47-115 (.290), respectively. The Mets' starting pitchers also recorded a new major league low of just 23 wins all season.

Ody Cleon Abbott was a major league outfielder for the St. Louis Cardinals for one year in 1910. He attended Washington & Jefferson College.

Joseph Francis Connor was an American right-handed Major League Baseball catcher. A native of Waterbury, Connecticut, he played for four seasons in Major League Baseball, including stints with the St. Louis Browns in 1895, the Boston Beaneaters in 1900, the Milwaukee Brewers and Cleveland Blues in 1901, and the New York Highlanders in 1905.

The St. Louis Cardinals are an American professional baseball team based in St. Louis, Missouri. The Cardinals compete in Major League Baseball (MLB) as a member club of the National League (NL) Central division. Since the 2006 season, the Cardinals have played their home games at Busch Stadium in downtown St. Louis. One of the nation's oldest and most successful professional baseball clubs, the Cardinals have won 11 World Series championships, more than any NL team and second in MLB only to the New York Yankees. The team has won 19 National League pennants, third-most of any team. St. Louis has also won 14 division titles in the East and Central divisions.

In baseball statistics, total bases is the number of bases a player has gained with hits. It is a weighted sum for which the weight value is 1 for a single, 2 for a double, 3 for a triple and 4 for a home run. For example, three singles is three total bases, a double and a home run is six total bases, and three triples is nine total bases.