Last updated May 31, 2020
For other people with the same name, see Thomas Roberts (disambiguation).

After attending art schools in Melbourne, he travelled to Europe in 1881 to further his training, and returned home in 1885, "primed with whatever was the latest in art". [1] He did much to promote en plein air painting and encouraged other artists to capture the national life of Australia. While he is best known for his "national narratives"—among them Shearing the Rams (1890), A break away! (1891) and Bailed Up (1895)—he also achieved renown as a portraitist, and in 1903 completed The Big Picture , the most famous visual representation of the first Australian Parliament.

Roberts was born in Dorchester, Dorset, England, although some mystery surrounds his actual birthdate: his birth certificate says 8 March 1856, whereas his tombstone is inscribed 9 March. [2]

Roberts migrated with his family to Australia in 1869 to live with relatives. Settling in Collingwood, a suburb of Melbourne, Victoria. He worked as a photographer's assistant through the 1870s, while studying art at night under Louis Buvelot and befriending others who were to become prominent artists, notably Frederick McCubbin.

During this period, his mother had remarried to a man whom Roberts did not get on with. He hence decided to further his art studies, and returned to England for three years of full-time art study at the Royal Academy Schools from 1881 to 1884. He traveled in Spain in 1883 with Australian artist John Russell, where he met Spanish artists Laureano Barrau and Ramon Casas who introduced him to the principles of Impressionism and plein air painting. [2] While in London and Paris, he took in the progressing influence of painters Jules Bastien-Lepage and James Abbott McNeill Whistler. [2]

From 1884 and through the 1890s Roberts worked again in Victoria, in his studio at the famous studio complex of Grosvenor Chambers at 9 Collins Street, Melbourne. In 1885 he started painting and sketching excursions to what would later become outer suburbs, creating camps at Box Hill and Heidelberg, where he worked alongside McCubbin, Arthur Streeton and Charles Conder, working on representing Australia’s light, heat, space and distance. [2]

In 1896 he married 36-year-old Elizabeth (Lillie) Williamson and they had a son, Caleb. Many of his most famous paintings come from this period. Roberts was an expert maker of picture frames, and during the period 1903–1914, when he painted relatively little, much of his income apparently came from this work. Roberts spent World War I in England assisting at a hospital. In Australia, he built a house at Kallista, near Melbourne. Elizabeth died in January 1928, and Roberts remarried, to Jean Boyes, in August 1928. He died in 1931 of cancer in Kallista near Melbourne. His ashes are buried in the churchyard at Illawarra near Longford, Tasmania .

Roberts painted a considerable number of fine oil landscapes and portraits, some painted at artist camps with his friend McCubbin. Perhaps the most famous in his time were two large paintings, Shearing the Rams , now displayed in the National Gallery of Victoria and The Big Picture , displayed in Parliament House, Canberra. The Big Picture, a depiction of the first sitting of the Parliament of Australia, was an enormous work, notable for the event depicted as well as the quality of Roberts' work.

Shearing the Rams was based on a visit to a sheep station at Brocklesby in southern New South Wales, depicted the wool industry that had been Australia's first export industry and a staple of rural life. When it was first exhibited, there were immediately calls for the painting to enter a public gallery, with a Melbourne correspondent for the Sydney press stating, "if our national gallery trustees were in the least patriotic, they would purchase it." [3] Some critics did not feel that it fitted the definition of 'high art'. However, since the wool industry was Australia's greatest export industry at the time, it was a theme with which many Australian people could identify. In this painting, as one modern reviewer has said, Roberts put his formal art training to work, translating "the classical statuary into the brawny workers of the shearing shed". [4]

Roberts made many other paintings showing country people working, with a similar image of the shearing sheds in The Golden Fleece (1894), [5] a drover racing after sheep breaking away from the flock in A break away! , and with men chopping trees in Wood splitters (1886). Many of Roberts' paintings were landscapes or ideas done on small canvases that he did very quickly, such as his show at the famous 9 by 5 Impression Exhibition in Melbourne, "9 by 5" referring to the size in inches of the cigar box lids on which most of the paintings were done. Roberts had more works on display in this exhibition than anyone else.

In 1888 Roberts met Conder in Sydney and they painted together at Coogee beach. The younger Conder found these painting expeditions influential and decided to follow Roberts to Melbourne later that year to join him and Streeton at their artists’ camp at Heidelberg. While Conder painted Coogee Bay emphasising on the decorative qualities of form and colour, Roberts’ Holiday sketch at Coogee (1888) embodies his primary focus on the landscape’s natural effects. [6] It is an early testament to Roberts’ plein-air ‘impressionist’ technique, which brought out the sun’s glare on the bright blue sea, bleached white sand, dry grass and spindly seaside vegetation.

Roberts' life was dramatised in the 1985 Australian mini series One Summer Again .

A "lost" painting titled Rejected was featured in a 2017 episode of the BBC series Fake or Fortune? . It was determined by experts to be a genuine Roberts, dating from his student years in London. Roberts' granddaughter considered it a self-portrait. If so, it would make it his oldest surviving self-portrait. [7] [8] 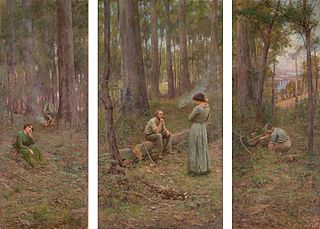 Charles Edward Conder was an English-born painter, lithographer and designer. He emigrated to Australia and was a key figure in the Heidelberg School, arguably the beginning of a distinctively Australian tradition in Western art. 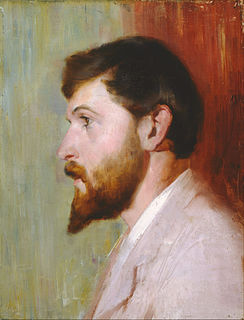 Emanuel Phillips Fox was an Australian impressionist painter. After studying at the National Gallery of Victoria Art School in Melbourne, Fox travelled to Paris to study in 1886. He remained in Europe until 1892, when he returned to Melbourne and led what is considered the second phase of the Heidelberg School, an impressionist art movement which had grown in the city during his absence. He spent over a decade in Europe in the early 20th century before finally settling in Melbourne, where he died.

Sydney Long was an Australian artist.

The Box Hill artists' camp was a site in Box Hill, Victoria, Australia favoured for plein air painting in the late 1880s by a group of artists who were part of a movement that later became known as the Heidelberg School. 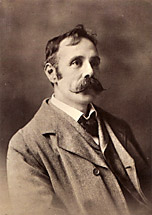 Walter Herbert Withers was an English-born Australian landscape artist and a member of the Heidelberg School of Australian impressionists. 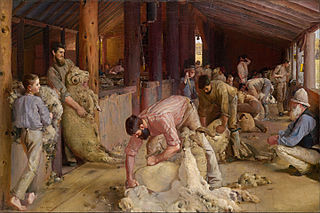 Shearing the Rams is an 1890 painting by Australian artist Tom Roberts. It depicts sheep shearers plying their trade in a timber shearing shed. Distinctly Australian in character, the painting is a celebration of pastoral life and work, especially "strong, masculine labour", and recognises the role that the wool industry played in the development of the country.

The 9 by 5 Impression Exhibition was an art exhibition in Melbourne, Australia. It opened on 17 August 1889 at Buxton's Rooms on Swanston Street and featured 183 works, the majority of which were painted by Charles Conder, Tom Roberts and Arthur Streeton of the Heidelberg School art movement, also known as Australian impressionism. The exhibition's name references the dimensions of most of the paintings—9 by 5 inches, the size of the cigar box lids upon which many of the works were painted—as well as the impressionist techniques employed by the artists. 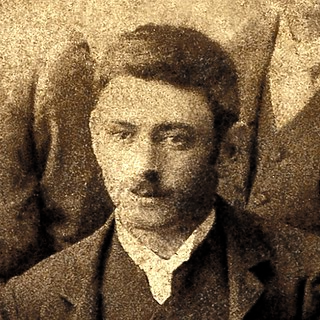 David Davies was an Australian artist who was associated with the Heidelberg School, the first significant Western art movement in Australia.

A holiday at Mentone is an 1888 painting by the Australian artist Charles Conder. The painting depicts a beach in the Melbourne suburb of Mentone on a bright and sunny day. Conder's depiction of people engaged in seaside activities and the brilliant noonday sunshine mark the painting as distinctively Australian in character.

Golden Summer, Eaglemont is an 1889 landscape painting by Australian artist Arthur Streeton. Painted en plein air at the height of a summer drought, it is an idyllic depiction of sunlit, undulating plains that stretch from Streeton's Eaglemont "artists' camp" to the distant blue Dandenong Ranges, outside Melbourne. Naturalistic yet poetic, and a conscious effort by the 21-year-old Streeton to create his grandest work yet, it is a prime example of the artist's distinctive, high-keyed blue and gold palette, what he considered "nature's scheme of colour in Australia".

Leon Pole was an Australian artist who was associated with the Heidelberg School art movement, also known as Australian Impressionism. 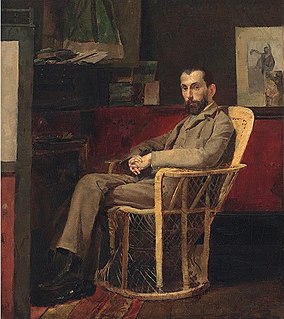 The Exhibition of Australian Art in London was a show organised by the trustees of the Art Gallery of New South Wales (AGNSW), notably Julian Ashton, and financially supported by the philanthropist Eadith Walker. Held at London's Grafton Galleries between April and September of 1898, it featured 371 artworks made in Australia by 114 artists, and was the first major exhibition of Australian art to occur internationally.

John Llewellyn Jones was an Australian artist and photographer who was associated with the Heidelberg School art movement, also known as Australian impressionism.

Thomas Humphrey was a Scottish-born Australian artist and photographer who was associated with the Heidelberg School art movement, also known as Australian impressionism.