Thomas Sullivan (18 September 1868 – 1949) was a New Zealand amateur rowing and sculling champion who later turned professional and challenged for the World Sculling Championship title. He later became a rowing coach.

The World Sculling Championship (1863–1957), evolved from the Championship of the Thames for professional scullers.

Sullivan was born in Auckland and won his first rowing race at age 13. He was a member of a widely known Wellington Rowing Club four-oared crew (W. Bridson, E. J. Rose, T. Sullivan, and T. McKay) that won all four championship titles under the auspices of the New Zealand Amateur Rowing Association during 1889–90. He also won the amateur sculling championship of the country in 1890. [1] 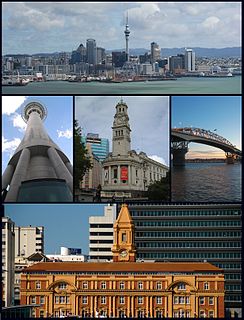 The Wellington Rowing Club is a rowing club situated on Wellington Harbour, New Zealand. The current building, is classified as a "Category I" historic place by the New Zealand Historic Places Trust.

Later he became a professional. The normal build-up races of a professional were raced with various others in Sydney. On 11 May 1891 Sullivan raced Charles Stephenson for the usual professional stake of £100 a side; they also had a side-bet of £100. The race was a title challenge for the championship of New Zealand. Stephenson started strong and was well ahead at Uhr's Point. Sullivan gradually increased his speed and was four lengths ahead at the mile mark, eventually winning easily by six lengths in a time of 23 minutes 33 seconds. See also New Zealand Sculling Championship.

Charles Stephenson was a New Zealand rower. He was born in Hobson Street, Auckland. He passed most of his boyhood at the Thames, and after leaving school went to the Northern Wairoa district, where he took to a bushman's life. His work in the kauri bushes was varied by an occasional spell as a boatman on the river, and so he got his first lessons in rowing. For three years he was in the service of the Hon. E. Mitchelson, at Dargaville, and during that time got a good deal of rough practice in rowing. His first race was rowed, with J. Wilson as a partner, in the pairs at the Wairoa Regatta in April 1887. Their principal opponents were the Brothers Brown, who were recognised at the time as the "bosses" of the river. To the surprise of everyone young Stephenson and his mate won easily. The Browns were not satisfied with their defeat, and a match was made with their conquerors for £50 a-side, to come off a month after the regatta. This had the same result, and Stephenson's reputation began to grow. In January 1888, he was one of the Northern Wairoa Whaleboat Crew which finished third at Auckland Anniversary Regatta. Waitemata winning and North Shore rowing second. After this he went back to the bush; but in November 1888, he and two friends left the Wairoa, intending to go to Tasmania. Stephenson, however, got no further than Sydney, where he determined to try his luck as a professional sculler.

Sullivan then challenged Jim Stanbury for the World Title which he had won in 1891. Sullivan was the first of the six New Zealanders who attempted to gain the World Title. On 2 May 1892 the title race took place on the Parramatta River but on a shorter than normal course, and the stake was £400 a side. A large crowd was on hand to see the race. Stanbury took an early lead. After the halfway point, Stanbury steadily increased his lead and crossed the line three lengths ahead.

Sullivan later headed to the United States and England and in 1893 he challenged George Bubear of Chelsea for the English Sculling Championship. This race was held on the Championship Course on the Thames in London. Sullivan won and later he was challenged for the title by Charles R. Harding (aka "Wag" Harding) with that race taking place on the Tyne River in February 1895. Harding won and again beat Sullivan in a return match the following September. Harding also unsuccessfully challenged Stanbury for the World Title in 1896.

The English Sculling Championship developed out of informal competitions between working watermen on rivers such as the Thames and the Tyne. Various matches were made on a casual basis but in time these were more formalised. The first recognised Champion was Charles Campbell (rower) who beat John Williams in September 1831 on the Thames. Various persons then held the Championship which was gained under the challenge system. In June 1876 Edward Trickett of Australia won the Championship and then the Title became the World Sculling Championship See this entry for a list of Champions and races, and other details, from 1831 to 1876.

Charles R. Harding was an English professional single sculler who became the Champion of England and was a contender for the World Sculling Championship. He was born in London circa 1866 and his occupation was that of a waterman. Like many of the professional English scullers, he had won the Doggett's Coat and Badge, but at 5 ft 5 ½ in and 9 st 5 lb he was not regarded as one of the heavy men. He made a name for himself in 1883, when he, at 16 years old, won the Chelsea Coat and Badge, and a year later, the Putney Coat and Badge. He was reported in the mid-1890s that “he pulls a beautiful even stroke, gets well over his sculls, while his leg-work is greatly admired.”

In the spring of 1901, Spencer Gollan, along with two professional oarsmen, George Towns and Sullivan, broke the record for rowing between Oxford and Putney along the River Thames. The distance was 104 miles and they managed to cover the distance in 13 hours 55 minutes, beating the previous record (set in 1889) by eight and a half hours. The trio had a strong stream and all the locks were in their favour, and they did not carry a coxswain.

Spencer Herbert Gollan was a sportsman who excelled in rowing and golf, and who was also a race horse owner.

George Towns was the Australian Single Sculls World Champion from 1901 to 1905 and 1906 to 1907. He was the last of the seven Australian World Sculling Champion who between them held the title almost uninterrupted from 1876 to 1909.

Sullivan attempted to win the Championship of America in August 1905 when he raced Edward Durnan of Canada in a 3-mile (4.8 km) race in Toronto. Sullivan was soundly beaten and Durnan went on to unsuccessfully challenge for the World Title.

Tom Sullivan turned to coaching and became successful. He coached crews at the Berlin Rowing Club from 1913. [2] He was interned for four years at Ruhleben [3] [4] during the First World War and afterwards spent some time coaching in the Netherlands. He returned to Berlin where he coached the German coxed four to a gold medal at the 1932 Los Angeles Olympics.

"Although a German rowing club engages an Englishman [sic!] as trainer, this is in no way a matter of national feeling. The main point is what the teacher is capable of imparting and not what mother tongue he happens to have. […] Tom Sullivan was entirely worthy of the great confidence we had in him. Of the 490 victories won by Berliner Ruderklub Tom was responsible for 224 during the eleven years he supervised the training of the club. He was known as a master of the hard English school, of strict discipline and exact method of rowing. [- – -] His work and mature art convinced everyone. He was an Englishman with an international outlook and an honest admiration for the Germans, a fascinating personality whom young and old under his jurisdiction respected and whom oarsmen from all parts of Germany were attracted. [- – -]" (From Hylton Cleaver: Sporting Rhapsody (1951), pp 48–49) 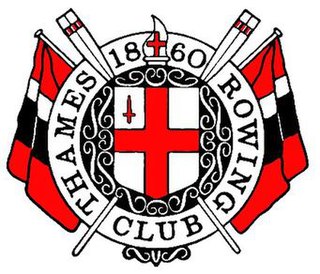 Thames Rowing Club is the joint third-oldest non-academic rowing club on the Thames and is in Putney, London. It was founded in 1860, the same year as Twickenham Rowing Club.

Joseph William Burk was an American oarsman and coach.

Rowing New Zealand is the sports governing body for rowing in New Zealand. Its purpose is to provide leadership and support to enable an environment of success for the New Zealand rowing community. This includes secondary schools, clubs, masters, universities and high performance.

William Charles Webb was the first New Zealander to hold the professional World Sculling Championship title. He was also known as Bill or Billy Webb.

For the Canadian Footballer and Commissioner, see Jake Gaudaur.

George Edwin Whelch was one of six New Zealand oarsman who attempted to win the World Professional Single Sculls title. He was born near Akaroa where he lived for most of his life. In 1903 he married Sarah Gundy and they had two children.

James Patrick Hannan was the last of six New Zealand oarsman who attempted to win the World Sculling Championship title.

William Hearn was a champion professional sculler of New Zealand, who emigrated to Victoria at a young age. He came to New Zealand in 1862, and had been a resident in Wellington since January 1876, nearly all the time having been employed by Messrs Greenfield and Stewart, timber merchants.

William Joseph O'Connor was a professional oarsman who attempted to win the World Sculling Championship. He was also a tavern-keeper and long distance walker. He was born in Toronto, son of Michael O'Connor and his wife Ellen. He died, unmarried in Toronto.

Paul Francis Rowe was an Australian representative rower and elite level rowing coach. He was an eight-time Australian national champion in both sweep oared and sculling boats across both lightweight and open divisions. He was Australia's lightweight sculling representative at the 1975 World Rowing Championships. He coached scullers and crews to three Australia national title wins and to world championships and to Commonwealth and Olympic Games.