Tom Thumb is a chain of supermarkets in the Dallas–Fort Worth metroplex. It operates under the name Tom Thumb for traditional grocery stores and Flagship Tom Thumb for higher end stores in affluent areas.[ citation needed ] It makes up part of the Southern division of Albertsons. When combined with sister chains Albertsons and Market Street, it is (as of May 2015) the number two supermarket group in the competitive Dallas/Fort Worth area (in terms of market share) behind Walmart. [2] The chain's distribution center is in Roanoke, Texas. [3]

Tom Thumb was founded in 1948 by J.R. Bost and Robert B. Cullum as Tom Thumb Food Stores after acquiring 6 Toro supermarkets (Cullum was grocery supplier to Toro when Toro folded and the owner fled the country). [4] It was once a publicly traded company on the NYSE under the name Cullum Companies. By 1956 it had grown to 20 stores. They bought 34 Hinky Dinky stores in the Midwest, 17 Pantry Food Markets in California, as well as Page Drug Stores (Tom Thumb added the "Page" to their store names after the acquisition). The freestanding Page stores were later sold to Eckerd. They also bought the gourmet specialty Simon David stores in 1963.

Tom Thumb expanded its reach to Austin, Texas, in 1972 when the grocer entered that market. [5]

Tom Thumb partnered with Wal-Mart in 1987 to create Hypermart USA stores, but the initial lack of success led them to drop out in 1991. There were several locations including Garland, Texas, and Arlington, Texas. They were the early prototype for the current Walmart Supercenter concept, though they were much larger than today's Supercenters.

In January 1989, Cullum Companies sold six of its Tom Thumb stores in Austin to Albertsons.

The company was acquired by the Randalls chain of Houston in 1992 and adopted a logo similar to Randalls, but retained the Tom Thumb name. Randalls converted the seven Tom Thumb stores in the Austin market to Randalls in January 1994, the same time it acquired and converted nine AppleTree Markets. [6] [7] [8] [9] [10] [11] The Simon David in the Arboretum Market was not converted, but it would close in December 1996 and would be converted into a Saks Fifth Avenue [12] [13] then to a Trader Joe's in June 2014. [14] Though after many customers lamented the loss of Austin's only Simon David, Randalls decided in 1998 to make its Bee Caves store a Flagship Randalls supermarket, the first in the city and the eighth in the chain. [15]

By 2001, Randalls operated 69 stores in the Dallas/Ft. Worth area under the Tom Thumb and Simon David banners.

In early 2005, Safeway was rumored to be attempting to sell the then 138-store Randalls division. [16] Instead, Safeway announced by the end of the year it would close 15 Randalls stores in the Houston area, one in Austin, and nine Tom Thumb stores in the Dallas-Fort Worth area. [17] Following the closures Randalls operated 62 Tom Thumb stores in Dallas. Safeway said the move would revitalize the Texas division and that it planned to remodel stores to fit its "Lifestyle" format and introduce proprietary products. The new Lifestyle format features an expanded selection of perishables and a number of unique[ citation needed ] offerings, including a large selection of natural and organic foods, full-service meat counters, full-service bakeries and floral design centers, as well as sushi bars and olive bars.

Beginning in 2006, some Tom Thumb stores began operating under Safeway's "Lifestyle Store" concept. Lifestyle stores carry an expanded selection of finer foods, ready-to-eat meals, and have a more upscale decor.[ citation needed ]. In January 2015, Safeway Inc. was acquired by Albertsons, and Tom Thumb (but not Randalls) was re-aligned under the Albertsons Southern Division. By this time, it had 57 stores operating under the Tom Thumb name. In March 2017, Albertsons announced that the Houston distribution center would close in late 2017 and all Texas stores (including Randalls) would be serviced from the Roanoke distribution center. [18]

Tom Thumb offers a loyalty card (Reward Card) similar to many shopper’s card programs. The loyalty card is currently good at all Albertsons Companies-owned stores. During the period after Tom Thumb was purchased by Randalls but before Randalls was purchased by Safeway, the card was accepted at both Tom Thumb and Randalls locations. The original Reward Card program was based on the Promise Club program originally developed by Tom Thumb beginning in 1985. The Promise Club program included "Electronic Checks" (EFT), special discounts for card users, prizes based on points accrued while shopping with the card, and direct mail advertising to card holder's homes. [19]

United Supermarkets is a North American supermarket grocery store chain. With headquarters in Lubbock, Texas, its roots go back to 1916, when H.D. Snell opened his first United Cash Store in Sayre, Oklahoma. Today, the chain has grown to include 95 stores in 30 Texas cities and over 10,000 workers.

Acme Markets Inc. is a supermarket chain operating 163 stores throughout Connecticut, Delaware, Maryland, New Jersey, New York, and Pennsylvania and, as of 1999, is a subsidiary of Albertsons, and part of its presence in the Northeast. It is headquartered in East Whiteland Township, Pennsylvania, near Malvern, a Philadelphia suburb. 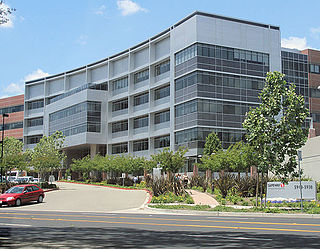 Safeway is an American supermarket chain founded by Marion Barton Skaggs in April 1915 in American Falls, Idaho. The chain provides grocery items, food and general merchandise and feature a variety of specialty departments, such as bakery, delicatessen, floral and pharmacy, as well as Starbucks coffee shops and fuel centers. It is a subsidiary of Albertsons after being acquired by private equity investors led by Cerberus Capital Management in January 2015. Safeway's primary base of operations is in the west with some stores located in the Mid-Atlantic region of the Eastern Seaboard. The subsidiary is headquartered in Pleasanton, California, with its parent company, Albertsons, headquartered in Boise, Idaho.

Central Market is an American gourmet grocery store chain owned by H-E-B Grocery Company based in San Antonio, Texas. Most locations also have a full-service kitchen, offer cooking and wine classes in their culinary school, and offer catering services. The chain has ten locations, all in Texas. Central Market was named "Outstanding Specialty Food Retailer" by Specialty Food Magazine and the National Association for Specialty Food Trade.

Shaw's and Star Market are two American grocery store chains under united management based in West Bridgewater, Massachusetts, employing about 30,000 associates in 154 total stores. 133 stores are operated under the Shaw's banner in Maine, Massachusetts, New Hampshire, Rhode Island, and Vermont; while Star Market operates 21 stores in Massachusetts, most of which are in or near Boston. Until 2010, Shaw's operated stores in all six New England states, and as of 2017 Shaw's remained the only supermarket chain with stores in five of the six, after it sold its Connecticut operations. The chain's largest competitors are Hannaford, Market Basket, Price Chopper, Roche Bros., Wegmans, and Stop & Shop. Star Market is a companion store to Shaw's; Shaw's having purchased the competing chain in 1999.

Lucky Stores is an American supermarket chain founded in San Leandro, California, in 1935. Lucky is currently operated by The Save Mart Companies in Northern California.

The Skaggs Family, starting from a small frontier town in southern Idaho, came to have an important impact on merchandising across much of the United States. During most of the 20th century, the Skaggs name was prominent on hundreds of stores throughout the West and Midwest.

Skaggs Companies was the predecessor to many famous United States retailing chains, including Safeway, Albertsons, Osco Drug, and Longs Drugs. The company owned several drugstore chains, but all of them were sold. Skaggs Cos. became American Stores in 1979.

Dominick's was a Chicago-area grocery store chain and subsidiary of Safeway Inc.. Dominick's distribution center was located in Northlake, Illinois, while its management offices were located in Oak Brook, Illinois.

Roy Furr was the president of the Furr's chain of supermarkets and restaurants. He was born in McKinney, Texas. As a boy he worked for his father C.W. Furr and brother Key Furr at the Kirkland Mercantile Company in Kirkland in Childress County, Texas. He studied at Clarendon College in Clarendon, Texas, and the University of Oklahoma at Norman.

Randalls operates 32 supermarkets in Texas under the Randalls and Flagship Randalls banners. The chain consists of 13 stores located around the Houston area and 15 stores located around the Austin area as of May 2020. Randalls today forms the nucleus of the current Houston division of Albertsons and is headquartered in the Westchase district of Houston. The office served as the headquarters of the independent Randalls company before its takeover and later the Texas division of Safeway. The Randalls distribution center was near Cypress, Texas and now is serviced by the Tom Thumb distribution in Roanoke, Texas in the Dallas–Fort Worth metroplex. 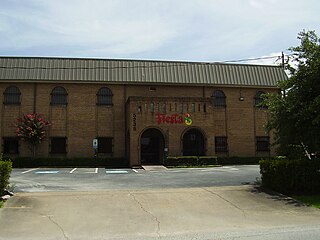 Fiesta Mart, L.L.C., formerly Fiesta Mart Inc., is a Latino-American supermarket chain based in Houston, Texas that was established in 1972. Fiesta Mart stores are located in Texas. The chain uses a cartoon parrot as a mascot. As of 2004 it operated 34 supermarkets in Greater Houston, 16 supermarkets in other locations in Texas, and 17 Beverage Mart liquor store locations. During the same year it had 7.5% of the grocery market share in Greater Houston. Many of its stores were located in Hispanic neighborhoods and other minority neighborhoods.

AppleTree Markets was a supermarket chain in Texas formed in 1969 when Safeway opened its first stores in Houston, which were spun off under the AppleTree name in 1988. The division once had 100 stores in Greater Houston and Greater Austin. By January 21, 2002, AppleTree had reduced its holdings to two stores in Bryan, Texas, where it had shifted its headquarters. One of the remaining locations was sold in 2009 and the final location, in Bryan at Highway 21 and Texas Avenue, closed in early 2012, marking the end of the chain.

Weingarten's was a supermarket chain in the Southern United States until it was acquired by Safeway in 1983. J. Weingarten, Inc. had its headquarters in what is now the East End in Houston, Texas. The company survives to this day as a real estate developer, after leaving the retail grocery business in 1980. Weingarten Realty is a developer of retail shopping centers.