After setting a Detroit club record with 61 pitching appearances in 1970, all as a relief specialist, Timmermann was voted "Tiger of the Year" by the Detroit chapter of the Baseball Writers' Association of America. During a minor league game in 1968, he tied a professional baseball record by recording the maximum of 27 infield outs in a nine-inning game for the Criollas de Caguas in the Puerto Rican Winter League.

Timmermann was born in Breese, Illinois, in 1940. [1] He grew up on a dirt farm on the Illinois prairie, [2] attended Aviston High School and subsequently enrolled in Southern Illinois University Carbondale. [1] While at Carbondale he became a member of Sigma Pi fraternity. [3]

Timmermann was signed by the Detroit Tigers as an amateur free agent in 1960 and spent nine-and-a-half years in the Tigers' farm system before making his major league debut. He began his minor league career in 1960 with the Montgomery Rebels and had stints with the Durham Bulls (1960, 1965), Duluth–Superior Dukes (1961), Knoxville Smokies (1962–63), Syracuse Chiefs (1963–66), Hawaii Islanders (1964), and Toledo Mud Hens (1967–1971). [4] In October 1968, while playing for the Criollas de Caguas in the Puerto Rican Winter League, Timmermann pitched eight shutouts, including a five-hitter in which he recorded 12 strikeouts among 27 infield outs. [5]

In 1970, and despite being demoted to Toledo for 26 days early in the season, Timmermann finished third in the American League with 27 saves and sixth in the league with 43 games finished. He appeared in 61 games, all as a relief specialist, breaking the Detroit franchise record of 55 pitching appearances set by Larry Sherry in 1966. [2] Timmermann compiled a record of 6–7 with a 4.11 ERA. [1] He was credited with converting a bullpen that manager Mayo Smith had called "the worst I've ever seen in baseball" into one that became "almost unbeatable." [6] In one sequence of 11 games in June and July, Timmermann recorded nine saves and two wins. [7] [8] At the end of the 1970 season, Timmermann was voted "Tiger of the Year" by the Detroit chapter of the Baseball Writers' Association of America — garnering 25% of the votes to edge Mickey Stanley and Al Kaline. [7] [9] In November 1970, veteran Detroit sports writer Watson Spoelstra called Timmermann's 1970 performance "the strongest bullpen job ever achieved in Detroit." [7] 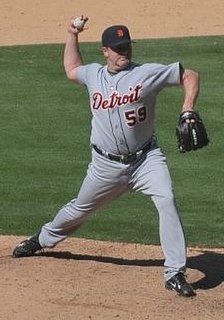 Todd Barton Jones is an American former professional baseball relief pitcher. He batted left-handed and threw right-handed. He was an effective middle reliever for several teams and also filled the role of closer, most notably with the Detroit Tigers for whom he earned 235 saves. On September 16, 2007, Jones became the 21st member of the 300-save club during his second stint with the Tigers.

Edward Mayo "Catfish" Smith was an American professional baseball player, manager, and scout, who played in Major League Baseball (MLB) for the 1945 Philadelphia Athletics. Smith had a 39-year baseball career from 1933 to 1971. He is also the namesake of the "Mayo Smith Society", the Detroit Tigers international fan club that awards the "King Tiger Award," each year. 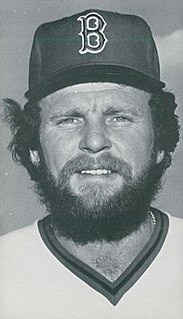 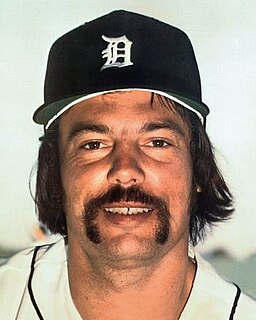 John Frederick Hiller is a Canadian former baseball relief pitcher who played 15 seasons in Major League Baseball (MLB) for the Detroit Tigers between 1965 and 1980. A native of Toronto, he joined the Tigers in 1965 and was a member of the 1968 Detroit Tigers team that won the World Series. He set a major league record by starting a game with six consecutive strikeouts in 1968.

Michael David Kilkenny was a Canadian professional baseball player who played as a pitcher in Major League Baseball. Born in Bradford, Ontario, the 6 ft 3 in (1.91 m), 175 lb (79 kg) left-hander was signed by the Detroit Tigers as an amateur free agent before the 1964 season. He played for the Tigers (1969–1972), Oakland Athletics (1972), San Diego Padres (1972), and Cleveland Indians (1972–1973). Kilkenny is perhaps best known for giving up Frank Robinson's 499th home run on September 13, 1971, and also for being one of the few players in MLB history to play for four teams in the same season. 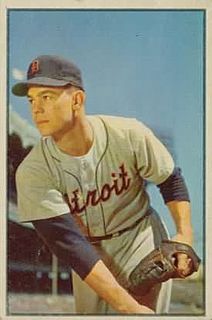 Arthur Joseph Houtteman was an American right-handed pitcher in Major League Baseball who played for 12 seasons in the American League with the Detroit Tigers, Cleveland Indians and Baltimore Orioles. In 325 career games, Houtteman pitched 1,555 innings and posted a win-loss record of 87–91, with 78 complete games, 14 shutouts, and a 4.14 earned run average (ERA). 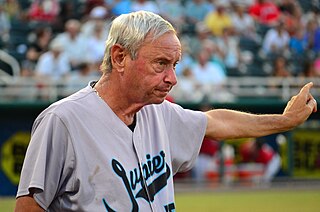 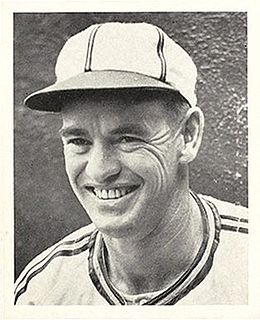 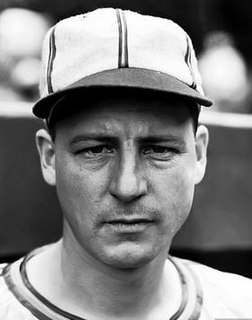 Alfred Voyle "Roxie" Lawson was an American baseball player and manager. He was a right-handed pitcher in professional baseball for 13 years from 1929 to 1941, including nine years in Major League Baseball with the Cleveland Indians (1930–1931), Detroit Tigers, and St. Louis Browns (1939–1940). During his major league career, he compiled a 47–39 win–loss record with a career earned run average (ERA) of 5.37. Lawson pitched with a right-handed side-arm delivery.

Frederick John Scherman, Jr. is a former left-handed relief pitcher in Major League Baseball from 1969 to 1976. He compiled a 33-26 record in eight major league seasons with a 3.66 earned run average (ERA), 39 saves, and 297 strikeouts.

William Clinton Zepp, is an American former professional baseball player. A right-handed pitcher, he attended the University of Michigan and later played professional baseball for four years from 1968 to 1971, including stints in Major League Baseball with the Minnesota Twins (1969–1970) and Detroit Tigers (1971). He compiled a 10-5 win–loss record and a 3.64 earned run average (ERA) in 63 major league games. He was listed as 6 feet 2 inches (1.88 m) tall and 185 pounds (84 kg).

Daryl Alan Patterson is a former right-handed baseball pitcher. He played professional baseball for 12 years from 1965 to 1975, including parts of five seasons in Major League Baseball with the Detroit Tigers (1968–1971), Oakland Athletics (1971), St. Louis Cardinals (1971), and Pittsburgh Pirates (1974). 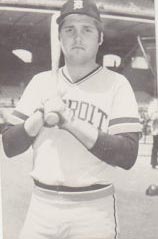 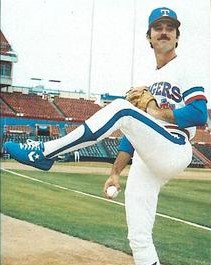 Donald Lee Leshnock, was an American professional baseball left-handed pitcher, who played in Major League Baseball (MLB) for the Detroit Tigers, in 1972. 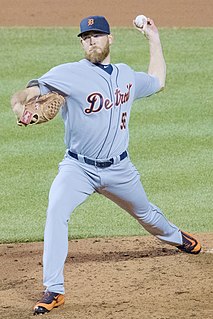 Kyle Ryan is an American professional baseball pitcher for the Chicago Cubs of Major League Baseball (MLB). He previously played for the Detroit Tigers. 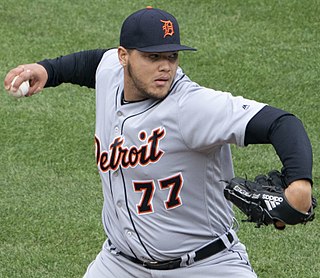