Thomas Gaskell Tutin, FRS (21 April 1908 – 7 October 1987) was Professor of Botany at the University of Leicester and co-author of Flora of the British Isles and Flora Europaea . [1]

Tutin was born on 21 April 1908 in Kew, Surrey, son of Frank Tutin, a biochemist at the Lister Institute, and his wife, Jane Ardern. He was educated at Cotham Grammar School, Bristol, then won a scholarship to Downing College, Cambridge, where he studied Biological Sciences. In 1929, while still an undergraduate, he went on a botanical expedition to Madeira and the Azores, afterwards publishing two papers on the results of his studies there. [2] [3]

After graduating in 1930 he stayed in Cambridge, interrupted by biological expeditions in 1931 to southern Spain and Spanish Morocco, and in 1933 to British Guiana, where the expedition was based on the banks of the Essequibo River. After that trip he moved to Plymouth to work in the laboratory of the Marine Biological Association, researching a disease of eel grass. In 1937 he joined the Percy Sladen Trust expedition to Lake Titicaca, resulting in a significant publication on the development and stability of lake plant communities [4]

After a short period as a demonstrator at King's College London, he became an assistant lecturer at the University of Manchester. There, in addition to teaching and fire-watching duties occasioned by the War, he developed his interests in lake algae begun during the Titicaca expedition. This led to visits to the research station of the Freshwater Biological Association near Windermere, where he met his future wife. In early 1942 Tutin joined the geographical section of the Admiralty's Naval Intelligence Division in Cambridge, which was producing a series of geographical handbooks for military use. Tutin's part in this was to survey the fenlands of the north of England for buckthorn, whose charcoal was used in certain shell fuses. [2] [3]

In 1944 Tutin was appointed lecturer in charge of the department of botany at University College, Leicester, and in 1947 he became the first professor of botany there. The College became the University of Leicester in 1957. Apart from his teaching and administrative duties, Tutin's interest now turned to taxonomy. Sir Arthur Tansley had drawn his attention to the need for a new British flora, and Tutin began a collaboration with Arthur Roy Clapham and E. F. Warburg, to write the 1591-page Flora of the British Isles, published in 1952, which quickly came to be regarded as the standard work on the subject. [2] [3] A briefer Excursion Flora from the same authors was equally successful. Emboldened by this success, Tutin's ambitions turned to wider geographical areas. At the eighth International Botanical Congress, in Paris in 1954, the need for a flora of Europe was identified, and a group of British botanists formed an editorial committee, with Tutin as chairman, which spent the next twenty and more years in collating and publishing the massive Flora Europaea .

He was President of the Botanical Society of the British Isles from 1957 to 1961. He retired from his professorship at the age of 65 in 1973, but continued to be active in Flora Europaea and other work. In 1977 he was awarded the Gold Medal of the Linnean Society of London. The University of Dublin awarded him an honorary ScD degree in 1979 (his first and only doctorate). [2] In 1982 he was elected a Fellow of the Royal Society. [5]

The standard author abbreviation Tutin is used to indicate this person as the author when citing a botanical name. [6]

Stuart Max Walters was a British botanist and academic. As a conscientious objector in the Second World War, he worked as a hospital orderly in Sheffield and Bristol. He was Curator of the Herbarium, Botany School, University of Cambridge 1949–73, Lecturer in Botany 1962–73, and for the ten years up until his retirement, 1973–83, Director of the University Botanic Garden in Cambridge, of which he wrote a history. He was a Research Fellow at St John's College, Cambridge 1948-51 and Fellow of King's College, Cambridge 1964–84.

The Flora Europaea is a 5-volume encyclopedia of plants, published between 1964 and 1993 by Cambridge University Press. The aim was to describe all the national Floras of Europe in a single, authoritative publication to help readers identify any wild or widely cultivated plant in Europe to the subspecies level. It also provides information on geographical distribution, habitat preference, and chromosome number, where known. 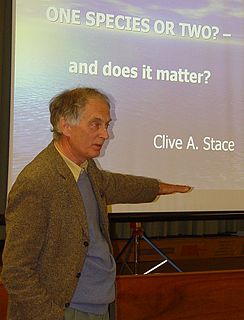 Clive Anthony Stace is a British botanist and botanical author. His academic career was based at the University of Leicester, where he held the post of Professor of Plant taxonomy. He is a past president of the Botanical Society of Britain and Ireland.

Arthur Roy Clapham, CBE FRS, was a British botanist. Born in Norwich and educated at Downing College, Cambridge, Clapham worked at Rothamsted Experimental Station as a crop physiologist (1928–30), and then took a teaching post in the botany department at Oxford University. He was Professor of Botany at Sheffield University 1944–69 and vice chancellor of the university during the 1960s. He coauthored the Flora of the British Isles, which was the first, and for several decades the only, comprehensive flora of the British Isles published in 1952 and followed by new editions in 1962 and 1987. In response to a request from Arthur Tansley, he coined the term ecosystem in the early 1930s.

Selaginella selaginoides is a non-flowering plant of the spikemoss genus Selaginella with a wide distribution around the Northern Hemisphere. It resembles a moss in appearance but is a vascular plant belonging to the division Lycopodiophyta. It has a number of common names including lesser clubmoss, club spikemoss, northern spikemoss, low spikemoss and prickly mountain-moss. This plant has one close relative, Selaginella deflexa, native to Hawaii. These two plants form a small clade that is sister to all other Selaginella species.

Sir Arthur William Hill was Director of the Royal Botanic Gardens, Kew, and a noted botanist and taxonomist. 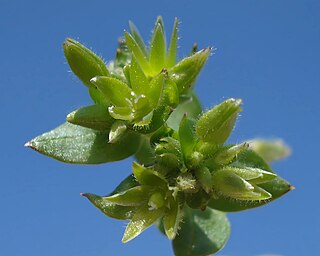 Stellaria pallida, commonly known as lesser chickweed, is an annual herbaceous plant in the flowering plant family Caryophyllaceae. It is native to Europe and is an introduced species in North America.

Charles Edward Moss, was an English-born South African botanist, the youngest son of a nonconformist minister, and is noted for being the editor of the first two parts of The Cambridge British Flora published in 1914 and 1920. The Cambridge British Flora, under the editorship of Moss, was intended to be a ten-volume survey of the flora of Britain, with contributions by specialists in particular genera. The two volumes that saw publication were of a very high standard, but the project was subsequently abandoned.

Suaeda vera, also known as shrubby sea-blite, shrubby seablight or in the USA sometimes as alkali seepweed, is a species of flowering plant in the family Amaranthaceae. It is a small shrub, with very variable appearance over its wide range. It is a halophyte, and occurs in arid and semi-arid saltflats, salt marshes and similar habitats.

Edmund Frederic "Heff" Warburg was an English botanist, known as the co-author of two important British floras. The standard author abbreviation E.F.Warb. is used to indicate this person as the author when citing a botanical name.

David Allardice Webb was an Irish botanist and chair of botany at Trinity College, Dublin from 1949 to 1966. He was son of George and Dr Ella Webb. In Ireland he had studied under Henry Horatio Dixon and also studied in the United Kingdom. In addition to botany he edited a history of Trinity College with R. B. McDowell and published a book on the history of art in Trinity College. In 1982 he received the Boyle Medal of the Royal Dublin Society. His botanical specialties included his work as a leading taxonomist of Saxifraga. He died in a car accident on his way to the University of Reading's herbarium. The 8th edition of An Irish Flora was renamed Webb's An Irish Flora in his honour.

David Henriques Valentine was a British botanist and plant taxonomist.

Winifred Anne Tutin FRS was a British limnologist, and biologist.

Harry John Betteley Birks (John) is a botanist and emeritus professor at the University of Bergen and University College London. He is best known for his work on the development of quantitative techniques in Quaternary palaeoecology. He has researched the vegetational and environmental history over the past 10–20,000 years in many parts of the world, including Norway, Sweden, UK, Minnesota, the Yukon, Siberia, and Tibet.