Thomas Henry Wade was an English cricketer active from 1929 to 1950 who played for Essex in 321 matches, mainly as wicketkeeper. Wade was born in Maldon, Essex on 24 November 1910 and died at Colchester on 25 July 1987. He was a lefthanded batsman who also bowled usefully as an off-spinner. In his career as a wicketkeeper, he held 414 catches and completed 177 stumpings. He scored 5,024 summary of Essex that season that he "kept wicket with quiet efficiency". [1]

Essex County Cricket Club is one of eighteen first-class county clubs within the domestic cricket structure of England and Wales. It represents the historic county of Essex. Founded in 1876, the club had minor county status until 1894 when it was promoted to first-class status pending its entry into the County Championship in 1895, since then the team has played in every top-level domestic cricket competition in England. Essex currently play all their home games at the County Cricket Ground, Chelmsford. The club has formerly used other venues throughout the county including Lower Castle Park in Colchester, Valentines Park in Ilford, Leyton Cricket Ground, the Gidea Park Sports Ground in Romford, and Garon Park and Southchurch Park, both in Southend. Its limited overs team is called the Essex Eagles, whose team colours are all-blue. 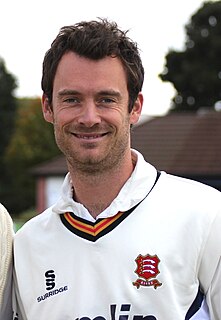 James Savin Foster is an English cricket coach and former cricketer. A wicket-keeper who played seven Tests and 11 One Day Internationals in 2001–02 and 2002–03.

Bradley James Haddin, is a former Australian cricketer, vice-captain and coach who represented Australia in all three forms of international cricket. He also played for the New South Wales Blues in both domestic first class and list A cricket. Haddin is a right-handed batsman and wicket-keeper. Haddin was a member of the Australian World cup winning squad at the 2015 Cricket World Cup. He also played for the Sydney Sixers in the Big Bash League. He also became the Assistant Head Coach for Sunrisers Hyderabad in Indian Premier League 2020.

James Michael Parks is an English former cricketer. He played in forty six Tests for England, between 1954 and 1968. In those Test, Parks scored 1,962 runs with a personal best of 108 not out, and took 103 catches and made 11 stumpings.

Ronald Eustace Grieveson OBE was a South African cricketer who played in two Tests in 1938–39. He was born and died in Johannesburg, South Africa. He attended Parktown Boys' High School in 1922 and thereafter attended St John's College, Johannesburg from 1923 until 1926 where he matriculated.

Brian Taylor was an English cricketer who played for and captained Essex.

The 1991 English cricket season was the 92nd in which the County Championship had been an official competition. West Indies and England drew 2–2 in the main Test series. Sri Lanka also toured England and played one Test which England won. The Britannic Assurance County Championship was won by Essex.

The South African cricket team toured England in the 1951 season to play a five-match Test series against England.

The South African cricket team toured England in the 1998 season to play a five-match Test series against England.

Henry Yarnold, known as Hugo, was an English first-class cricketer who became a Test cricket umpire.

The West Indies cricket team toured England in the 1957 season to play a five-match Test series against England.

Rayner John Blitz, was a cricketer who played five first-class matches and one List A match for Somerset in 1986.

Sydney Maurice Brown was an English cricketer active from 1937 to 1955 who played for Middlesex in 329 first-class matches as an opening batsman. He was born in Eltham, Kent, and died at Rickmansworth, Hertfordshire, aged 70.