Thomas St. Germain Whitecloud II (8 October 1914 – 1972) was a Chippewa writer and doctor. One of the founding members of the Association of American Indian Physicians, he innovated several techniques in spine surgery. [1]

He was born in New York City, October 8, 1914. His mother was white and his father, Thomas S. Whitecloud, was Chippewa and a graduate of the Yale Law School. When the Whiteclouds divorced, and Thomas's father returned to the Lac Du Flambeau Reservation in Wisconsin, to remarry and raise a family, Thomas St. Germain Whitecloud remained with his mother, but he seems to have spent time on the reservation as well.

The younger Whitecloud encountered difficult times growing up. He was in and out of public schools as well as federal Indian schools in Albuquerque, Chilocco, and Santa Fe. He made an unsuccessful attempt at college studies at the University of New Mexico but finally settled down to serious study at the University of Redlands, where he also met and married Barbara Ibanez. Meanwhile, during his youth, he had been a farm worker, truck driver, mechanic, handyman, and boxer, among others.but his father divorced and remarried, and he was raised on the Lac du Flambeau Indian Reservation near Woodruff, Wisconsin. Whitecloud studied in New Mexico and California, receiving his degree in medicine from Tulane University. Throughout his life, he worked with institutions like the Department of Health, Education, and Welfare to further Indian causes. He lived in Louisiana and Texas, and was a consultant for the Texas Commission on Alcoholism and Drug Abuse for Indians at the time of his death in 1972.[ citation needed ]

"Blue Winds Dancing" (1938), Whitecloud's most famous story,[ citation needed ] is about a young man's struggle to exist in ancient and modern America. It consists of a lyrical account of his journey home, and is anthologized in the Heath Anthology of American Literature. [2] The story stands out in contemporary literature for its acceptance, lyrical prose, vivid imagery, and social observations.[ citation needed ] Whitecloud is cited as the author of a prayer to the Father, the Creator, which emphasized Indigenous spirituality in relation to nature.

The Wisconsin Walleye War became the name for late 20th-century events in Wisconsin in protest of Ojibwe hunting and fishing rights. In a 1975 case, the tribes challenged state efforts to regulate their hunting and fishing off the reservations, based on their rights in the treaties of St. Peters (1837) and La Pointe (1842). On August 21, 1987, the U.S. District Court Judge Barbara Crabb ruled that six Ojibwe (Chippewa) tribal governments had the right under these treaties for hunting and fishing throughout their former territory. 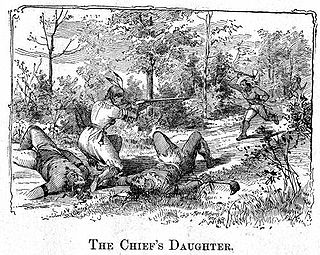 Hanging Cloud was an Ojibwe woman who was a full warrior among her people, and claimed by the Wisconsin Historical Society as the only woman to ever become one. She was the daughter of Chief Nenaa'angebi and his wife Niigi'o. Aazhawigiizhigokwe was of the Makwa-doodem, and was born and lived most of her life at Rice Lake, Wisconsin. Her community became part of the Lac Courte Oreilles Band of Lake Superior Chippewa Indians after the 1854 Treaty of La Pointe.

Pillager Band of Chippewa Indians are a historical band of Chippewa (Ojibwe) who settled at the headwaters of the Mississippi River in present-day Minnesota. Their name "Pillagers" is a translation of Makandwewininiwag, which literally means "Pillaging Men". The French called them Pilleurs, also a translation of their name. The French and Americans adopted their autonym for their military activities as the advance guard of the Ojibwe in the invasion of the Dakota country. They settled first on Leech Lake and gradually pushed westward from that point. 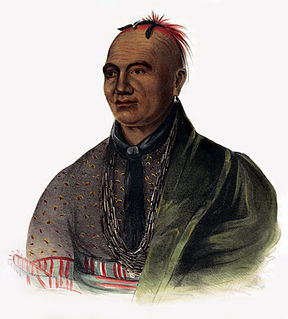 The Sokaogon Chippewa Community, or the Mole Lake Band of Lake Superior Chippewa, is a band of the Lake Superior Chippewa, many of whom reside on the Mole Lake Indian Reservation, located at 45°29′52″N88°59′20″W in the Town of Nashville, in Forest County, Wisconsin. The reservation is located partly in the community of Mole Lake, Wisconsin, which lies southwest of the city of Crandon.

Chief Buffalo was a major Ojibwa leader born at La Pointe in the Apostle Islands group of Lake Superior, in what is now northern Wisconsin, USA. 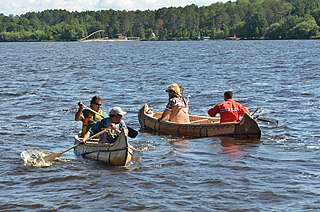 The Sandy Lake Tragedy was the culmination in 1850 of a series of events centered in Sandy Lake, Minnesota, that resulted in the deaths of several hundred Lake Superior Chippewa. Officials of the Zachary Taylor Administration and Minnesota Territory sought to relocate several bands of the tribe to areas west of the Mississippi River. By changing the location for fall annuity payments, the officials intended the Chippewa to stay at the new site for the winter, hoping to lower their resistance to relocation. Due to delayed and inadequate payments of annuities and lack of promised supplies, about 400 Ojibwe, mostly men and 12% of the tribe, died of disease, starvation, and freezing. The outrage increased Ojibwe resistance to removal. The bands effectively gained widespread public support to achieve permanent reservations in their traditional territories.

The Lake Superior Chippewa were a large historical band of Ojibwe (Anishinaabe) Indians living around Lake Superior; this territory is considered part of northern Michigan, Wisconsin, and Minnesota in the United States. They migrated into the area by the seventeenth century, encroaching on the Eastern Dakota people who historically occupied the area. The Ojibwe defeated the Eastern Dakota and had their last battle in 1745, after which the Dakota Sioux migrated west into the Great Plains. While sharing a common culture and Anishinaabe language, this group of Ojibwe was highly decentralized, with at least twelve independent bands in this region.

Treaty of St. Peters may be one of two treaties conducted between the United States and Native American peoples, conducted at the confluence of the Minnesota River with the Mississippi River, in what today is Mendota, Minnesota.

Thomas Leo "Ted" St. Germaine was an American football player, coach, and lawyer. He served as the head football coach at Villanova College—now known as Villanova University—for one season, in 1913, compiling a record of 4–2–1. Germaine played professionally in the National Football League (NFL) during the 1922 season. That season, he joined the NFL's Oorang Indians, a team based in LaRue, Ohio, which was composed solely of Native Americans, and coached by Jim Thorpe. St, Germaine was qualified to play for the Indians since he was a Chippewa. 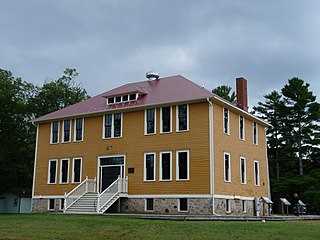 The Government Boarding School at Lac du Flambeau in Lac du Flambeau, Wisconsin was a school where native American children - mostly Ojibwe - were taken from their families and their culture and taught mainstream American culture from 1895 to 1932. It was added to the National Register of Historic Places in 2005.

Philip Bergin Gordon (Ti-Bish-Ko-Gi-Jik) Chippewa ("Ojibwe') was the second American Indian Catholic priest ordained in the United States. The first was Stephen Negahnkwet, a Potawatomi, in Oklahoma. A staunch advocate for Native American rights, critical of the Bureau of Indian Affairs, he was President of the Society of American Indians and also served on the "Committee of One Hundred" for U.S. president Calvin Coolidge. Following service at the Lac Courte Oreilles Indian Reservation, Gordon was assigned the pastorate of St. Patrick's Church in Centuria, Wisconsin in 1924, a position he held until his death.