Willis made his provincial debut for Otago in 1999 and his Super Rugby debut for the Highlanders the following year, but found playing time difficult to come by in the same sides as incumbent All Black hooker Anton Oliver and fellow rising star Andrew Hore. 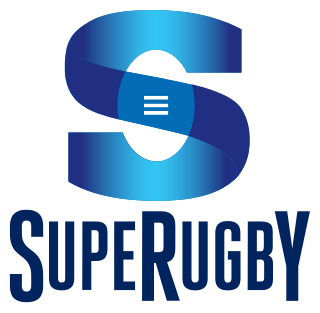 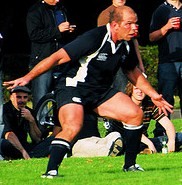 Anton David Oliver is a retired New Zealand rugby union player. Previously, he played as a hooker for Marlborough and Otago in the National Provincial Championship and Air New Zealand Cup, and spent twelve seasons with the Highlanders in Super Rugby. He earned 59 caps for his country and for a period was All Blacks captain.

Andrew Keith Hore is a former New Zealand rugby union player. He played for the All Blacks between 2002 and 2013. His position was hooker. He notably played for the Hurricanes in Super Rugby, but also represented the Highlanders and the Crusaders. When available, he played for Taranaki in the ITM Cup, now known as the Mitre 10 Cup. Hore retired from international rugby after playing Ireland during the 2013 All Black Northern Hemisphere tour, with a total of 83 test caps to his name. In 2008 Hore received the Kelvin Tremain Trophy for Rugby player of the year.

Injury to Oliver saw Willis finally see a starting role for the Highlanders in the 2002 Super 12 season, and he impressed enough that he was starting Tri Nations games for the All Blacks following the campaign. However, with Oliver back healthy Willis again found himself on the reserve bench for both the 2003 Super Rugby and NPC seasons. Despite a lack of playing time, he still managed to show his substantial ability in limited minutes - in the 2003 NPC he scored 5 tries despite making only 2 starts in 9 total appearances.

The 2002 Super 12 season was the seventh season of the Super 12, contested by teams from Australia, New Zealand and South Africa. The season ran from February to May 2002, with each team playing all the others once. At the end of the regular season, the top four teams entered the playoff semi finals, with the first placed team playing the fourth and the second placed team playing the third. The winner of each semi final qualified for the final, which was contested by the Crusaders and the Brumbies at Jade Stadium, Christchurch. The Crusaders won 31 – 13 to win their fourth Super 12 title.

Following the 2003 provincial season, Willis transferred to Waikato and the Chiefs in a bid to get more consistent playing time. However, shortly thereafter he suffered complications following a back injury, which forced him out of rugby for over a year. [1]

The Waikato Rugby Union (WRU) is the official governing body of rugby union in the Waikato area in the North Island of New Zealand. Its senior representative team competes in the Mitre 10 Cup, and won the inaugural Air New Zealand Cup in 2006.

After missing the entire 2005 Super 12 season, Willis returned to hold down the starting position at hooker for the Chiefs for another three seasons through 2008.

The 2005 Super 12 season was the tenth season of the Super 12, contested by teams from Australia, New Zealand and South Africa. The season ran from February to May 2005, with each team playing all the others once. At the end of the regular season, the top four teams entered the playoff semi finals, with the first placed team playing the fourth and the second placed team playing the third. The winner of each semi final qualified for the final, which was contested by the Canterbury Crusaders and New South Wales Waratahs at Jade Stadium, Christchurch. The Crusaders won 35 – 25 to win their fifth Super 12 title.

However, it was as captain of Waikato that he achieved his greatest triumphs, as he led the province to the 2006 Air New Zealand Cup championship as well as a Ranfurly Shield triumph over North Harbour in 2007.

The Ranfurly Shield, colloquially known as the Log o' Wood, is a trophy in New Zealand's domestic rugby union competition. First played for in 1904, the Shield is based on a challenge system, rather than a league or knockout competition as with most football trophies. The holding union must defend the shield in challenge matches, which are played at the shield holders home venue, and if the challenger is successful in their challenge they will become the new holder of the Shield.

The North Harbour Rugby Union (NHRU), commonly known as North Harbour or simply Harbour, is a provincial rugby team that was formed in 1985 by clubs that left the Auckland Rugby Union. It competes in the Mitre 10 Cup, the successor to the country's former domestic competition, the National Provincial Championship (NPC).

On 23 April 2008, Willis confirmed he was joining Welsh Celtic League side Newport Gwent Dragons for the following European season. [2]

After arriving in Wales, he was quickly appointed team captain and made 25 appearances in his first season for the club.

Willis retired from rugby in January 2012 due to injury. [3]

Willis was first selected to the All Blacks for their end of year tour in 2001, where he made starts - and was named team captain - against Ireland A and Scotland A. However, neither of these contests were considered test matches.

After a strong 2002 Super 12 season, he was again selected to the All Blacks for that year's domestic and Tri Nations tests. He made his test debut on 8 June 2002, starting in a 64–10 win over Italy in Hamilton. [4] He would go on to make another four appearances for New Zealand that year.

However, these would be his final international appearances. Injury ruled him out of the 2002 end of year tour, and he was left off the 2003 Rugby World Cup squad. His long injury layoff in 2004-2005 would then ultimately serve to permanently end his international career.

Joshua Adrian Kronfeld is a TV presenter and a former rugby union footballer who represented New Zealand at international level and Otago, the Highlanders and Leicester at first-class level. During his international career, Kronfeld played in 56 games for the All Blacks, gaining 54 test caps, including appearances at both the 1995 and 1999 Rugby World Cups.

Taine Randell is a retired New Zealand rugby union player. He was a versatile loose forward and a former All Blacks captain. He is of Ngāti Kahungunu descent.

Quinton James Cowan is a New Zealand rugby union footballer. He first played for the All Blacks – New Zealand's national team – during the 2004 tour to the United Kingdom and France, and played his last Test match for the side during the 2011 Rugby World Cup. Cowan was born in Gore and attended Gore High School. After he left school a strong season for the Mataura Rugby Club saw him selected to play provincially for the Southland Stags in 2000. He was selected for the Highlanders in the 2003 Super 12 season, and continued to play for both the Highlanders and Southland until signing for Gloucester in 2012.

Conrad Gerard Smith is a New Zealand rugby union footballer who plays predominantly at centre. He captained the Hurricanes in Super Rugby, and played for New Zealand from 2004 until 2015. He was a key member of New Zealand's 2011 and 2015 Rugby World Cup winning teams. Following the 2015 World Cup he retired from international rugby and took up a professional rugby contract in France.

Mark Darren "Sharky" Robinson is a retired rugby union footballer who internationally for the All Blacks between 1997 and 2001. He played provincial rugby in New Zealand for North Harbour and Super 12 rugby for the Waikato Chiefs and then the Auckland Blues. He briefly played rugby league for the New Zealand Warriors before moving overseas to play with Northampton and then London Wasps, both in England. He retired from professional rugby in 2010. 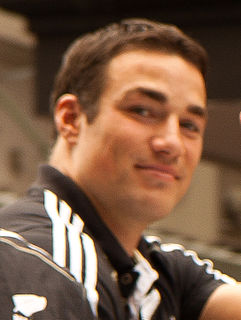 Richard Kahui is a New Zealand rugby union player. He plays for Toshiba Brave Lupus in the Top League. He previously played for the Highlanders and Chiefs in Super Rugby, Waikato in the National Provincial Championship, and New Zealand internationally. He plays at centre and wing.

Mahonri Schwalger is a former Samoan professional rugby union footballer who last played in New Zealand for the Chiefs in the Super Rugby competition and for Counties Manukau in the National Provincial Championship. He captained the Samoan national team at the 2011 Rugby World Cup.

Regan Matthew King is a New Zealand rugby union player who plays as a centre. He currently plays for Mid Canterbury in the Heartland Championship and Neath RFC in the Welsh Premier Division. He holds a British passport thanks to his British-born father, Paul King.

Gregory James Smith is a former Fijian rugby union footballer. He played as a hooker.

Ioakimo "Lucky" Mulipola is a Samoan rugby union player. He is a winger who plays his rugby in New Zealand. Mulipola made his provincial debut in 2003 for Nelson Bays, and his international debut for Samoa in 2009.

Jamie Mackintosh is a New Zealand professional rugby union player currently playing with Section Paloise in the French Top 14 competition. Previously, he played for Southland, Highlanders, and Chiefs in New Zealand, and Montpellier in France. He was also selected for the All Blacks 2008 End of year tour to travel to Hong Kong and Britain. He attended Southland Boys High School.

Royce Kevin Willis was an international rugby union player who represented New Zealand in 12 matches between 1998 and 2002.

Benjamin Robert Smith is a New Zealand rugby union player. He plays for the Highlanders in the Super Rugby competition and for Otago in the ITM Cup. He made his debut for New Zealand in 2009 and has won 66 international caps. He was a key member of the 2015 Rugby World Cup-winning team. Smith is currently vice-captain of the All Blacks, having been appointed in 2016. He plays as a fullback and wing, but has occasionally played as a centre and halfback.

Liam Coltman is a New Zealand rugby union player who plays as a hooker for Otago in New Zealand's domestic Mitre 10 Cup and the Highlanders in the international Super Rugby competition.

Luke Charles Whitelock is a New Zealand rugby union player who currently plays as a loose forward for Canterbury in New Zealand's domestic Mitre 10 Cup and the Highlanders in the international Super Rugby competition.

Nathan Paul Harris is a New Zealand rugby union player who currently plays as a hooker for Bay of Plenty in the ITM Cup and the Chiefs in Super Rugby.