Wright was signed by the Boston Red Sox as an amateur free agent in 1942. After his first professional season, he entered the United States Army Air Forces, where he served in the Pacific Theater of Operations during World War II and missed the 1943–45 seasons. [1] He returned to baseball in 1946, and led the Class C Carolina League in batting average (.380) and hits (an even 200), while making the CL All-Star team. His performance earned him a three-level promotion to the Double-A Southern Association for 1947, where he batted .325 and was also named an All-Star. Then, in 1948, he hit over .300 (at .307) for a third straight season, this time in the Triple-A American Association. On September 15, 1948, he made his Major League debut with the Red Sox—tripling as a pinch hitter in his first big-league at bat. [2] Wright then returned to Triple-A for the entire 1949 campaign. He won the American Association batting championship (hitting .368) and collected 200 hits, second in the league. During the September 1949 pennant race, he made five pinch-hitting appearances for the Red Sox.

Wright spent all of 1950 on Boston's roster, hitting .318 in part-time and pinch-hitting duty, with 54 games played and 115 plate appearances. Of his 34 hits, only seven went for extra bases, all doubles. He then returned to Triple-A for much of 1951, getting into only 28 games with Boston, 13 as a starting outfielder, and batting only .222. After the season, he was traded to the St. Louis Browns on November 28, 1951. In 1952, Wright would set personal bests in games played (89) and hits (50), but he batted only .253 with two home runs and the Browns traded him after 29 games in St. Louis to the Chicago White Sox on June 15. He was a reserve outfielder for the ChiSox for the next year and a half, playing behind Minnie Miñoso, Sam Mele and Jim Rivera. During spring training on March 27, 1954, he was traded for the third and last time, to the Washington Senators. But Wright was still unable to break into the everyday lineup, appearing in 76 games, half of them as a starting outfielder.

He spent most of 1955 and 1956 in minor league baseball, except for eight appearances as a pinch hitter and one game for Washington as a pinch runner at the tail end of 1955 and the beginning of 1956. On April 18, 1956 he played his final game after nine seasons in the big leagues. [3] Wright retired after the 1957 minor league season.

Roger Maxwell "Doc" Cramer was an American center fielder and left-handed batter in Major League Baseball who played for four American League teams from 1929 to 1948.

George Edward Thomas Jr. is a retired American professional baseball player. Primarily an outfielder, he played at least one game at every position except pitcher during a 13-year career in Major League Baseball for the Detroit Tigers, Los Angeles Angels (1961–63), Boston Red Sox (1966–71) and Minnesota Twins (1971). He also was an assistant coach (1972–78) and head baseball coach (1979–81) at his alma mater, the University of Minnesota, after his active career ended. The native of Minneapolis threw and batted right-handed, stood 6 feet 3 inches (1.91 m) tall and weighed 190 pounds (86 kg). 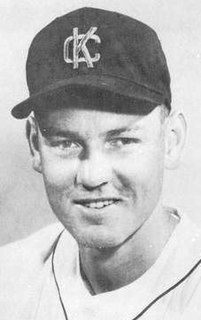 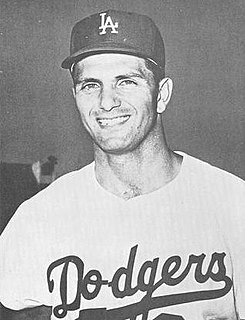 Charles Abraham Essegian is an American former professional baseball left fielder. He appeared in 404 games in Major League Baseball (MLB) over six seasons (1958–1963) for the Philadelphia Phillies, St. Louis Cardinals, Los Angeles Dodgers, Baltimore Orioles, Kansas City Athletics, and Cleveland Indians. During the 1959 World Series, Essegian, then with the Dodgers, set a Series record with two pinch-hit home runs against the Chicago White Sox. The mark would be matched by Bernie Carbo of the Boston Red Sox, who a hit pair of pinch-hit homers against the Cincinnati Reds in the 1975 Series. 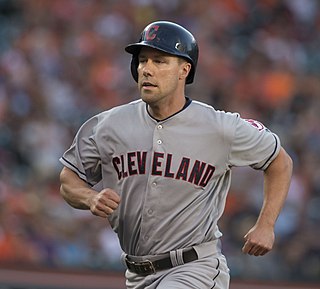 Matthew Daniel Batts was an American professional baseball player. He played in Major League Baseball (MLB) as a catcher from 1947 through 1956 for the Boston Red Sox, St. Louis Browns, Detroit Tigers, Chicago White Sox and Cincinnati Reds, with brief trades to Baltimore and Cleveland. A slap hitter, Batts played mostly backup roles over the course of his career; during parts of ten MLB seasons, he appeared in 546 games with a .269 batting average, 26 home runs, and 219 runs batted in.

Delbert Leon Culberson was an American professional baseball player. He played as an outfielder in Major League Baseball (MLB) from 1943 to 1948 for the Boston Red Sox and the Washington Senators. Listed at 5 feet 11 inches (1.80 m) and 180 pounds (82 kg), he both batted and threw right-handed.

José Vidal Nicolás, nicknamed "Papito", was a Dominican Major League Baseball outfielder. He was signed by the San Francisco Giants as an amateur free agent before the 1958 season. He played for the Cleveland Indians (1966–1968) and Seattle Pilots (1969). He also played one season in Japan for the Nishitetsu Lions (1971). During a 4-year major league baseball career, He hit .164, three home runs, and 10 runs batted in. 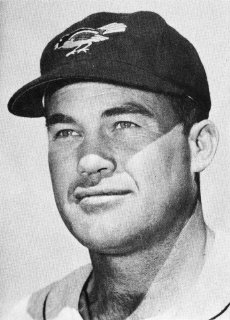 David Earl Philley was an outfielder who played in Major League Baseball. A switch hitter who threw right-handed, he debuted on September 6, 1941 and played his final game on August 6, 1962. He was born in Paris, Texas.

Dick Corwin Whitman was an American professional baseball player. The outfielder, a native of Woodburn, Oregon, appeared in 285 games in Major League Baseball over all or parts of six seasons (1946–1951) for the Brooklyn Dodgers and Philadelphia Phillies. He batted left-handed, threw right-handed, and was listed as 5 feet 11 inches (1.80 m) tall and 170 pounds (77 kg).

Wayne Tyrone Housie is a former Major League Baseball outfielder. Listed at 5'9", 165 lb., he was a switch-hitter and threw right-handed.

James Edward Hicks was an American professional baseball player. He played in Major League Baseball as an outfielder and first baseman from 1964 to 1970 and in the Nippon Professional Baseball league from 1973 to 1974. He played in 93 games over all or parts of five seasons in Major League Baseball for the Chicago White Sox, St. Louis Cardinals and the California Angels. Born in East Chicago, Indiana, Hicks attended the University of Illinois at Urbana–Champaign. He threw and batted right-handed, stood 6 feet 3 inches (1.91 m) tall and weighed 205 pounds (93 kg). 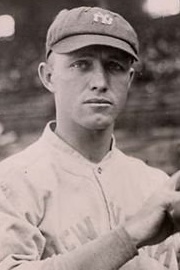 Samuel Bruce Vick was an American professional right fielder in Major League Baseball. He played for the New York Yankees from 1917 to 1920, and the Boston Red Sox in 1921. He stood 5 ft 10 in (1.78 m), and weighed 163 lb., and he batted and threw right-handed. He was born in Batesville, Mississippi, and attended Millsaps College in Jackson, Mississippi.

Mitchell Austin Moreland is an American professional baseball first baseman who is currently a free agent. He has played in Major League Baseball (MLB) for the Texas Rangers, Boston Red Sox and San Diego Padres. Moreland attended Mississippi State University and was drafted by the Rangers as a first baseman and outfielder in the 17th round of the 2007 MLB draft. Listed at 6 feet 2 inches (1.88 m) and 230 pounds (100 kg), Moreland both bats and throws left-handed. 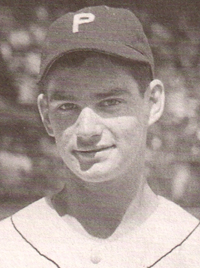 Ralph Joseph "Putsy" Caballero was an American professional baseball infielder who played in Major League Baseball (MLB) in parts of eight seasons, all for the Philadelphia Phillies, during the Whiz Kids era. He holds the record as the youngest person in MLB history to appear at third base.