Toma Raspasani (Italian : Tomasso Raspassani, c. 1648-17??) was an Albanian Franciscan friar and vicar, subordinate Pjetër Bogdani, Archbishop of Skopje, with whom he organized an Albanian pro-Austrian movement that would fight in the Great Turkish War against the Ottoman Empire.

He was born in 1648. [1] [2] His definite birthplace has not been established, and it is thought to have been in either Skopska Crna Gora, or the surroundings of Prizren or Peć. [1] [2] According to British author Noel Malcolm it was Skopska Crna Gora. [3] At the time these were part of the Ottoman Sanjak of Üsküb and Sanjak of Prizren. He most likely enrolled in the primary school and theological school of Janjevo. [1] [2] Toma was educated by Jesuits at Illyrian college in Loreto. [4] After studying in Italy he was appointed parish priest in Prizren in 1679. [3] According to different sources, he spoke Albanian, Serbian, Latin and Italian.[ citation needed ]

With the outbreak of the Great Turkish War, the Austrian Empire sought allies in Southeastern Europe. On November 1, [5] or November 6, General Enea Silvio Piccolomini reached Prizren, where he according to sources was received by "an archbishop and a patriarch". [6] This has been interpreted by some Yugoslav historians as being Albanian Catholic Pjetër Bogdani, Archbishop of Skopje, and Arsenije III Čarnojević, the Serbian Patriarch. [5] [7] [8] Those sources claim that Piccolomini consulted with Patriarch Arsenije and Archbishop Bogdani about the organization of newly recruited rebels and providing food for them, and Raspasani helped Piccolomini a lot, as the negotiations went through him as he knew Latin and Italian. [9] However the patriarch could not have been the Serbian Patriarch, since "he was absent from the region at that time". [6] Pjetër Bogdani seemed to have played the leading role in organizing the Albanian pro-Austrian movement in the region, while Raspasani was also prominent. [3] According to some sources, Raspasani was the one who gathered the Albanians by himself. [8]

Piccolomini died in Prizren of plague on November 9, 1689, during negotiations. [10] Veterani succeeded Piccolomini. [10] Raspasani substituted the deceased Bogdani (1689†) as the leader of the Albanian pro-Austrian movement. [11]

The Austrians began fortifying Niš,[ when? ] and Lieutenant colonel Antonije Znorić returned from Belgrade to Niš with 2,500 infantry of the Serbian Militia after the order of Veterani; Raspasani was also with them, as a translator. [12] [13]

Raspasani wrote in 1693 that many of the Catholics of Kosovo had left for Budapest, "where most of them died, some of hunger, others of disease". [14]

Danilo I Petrović-Njegoš was the Metropolitan of Cetinje between 1697 and 1735, and a founder of the House of Petrović-Njegoš, which ruled Montenegro from 1697 to 1918.

Gjon Kastrioti, was an Albanian nobleman, member of the Kastrioti family, and the father of Gjergj Kastrioti Skanderbeg. He governed the territory between the Cape of Rodon and Debar and had at his disposal an army of 2,000 horsemen.

Mijaks are an ethnographic group of Macedonians who live in the Lower Reka region which is also known as Mijačija, along the Radika river, in western North Macedonia, numbering 30,000-60,000 people. The Mijaks practise predominantly animal husbandry, and are known for their ecclesiastical architecture, woodworking, iconography, and other rich traditions, as well as their characteristic Galičnik dialect of the Macedonian language. 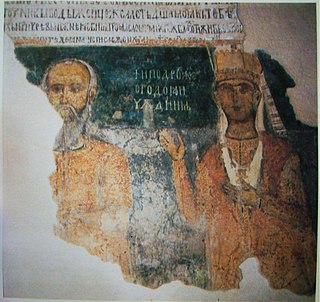 Dejan was a Serbian magnate who served Emperor Stefan Dušan as sevastokrator, and Emperor Uroš V as despot. He was married to Emperor Dušan's sister Teodora, and possessed a large province in the Kumanovo region, east of Skopska Crna Gora. It initially included the old župe (counties) of Žegligovo and Preševo. Uroš V later gave Dejan the Upper Struma river with Velbužd (Kyustendil). Dejan built the Zemen Monastery, among others, and reconstructed several church buildings throughout his province.

Baldovin was a Serbian knez (duke) and kaznac that served King Stefan Uroš III. He held the province around Vranje.

Ivan Ivanić was a Serbian diplomat of the Kingdom of Serbia and author of numerous ethnographical works about Serbia and the Balkans. He also wrote travel literature about the region of Old Serbia.

Doksim Mihailović was a Macedonian Serb voivode, originally a teacher, who joined the Serbian Chetnik Organization to fight in Ottoman Macedonia, and then the Balkan Wars. Originally a teacher, he fought against the Ottomans army and later Bulgarian guerrilla bands in the Kosovo Vilayet.

Antonije Znorić was a military officer (colonel) of the Habsburg army and the commander of the Serbian Militia during the Great Turkish War.

Old Rashko or Old man Raško was a Serbian storyteller and gusle player (guslar) known as one of the most important sources of the epic poetry recorded by Vuk Karadžić.

Society against Serbs was a Bulgarian anti-Serb organization established in 1897 in Thessaloniki, Ottoman Empire, by Dame Gruev, a member of the Internal Macedonian Revolutionary Organization (IMRO). It had the purpose of assassinating influential Serbs in Ottoman Macedonia, consequently maintaining Bulgarian propaganda in the region.

Savatije Milošević, known as Vojvoda Savatije, was a Serbian hajduk and Chetnik commander.

Grdan was the vojvoda (duke) of the Nikšić nahija, part of the Sanjak of Herzegovina, who led several uprisings against the Ottomans in between 1596 and 1612, alongside Serbian Patriarch Jovan Kantul.

Damjan Ljubibratić, known as Damjan the Serb was a Serbian Orthodox monk and diplomat, the secretary of Patriarch Jovan Kantul. 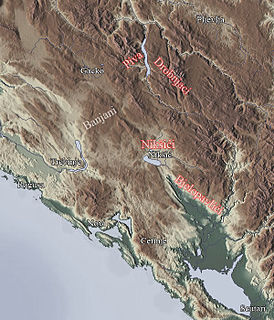 The Serb uprising of 1596–1597, also known as the Herzegovina uprising of 1596–1597, was a rebellion organized by Serbian Patriarch Jovan Kantul and led by Grdan, the vojvoda ("duke") of Nikšić against the Ottomans in the Sanjak of Herzegovina and Montenegro Vilayet, during the Long Turkish War (1593–1606). The uprising broke out in the aftermath of the failed Banat Uprising in 1594 and the burning of Saint Sava's relics on April 27, 1595; it included the tribes of Bjelopavlići, Drobnjaci, Nikšić, and Piva. The rebels, defeated at the field of Gacko in 1597, were forced to capitulate due to a lack of foreign support.

Visarion was the Metropolitan of Herzegovina between 1590 and 1602.

The Serb Uprising of 1737–39 broke out following Austria's defeats against the Ottomans, when the Austrian Emperor issued proclamations that the Christians in the Balkans rise against the Ottoman Empire. The Austrian Emperor called on the Serbs, who were ready to revolt, on 15 June 1737, and stressed that they would fight in an alliance with Russia against a common enemy. The Serbs organized themselves under Serbian Patriarch Arsenije IV. The uprising had a wide geographical extent, from Belgrade to eastern Bosnia and Herzegovina, Montenegro and the Šar Mountain. The Albanian Klimenti tribe also joined the uprising. The failed war prompted Serbs, mostly from Herzegovina, Sandžak, Metohija and Montenegro, to flee under the leadership of Arsenije IV from the Ottoman territories into the Habsburg Monarchy.