Toma Zdravkov (Bulgarian : Тома Здравков) (born 24 May 1987 in Pazardzhik, Bulgaria) is a Bulgarian singer, most known for winning Music Idol, the Bulgarian version of the British hit show Pop Idol.

His career began in 2008 when he won the Music Idol song contest; [2] he was the first rock singer to win it. Later this year, he released his first album, Geroi (Hero; Bulgarian : Герой), and his first single, also called "Geroi" (a cover of Thornley's "So Far So Good"). On 4 July 2008, he opened for Def Leppard and Whitesnake. [1]

Zdravko Stoyanov Zdravkov is a former Bulgarian football goalkeeper. He ended his career at the end of 2006–07 season.

Stanislav Todorov Trifonov, known as Slavi Trifonov, is a Bulgarian musician and actor. Trifonov is mainly active in the folk music genres, but he has experimented with other genres such as hip-hop in collaboration with the Australian-based producer Yasen Subev, and pop-rock and punk as a part of Ku-Ku Band. His name is associated mainly with the Slavi's Show, Exiles, Canaletto and KU-KU. 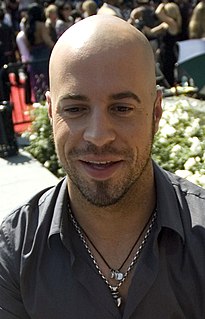 Christopher Adam Daughtry is an American singer, songwriter and actor. He is the lead vocalist and rhythm guitarist for the rock band Daughtry, which he formed after placing fourth on the fifth season of American Idol. Released by RCA Records, Daughtry's self-titled debut album became the fastest selling debut rock album in Nielsen SoundScan history, selling more than one million copies after five weeks of release. The album was recorded before the band was officially formed, making him the only official member present on the album.

Music Idol was the Bulgarian version of the British television hit show Pop Idol. It was a talent contest to determine the superior pop performer. Its first season was aired on bTV from February 26 until June 7, 2007. During its third season, the show went international and auditions took place in neighboring Macedonia. Other major changes in the third season: minimum age for participants 13, more talk show than music, great accent on the hosts, hidden vote results, which makes it impossible to validate the result of each elimination. 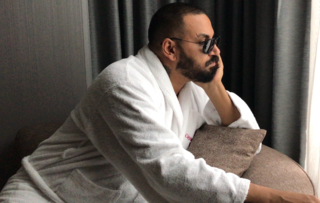 Vasil Troyanov Boyanov, professionally known as Azis (Азис), is a Bulgarian recording artist, of Roma ethnicity. Azis initially rose to prominence in Eastern Europe performing songs mostly in chalga, a genre which can be described as the Bulgarian rendition of pop-folk. Azis has collaborated with other Bulgarian pop-folk singers, such as Gloria, Malina, Sofi Marinova, Toni Storaro, and with Bulgarian rap artists – Ustata and Vanko 1. Other than that, his repertoire includes duets with Serbian singers, including Indira Radić, Marta Savić and Jelena Karleuša.

Radoslav Metodiev Zdravkov is a Bulgarian retired footballer who played as an attacking midfielder, and most recently manager of Lokomotiv Sofia.

Deep Zone Project is a Bulgarian house/electro band formed in 2000 by DJ Dian Solo, JuraTone and Rossko. Eventually Rosko was replaced by Startrax. Deep Zone are most famous for their collaboration with DJ Balthazar, when they represented Bulgaria at the Eurovision Song Contest 2008 with the song "DJ, Take Me Away". The band has released five albums and has had a number of successful singles on the Bulgarian charts and has won many national and international awards. Their vocalist until early 2011 was Joanna Dragneva; after leaving for a solo career, she was replaced by Nadia.

Maria Ilieva is a Bulgarian singer and a producer. Ilieva was a judge on the first, second and third seasons of X factor (Bulgaria).

Miroslav Kostadinov is a Bulgarian singer and songwriter who represented Bulgaria in the Eurovision Song Contest 2010 with the song "Angel si ti".

Football Club Slivnishki Geroy are a Bulgarian association football club based in Slivnitsa, Sofia Province, currently playing in the South-West Third League. Their home ground since 1966 has been Slivnishki Geroi Stadium. The team has played in blue and white stripes throughout most of its history.

David Jamahl Listenbee, better known by his stage name GoonRock, is an American record producer, musician, singer, songwriter and rapper. Raised in Los Angeles, California, early in his career he focused on hip hop and sold beats to artists such as Dr. Dre, Ne-Yo, Kanye West, and Juvenile. He later began incorporating club music. GoonRock co-wrote and co-produced a number of songs on LMFAO's 2011 album Sorry for Party Rocking, including hit singles "Party Rock Anthem" and "Sexy and I Know It."

Deyan Nedelchev is a Bulgarian pop singer, showman and composer. He has issued 12 albums and 9 maxi singles, including projects with his colleagues, some with his brother Boyko. He won the Grand-prix at the Golden Orpheus international festival in 1993 at the contest for new Bulgarian pop songs with the song 'Dedication'. Deyan is the only Bulgarian singer to record an album with Polygram, with whom he had a 3-year contract based in Johannesburg, South Africa.He has released his last two albums in Japan with a company Orphictone

Svetlana Ilieva Bliznakova, born on November 11, 1983 is a Bulgarian singer, musician and songwriter. She started solo music career in 2005 and since 2010 she fronts the Bulgarian rock band Sevi.

SEVI are a Bulgarian rock band from Sofia. The current members are Svetlana "Sevi" Bliznakova, Delyan Ketipov, Rally Velinov and Pavlin Ivanov. The band describe their music genre as heart rock,[1] a name given to their style due to the emotional, heartfelt content and message of their songs.

Fikret Tuncher Fikret is a Bulgarian pop-folk singer of Turkish descent. He is the son of singer Toni Storaro.