Toman (also known as Zdeněk Toman) is a 2018 Czech Historical film by Ondřej Trojan. It focuses on Zdeněk Toman, who led Czechoslovak intelligence from 1945 to 1948. [5] It premiered at Slavonice Film Festival on 2 August 2018. [6]

The film follows the rise and fall of Zdeněk Toman, Head of Czechoslovak Intelligence from 1945 to 1948.

The film starts in April 1948 when Toman is interrogated by Inspector Putna. The film then moves to March 1945 when Toman was repatriation officer in Carpathian Ruthenia. He comes into conflict with NKVD officers who insist that nobody will be repatriated from Carpathian Ruthenia as it will become part of Soviet Union. Toman bribes NKVD officers and later meets Imrich Rosenberg. Rosenberg asks Toman to help repatriate Jews from Carpathian Ruthenia. Toman agrees to help for money. Toman later organises a meeting of the exiled Czechoslovak government in Košice. He meets Václav Nosek, who agrees to help him with his career. Nosek helps Toman to become part of Czechoslovak Intelligence, which is led by non-communist General Josef Bartík. Toman befriends a prominent Communist Rudolf Slánský, who tasks Toman to get finances for the Communist Party of Czechoslovakia. Toman uses his contacts in Great Britain to get the finances and also rises in prominence. He replaces Bartík as the Head of Intelligence. He also uses his influence to help Jewish refugees and to help establish Israel. Toman's finances help Communists to win 1946 election. He meets Klement Gottwald but also becomes an enemy of the Communist Clique represented by Bedřich Reicin, which has ties in the Soviet Union. Toman's support for Israel gets him into conflict with the Soviets. Toman is removed from his position during the 1948 coup d'état. Toman is arrested while his wife commits suicide. Toman manages to escape, and with the help of Jewish representatives he previously helped, he escapes to Bavaria where he surrenders to American soldiers. [7]

Zdeňka Šimandlová received request for screenplay about Zdeněk Toman. She worked on it for 4 years even after the request was taken back. Šimandlová approached Ondřej Trojan with the screenplay in 2010. Trojan became fascinated by the character of Zdeněk Trojn and agreed to make film according to the screenplay. [9] The screenplay was severely modified to make it more historically accurate. [10] [2] Martin Šmok was invited to the production as a history advise to assure historical accuracy of the film. [11]

Trojan started to gather finances for the film. He planned to start filming in 2014 but negotiations with Czech Television took longer than expected. Trojan decided to start when the film had 70% of finances ensured. [12] [10]

Filming started on 4 April 2017. It took place in Brdy and later moved to Prague. [13] Some parts were filmed at Barrandov Studios. [14] Shooting finished on 30 October 2017. Director and producer Ondřej Trojan announced that the film is expected to have difficult post-production. [1]

Premiere was scheduled for 12 April 2018 but had to be moved to 4 October 2018 as a result of problematic post-production. [15] The film eventually had a limited premiere for accredited audience at Slavonice Film Festival. It was distributed for Cinema on 4 October 2018. [2] [16]

The film premiered at Slavonice Film Festival. It received positive reactions and a long ovation from audience. [2] František Fuka published his review on 26 September 2018. He was writing of the film but praised final part of the film. [17] Mirka Spáčilová called Toman a talking Enciclopedia. [18] The film received overall mixed to positive reviews from critics as it holds 66% at Kinobox.cz. [19] The film was nominated for 13 Czech Lion Awards. [20] 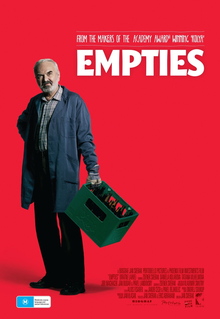 Empties is a 2007 film directed by Jan Svěrák and written by his father Zdeněk Svěrák, who also stars in the film. It was released first in the Czech Republic in March 2007. The film is a comedy from the same team which made Kolya.

Kooky is a 2010 Czech action comedy film directed by Jan Svěrák. The film combines techniques of puppet animation, stop motion and live action. It tells the story of a six-year-old asthmatic boy whose parents throw his favorite toy away, an old teddy bear named Kooky. The boy, however, secretly sneaks out of the house at night, to retrieve Kooky from the garbage can and bring him back home. Due to that, the boy gets ill. In his feverish dreams, Kooky comes to life in the landfill, escapes into a mysterious forest and begins its journey amongst the rough-and-ready creatures of the forest.

Walking Too Fast is a Czech Thriller and drama film directed by Radim Špaček. It was released in 2010. It is a psychological story about relations between secret police (StB) and dissident movement, set in communist Czechoslovakia in the 1980s. The film was likened to the German film The Lives of Others.

Četnické humoresky is a Czech crime television series about a police station in the city of Brno. The story is set in the period of the pre-war First Czechoslovak Republic and combines elements of crime drama and comedy. The stories are based on real case files from that era.

Tank Brigade is a 1955 Czechoslovak film made about the World War II Eastern Front conflict between German and Czechoslovak forces. The film is set in 1944 and follows Czechoslovak tank brigade during Battle of Ostrava.

Příběh kmotra is a Czech thriller film made in 2013. It was directed by Petr Nikolaev. It is based on story of Czech Mobster František Mrázek.

A Prominent Patient is a 2016 Czech-Slovak drama film directed by Julius Ševčík. It was screened in the Berlinale Special section at the 67th Berlin International Film Festival. It won twelve Czech Lions including the Czech Lion for Best Film. The film was first screened in Lucerna Kino.

Spravedlnost is Czech crime television series. It tells story of police investigator Richard who investigates murder of prominent judge that was committed by his daughter Lily. The first episode premiered on 12 March 2017. It was directed by Peter Bebjak. Vetchý who starrs in the series collaborated with Bebjak on Případy 1. oddělení.

Medieval is an upcoming Czech action historical drama film by Petr Jákl. It is about the life of Jan Žižka, a Bohemian military commander who never lost a battle. The film is set prior to the Hussite Wars (1419-1434), when Žižka was young. It tells the story of how Žižka became a famous military commander. It is the most expensive Czech film ever made.

Dukla 61 is a 2018 Czech disaster film directed by David Ondříček. The film is set in 1961 when a mining disaster at Dukla Mine in Dolní Suchá killed 108 miners. The film focuses on a family of a man who works at the mine along with his son. The film premiered at Finále Plzeň Film Festival. The first part was broadcast on 27 May 2018. It was viewed by 952,000 people. The second part was broadcast on 3 June 2018 and was viewed by 1,130,000 people. 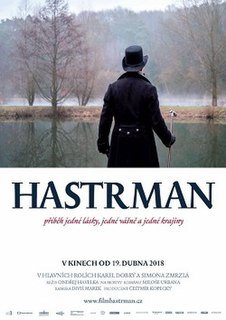 Jan Palach is a Czech biographical film directed by Robert Sedláček. The film follows Jan Palach during 1968 and 1969 and shows final 6 months of his life. The film premiered at Uherské Hradiště Summer Film School.

On the Roof is a 2019 Czech comedy-drama film. It stars Alois Švehlík who replaced Jan Tříska. Tříska died before shooting started so he had to be recast.

Bontonfilm is a Czech film company. It was founded in 1994 by transformation from Lucernafilm Video.

Zátopek is an upcoming Czech biographical film about Emil Zátopek. It is directed by David Ondříček and stars Václav Neužil.

Charlatan is a 2020 Czech biographical drama directed by Agnieszka Holland. It is about the healer Jan Mikolášek (1889-1973), who cured hundreds of people using plant-based remedies. It was selected as the Czech entry for the Best International Feature Film at the 93rd Academy Awards. 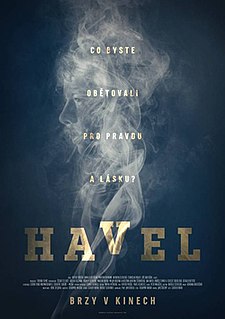 Havel is a 2020 Czech historical film based on the life of dissident and former Czech president Václav Havel. It is directed by Slávek Horák and stars Viktor Dvořák. The film focuses on Havel's life from 1968 to 1989 when he was a dissident under the Communist regime and relationship with his wife Olga and friend Pavel Landovský.