Tomas Albrektsson (born August 25, 1945) is a Swedish physician who trained under Per-Ingvar Brånemark and is noteworthy for having contributed significantly to the field of implant dentistry.

Albrektsson received his medical degree in 1973 and his doctorate in 1979, publishing his thesis on the healing of bone graft, having worked under Brånemark. [1]

A cardiac pacemaker, is a medical device that generates electrical impulses delivered by electrodes to cause the heart muscle chambers to contract and therefore pump blood; by doing so this device replaces and/or regulates the function of the electrical conduction system of the heart. 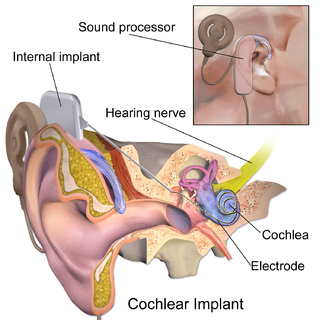 A cochlear implant (CI) is a surgically implanted neuroprosthetic device to provide a person with moderate to profound sensorineural hearing loss a modified sense of sound. CI bypasses the normal acoustic hearing process to replace it with electric signals which directly stimulate the auditory nerve. A person with a cochlear implant receiving intensive auditory training may learn to interpret those signals as sound and speech. However, one third of deaf children do not develop language if they are on a CI program alone and have no sign language input. 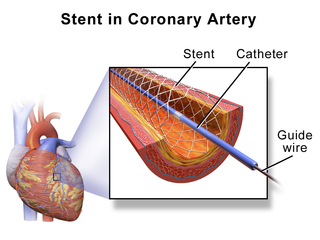 In medicine, a stent is a metal or plastic tube inserted into the lumen of an anatomic vessel or duct to keep the passageway open, and stenting is the placement of a stent. There is a wide variety of stents used for different purposes, from expandable coronary, vascular and biliary stents, to simple plastic stents used to allow the flow of urine between kidney and bladder. "Stent" is also used as a verb to describe the placement of such a device, particularly when a disease such as atherosclerosis has pathologically narrowed a structure such as an artery. 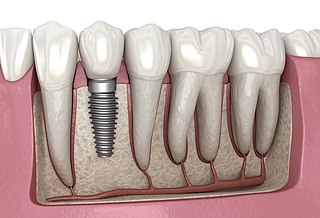 Osseointegration is the direct structural and functional connection between living bone and the surface of a load-bearing artificial implant. A more recent definition defines osseointegration as "functional ankylosis ", where new bone is laid down directly on the implant surface and the implant exhibits mechanical stability. Osseointegration has enhanced the science of medical bone and joint replacement techniques as well as dental implants and improving prosthetics for amputees.

Nobel Biocare is a company that manufactures dental implants and CAD/CAM-based individualized prosthetics and is headquartered in Kloten, Switzerland near the Zürich Airport. Nobel Biocare in its current form was founded in 2002. It originates in a partnership formed in 1978 between Swedish medical researcher Professor Per-Ingvar Brånemark and Bofors, a Swedish company, to industrialize Brånemark's discovery of osseointegration.

Frank Gustave Zarb is an American businessman and former Republican politician. He is perhaps best known as the chairman and ceo of the NASDAQ stock exchange during the dot-com boom of the late 1990s. He is also known for his role as the "Energy Czar" under President Gerald Ford during the 1970s energy crisis.

Per-Ingvar Brånemark was a Swedish physician and research professor, touted as the "father of modern dental implantology". The Brånemark Osseointegration Center (BOC), named after its founder, was founded in 1989 in Gothenburg, Sweden.

A barrier membrane is a device used in oral surgery and periodontal surgery to prevent epithelium, which regenerates relatively quickly, from growing into an area in which another, more slowly growing tissue type, such as bone, is desired. Such a method of preventing epithelial migration into a specific area is known as guided tissue regeneration (GTR).

An intrauterine device (IUD), also known as intrauterine contraceptive device or coil, is a small, often T-shaped birth control device that is inserted into the uterus to prevent pregnancy. IUDs are one form of long-acting reversible birth control (LARC). One study found that female family planning providers choose LARC methods more often (41.7%) than the general public (12.1%). Among birth control methods, IUDs, along with other contraceptive implants, result in the greatest satisfaction among users.

William Selvamurthy is presently working with Amity University as President of Amity Science, Technology and Innovation Foundation and Director General for Amity Directorate of Science and Innovation. Selvamurthy is a Distinguished Scientist and served as a Chief Controller, Research & Development at Defence Research and Development Organisation, Government of India. He is a post-graduate in Human Physiology from Christian Medical College, Vellor (1972) and PhD from University of Delhi (1982) and Doctorate of Science (DSc) from Swami Vivekananda Yoga Anusandhana Samsthana, Bangalore (2006). He has been awarded the Degree of Doctorate of Science (DSc) in recognition of his eminent attainment in the field of science and his distinctive place in the scientific world by Fakir Mohan University, Balasore (2008). He has also been awarded Doctor of Science (DSc) from Fakir Mohan University, Balasore (2008), Bharathiar University, Coimbatore (2009), Amity University (2011) and Karunya University (2011). He is spearheading the research and development activities for the health and wellbeing of the armed forces. 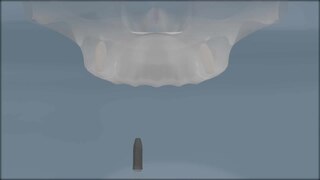 The term All-on-4 refers to "all" teeth being supported "on four" dental implants, a surgical and technique prosthodontics procedure for total rehabilitation of the edentulous patient or for patients with badly broken down teeth, decayed teeth or compromised teeth due to gum disease. It consists of the rehabilitation of either edentulous or dentate maxilla and/or mandible with fixed prosthesis by placing four implants in the anterior maxilla, where bone density is higher. The four implants support a fixed prosthesis with 10 to 14 teeth and it is placed immediately, typically within 24 hours of surgery.

Implant failure refers to the failure of any medical implant to meet the claims of its manufacturer or the health care provider involved in its installation. Implant failure can have any number of causes. The rates of failure vary for different implants.

Cochlear Bone Anchored Solutions is a company based in Gothenburg, Sweden, that manufactures and distributes bone conduction hearing solutions under the trademark Baha. The company was created in 1999 and was then called Entific Medical Systems. When Cochlear bought the company in 2005, the name changed to Cochlear Bone Anchored Solutions. The acronym "BAHA" was trademarked into Baha, since it is not considered a hearing aid by insurance companies.

Bicon Dental Implants is a privately owned company located in Boston, MA. The company specializes in short dental implants that use a locking taper or cold welding connection to secure the abutment to the implant. Bicon is notable and worthy of mention for the following three reasons: First, Bicon implants are extremely short in length. The size of Bicon implants allow them to be placed in regions that are crowded with natural teeth and/or implants, or in regions that would otherwise require bone grafting. Second, the implants do not have the screw-form design typical of other available implants. Third, the abutments are connected to the implant via a locking taper. This is notable from both a medical and engineering standpoint as no other implant company offers an implant with a biological seal at the implant/abutment interface; almost all other implants possess an internal screw to connect their abutments.

Zygoma implants are different from conventional dental implants in that they anchor in to the zygomatic bone rather than the maxilla. They may be used when maxillary bone quality or quantity is inadequate for the placement of regular dental implants. Inadequate maxillary bone volume may be due to bone resorption as well as to pneumatization of the maxillary sinus or to a combination of both. The minimal bone height for a standard implant placement in the posterior region of the upper jaw should be about 10 mm to ensure acceptable implant survival. When there is inadequate bone available, bone grafting procedures and sinus lift procedures may be carried out to increase the volume of bone. Bone grafting procedures in the jaws have the disadvantage of prolonged treatment time, restriction of denture wear, morbidity of the donor surgical site and graft rejection.

The history of dental treatments dates back to thousands of years. The scope of this article is limited to the pre-1981 history.