Tomas Chamorro-Premuzic ( /tʃæˈmɒroʊˈprɛmʊzɪk/ [1] ) is an organizational psychologist who works mostly in the areas of personality profiling, people analytics, talent identification, the interface between human and artificial intelligence, and leadership development. He is currently a professor of business psychology at University College London (UCL) and Columbia University, as well as the Chief Talent Scientist at ManpowerGroup, and was previously the CEO at Hogan Assessment Systems.

Chamorro-Premuzic is one of the founders of Meta, a company that creates data-driven tools to help corporations identify employees and leaders with entrepreneurial talent. [2] [3] He also serves as a consultant for both the private and public sectors, with clients that have included JP Morgan, Goldman Sachs, HSBC, Prudential, Unilever, the British Army, the BBC, Twitter, Spotify, and Harvard’s Entrepreneurial Finance Lab. [4] He is the director of the MSc in Industrial-Organizational and Business Psychology at the University College London (UCL), having previously founded the MSc in Occupational Psychology at Goldsmiths, University of London. [5] [6] [7] He has also previously taught at the London School of Economics and New York University. [8] He is the author of the column Mr. Personality, which appears regularly on Psychology Today , and contributes regularly to the Guardian, Fast Company, Management Today, Forbes, and Harvard Business Review . [9] [10] In February 2015, Chamorro-Premuzic assumed the role of CEO at Hogan Assessments after spending two years as the company's vice president of research and innovation. The company provides personality assessment services that corporations can utilize for hiring and training purposes.

Chamorro-Premuzic was awarded with the Early Career Development Award from The International Society for the Study of Individual Differences in 2009. [11] He also received the Daniel E. Berlyne Award for Outstanding Research by a Junior Scholar at the 2010 American Psychological Association Awards. [12] He was selected by Workforce Management as a 2013 Game Changer, an award that recognizes human resources’ innovative rising stars under 40 for their positive impact on the past, present and future of the HR industry. [13] In 2015 he was awarded the Raymond Katzell award for bringing Industrial-Psychology science to the wider public. In 2017 he was elected Fellow to the Society of Industrial and Organizational Psychology (SIOP). He has made multiple media appearances on BBC, CNN, and Sky News, and has appeared on Live from Studio Five and on Big Brother . [14] [15] [16] He serves on the board of directors for The International Society for the Study of Individual Differences (ISSID). [17] He has also served on the editorial board of the APA Division 10 Journal of the Psychology of Aesthetics, Creativity, and the Arts. [18]

Chamorro-Premuzic is the author or co-author of 10 books dealing with psychology and how it relates to individual personality and the workforce. [19] He has also published over 150 scientific articles in peer-reviewed journals. [20]

Emotional intelligence (EI), emotional leadership (EL), emotional quotient (EQ) and emotional intelligence quotient (EIQ), is the capability of individuals to recognize their own emotions and those of others, discern between different feelings and label them appropriately, use emotional information to guide thinking and behavior, and manage and/or adjust emotions to adapt to environments or achieve one's goal(s). Although the term first appeared in 1964, it gained popularity in the 1995 book Emotional Intelligence, written by the science journalist Daniel Goleman.

General knowledge is information that has been accumulated over time through various mediums. It excludes specialized learning that can only be obtained with extensive training and information confined to a single medium. General knowledge is an essential component of crystallized intelligence. It is strongly associated with general intelligence and with openness to experience.

William Roger Revelle is a psychology professor at Northwestern University working in personality psychology. Revelle studies the biological basis of personality and motivation, psychometric theory, the structure of daily mood, and models of attention and memory.

Openness to experience is one of the domains which are used to describe human personality in the Five Factor Model. Openness involves six facets, or dimensions, including active imagination (fantasy), aesthetic sensitivity, attentiveness to inner feelings, preference for variety, and intellectual curiosity. A great deal of psychometric research has demonstrated that these facets or qualities are significantly correlated. Thus, openness can be viewed as a global personality trait consisting of a set of specific traits, habits, and tendencies that cluster together. 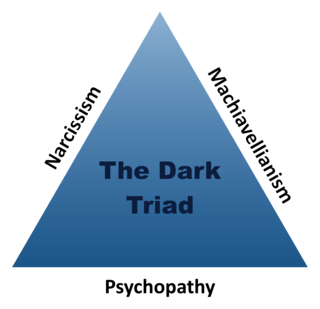 In psychology, the dark triad comprises the personality traits of narcissism, Machiavellianism, and psychopathy. They are called "dark" because of their malevolent qualities.

Typical intellectual engagement (TIE) is a personality construct referring to a person's enjoyment of intellectually demanding activities. TIE was developed to identify aspects of personality most closely related to intelligence and knowledge and measures a person's typical performance in intellectual domains rather than their maximal performance. TIE is moderately positively associated with crystallized intelligence, and with general knowledge, and predicts academic performance. TIE is hard to distinguish from the earlier construct need for cognition and is positively correlated with openness to experience.

The psychology of music preference refers to the psychological factors behind peoples' different music preferences. Music is heard by people daily in many parts of the world, and affects people in various ways from emotion regulation to cognitive development, along with providing a means for self-expression. Music training has been shown to help improve intellectual development and ability, though no connection has been found as to how it affects emotion regulation. Numerous studies have been conducted to show that individual personality can have an effect on music preference, mostly using personality, though a recent meta-analysis has shown that personality in itself explains little variance in music preferences. These studies are not limited to American culture, as they have been conducted with significant results in countries all over the world, including Japan, Germany, and Spain.

Narcissism in the workplace can become an issue that may have a major impact on an entire organization. Often beginning with manipulation during the interview process, to engaging in counterproductive work behavior. Narcissism is both a personality trait and a personality disorder, generally assessed with the Narcissistic Personality Inventory. Owing to these differences from typical workplace behaviors, Psychologists have studied the interview strategies of narcissists, their impact on coworkers, correlated behaviors, motivations, and preferences. Following these investigations, many have offered insight into the best practices when working with a narcissist, and perhaps some amount of benefit stemming from some of their behaviors.

Differences in human intelligence have long been a topic of debate among researchers and scholars. With the advent of the concept of g factor or general intelligence, many researchers have argued that there are no significant sex differences in general intelligence, although ability in particular types of intelligence does appear to vary. While some test batteries show slightly greater intelligence in males, others show greater intelligence in females. In particular, studies have shown female subjects performing better on tasks related to verbal ability, and males performing better on tasks related to rotation of objects in space, often categorized as spatial ability.

Frank H. Farley is a humanistic psychologist and a past president of the American Psychological Association (APA) and the American Educational Research Association (AERA). He teaches at Temple University and has been a fellow or a leader of several scholarly societies. He has published research on a wide range of topics, from risk-taking personalities to men who visit massage parlors.

Machiavellianism in the workplace is a concept studied by many organizational psychologists. Conceptualized originally by Richard Christie and Florence Geis, Machiavellianism refers to a psychological trait concept where individuals behave in a cold and duplicitous manner. It has in recent times been adapted and applied to the context of the workplace and organizations by many writers and academics.

Intelligence and personality have some common features; for example, they both follow a relatively stable pattern throughout the whole of one’s life, which is genetically determined in different degrees. In addition, they are both significant predictors of various outcomes, such as educational achievement, occupational performance, and health. However, the traditional view in psychology is that there is no meaningful relationship between personality and intelligence and they should be studied as separate entities.

The UCL Division of Psychology and Language Sciences is a Division within the Faculty of Brain Sciences of University College London (UCL) and is located in London, United Kingdom. The Division offers teaching and training and undertakes research in psychology and communication and allied clinical and basic science. It is the largest university psychology department in England.

A self-test of intelligence is a psychological test that someone can take to measure one's own intelligence.

Konstantinos Vassilis Petrides is Professor of Psychology and Psychometrics at University College London and the founding director of the London Psychometric Laboratory. He is the Secretary-Treasurer of the International Society for the Study of Individual Differences and Senior Associate Editor for the journal Personality and Individual Differences. His work has been published in various scientific journals, encyclopedias, and has been covered in major media outlets.

In the field of personality psychology, Machiavellianism is a personality trait centered on manipulativeness, callousness, and indifference to morality. Though unrelated to the historical figure or his works, the trait is named after the political philosophy of Niccolò Machiavelli, as psychologists Richard Christie and Florence Geis used edited and truncated statements inspired by his works to study variations in human behaviors. Their Mach IV test, a 20-question, Likert-scale personality survey, became the standard self-assessment tool and scale of the Machiavellianism construct. Those who score high on the scale are more likely to have a high level of deceitfulness and a unempathetic temperament.