Tomas Kaukėnas (born 1 May 1990) is a Lithuanian biathlete. He competes at the Biathlon World Cup. Kaukėnas best result in the World Championships is 22nd place in sprint event in 2013. [2]

In 2014 Kaukėnas was selected to represent Lithuania in 2014 Winter Olympic Games. [3]

All results are sourced from the International Biathlon Union.

*During Olympic seasons competitions are only held for those events not included in the Olympic program.
**The single mixed relay was added as an event in 2019.

Ilmārs Bricis is a former Latvian biathlete, who has participated in six Winter Olympics from 1992 to 2010.

Rimantas "Rimas" Kaukėnas is a Lithuanian former professional basketball player. His long career has taken him to a number of countries, finding the most success in Italy. He has also been a member of the senior men's Lithuanian national team. Playing primarily at the shooting guard position, he can also play as a point guard.

Kaisa-Leena Mäkäräinen is a Finnish former world-champion and 3-time world-cup-winning biathlete, who currently competes for Kontiolahden Urheilijat. Outside sports, Mäkäräinen is currently studying to be a Physics teacher at the University of Eastern Finland in Joensuu. Her team coach is Jonne Kähkönen, while Jarmo Punkkinen is her ski coach. 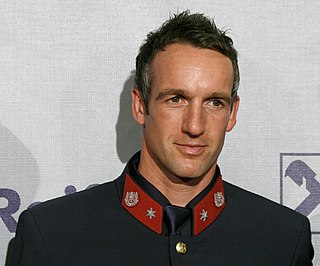 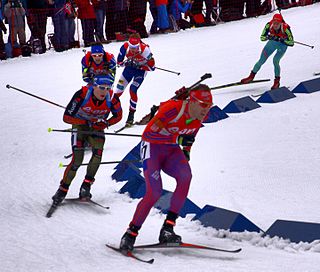 Lowell Bailey is an American biathlon coach and retired biathlete who competed from 2001 until 2018. 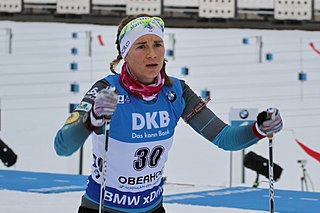 Anaïs Bescond is a French biathlete and non-commissioned officer. 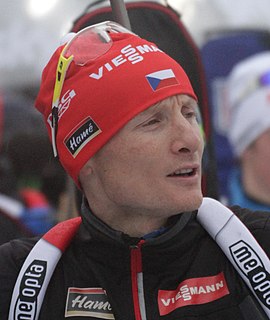 Ondřej Moravec is a Czech biathlete. 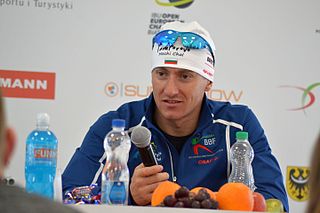 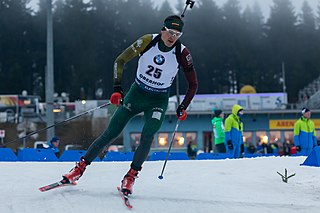 Vytautas Strolia is a Lithuanian cross-country skier and biathlete.

Franziska Preuß is a German biathlete. Preuß started in her first world cup races in the 2013/14-season after winning two medals at the last European Championships, three medals at the Junior World Championships and 3 gold medals at the 2012 Winter Youth Olympics. In 2014, she is going to participate in the Winter Olympics in Sochi. She was officially nominated by the DOSB on 23 January 2014.

Gabrielė Leščinskaitė is a Lithuanian biathlete. She represented Lithuania at the Junior World championships in 2012, 2013, 2014 and 2015, and at the Biathlon World Championships 2015 in Kontiolahti.

Biathlon at the 2018 Winter Olympics was held at the Alpensia Biathlon Centre, Daegwallyeong-myeon, Pyeongchang-gun, Gangwon-do, South Korea. There were eleven events contested: men and women competed in each of sprint, pursuit, individual, mass start, and relay; there was also a mixed relay event. The eleven events were scheduled to take place between 9 and 23 February 2018.

Lithuania competed at the 2018 Winter Olympics in Pyeongchang, South Korea, from 9 to 25 February 2018, with five competitors in three sports.

Karol Dombrovski is a Lithuanian biathlete that competes at the Biathlon World Cup..