Tomas Mazetti (born 1972), is a Swedish activist and inventor. He is the founder of the former creative agency Studio Total as well as the invention lab Nordic Society for Invention and Discovery and Wheelys Café. [1] [2] [3] He is, among other things, known for the Teddybear Airdrop Minsk 2012 where he flew over Belarus airspace, parachuting teddy bears with democratic messages. [4] [5]

Studio Total was a Swedish marketing and advertising agency in Stockholm and Malmö. They focused primarily on creative PR, such as guerrilla marketing, and have attracted much attention for several campaigns, both locally and globally. Their first assignment was for Riksteatern, for which the fictional political party "Kulturpartiet" became one of the most successful Swedish PR-campaigns in 2005. On the political theme, Studio Total also stirred up controversy in 2010, when Swedish feminist Gudrun Schyman burned 100,000 kronor in a protest against unequal pay. In 2012 Studio Total won a gold epica for worlds best PR.

Nordic Society for Invention and Discovery is a Scandinavian invention lab, founded in 2013 by Per Cromwell and Tomas Mazetti.

Teddybear Airdrop Minsk 2012 was an aerial event that took place over Belarus on July 4, 2012. An airplane, chartered by the Swedish advertising agency Studio Total, illegally entered the Belarusian airspace on July 4 and parachuted several hundred teddy bears with notes carrying pro-democracy messages. After denying for three weeks that the incident ever took place and calling the footage of the airdrop released by Studio Total a hoax, the Belarus government finally acknowledged on July 26, 2012, that the teddy bear airdrop did happen. 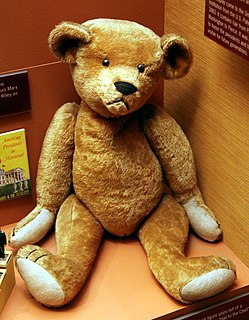 A teddy bear is a soft toy in the form of a bear. Developed apparently simultaneously by toymakers Morris Michtom in the U.S. and Richard Steiff in Germany in the early years of the 20th century, and named after President Theodore "Teddy" Roosevelt, the teddy bear became an iconic children's toy, celebrated in story, song, and film. Since the creation of the first teddy bears which sought to imitate the form of real bear cubs, "teddies" have greatly varied in form, style, color, and material. They have become collector's items, with older and rarer "teddies" appearing at public auctions. Teddy bears are among the most popular gifts for children and are often given to adults to signify love, congratulations, or sympathy.

Blindside is the debut studio album by Swedish Christian rock band Blindside, released on Solid State Records in 1997. It was re-released by DRT Entertainment on May 10, 2005 with four unreleased demo tracks. Teddy Ruxpin is an animatronic children's toy in the form of a talking bear. The bear's mouth and eyes moved while "reading" stories that were played on an audio tape cassette deck built into its back. It was created by Ken Forsse with later assistance by Larry Larsen and John Davies, and the first version of the toy was designed by the firm RKS Design. Later versions would use a digital cartridge in place of a cassette. At the peak of his popularity, Teddy Ruxpin became the best-selling toy of 1985 and 1986, and the 2006 version was awarded the 2006 Animated Interactive Plush Toy of the Year by Creative Child Magazine. A cartoon based on the characters debuted in 1986. 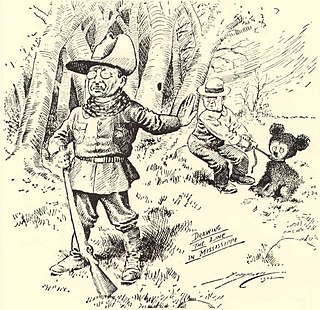 Morris Michtom, was a Russian-born businessman and inventor, who with his wife Rose, invented the teddy bear in 1902. They founded the Ideal Novelty and Toy Company, which after Michtom's death became the largest doll-making company in the United States.

The teddy bear toss is a popular Christmas season promotion most common at ice hockey games. Fans are encouraged to bring teddy bears or other stuffed toys to the game, and to throw them onto the ice when the home team scores its first goal. The toys are gathered up to be donated as presents to hospitals and charities. In many cases, the players themselves personally donate some of the bears to children at area hospitals. The Hershey Bears claim a world record of 34,798 stuffed toys in a single game. 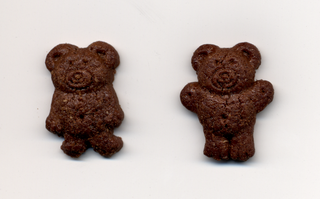 Teddy Grahams are bear shaped graham cracker snacks created by Nabisco. Introduced in 1988, Teddy Grahams come in two distinct shapes: bears with arms up and legs closed, and bears with legs open and arms down. When first introduced, Teddy Grahams were available in honey, cinnamon, fruit punch, and chocolate flavors. A chocolate chip, birthday cake and recently discontinued oatmeal variety have since been introduced as a cereal. 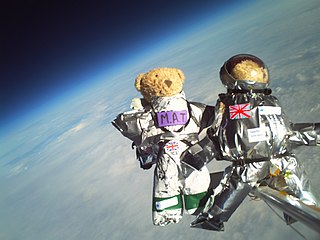 Teddy bear parachuting, sometimes referred to as parafauna, is a game in which teddy bears equipped with parachutes are dropped from a height. It is increasing in popularity as a charity fundraiser, and competitions based on the descent time are also common.

"Teddy Bear" is a song made famous by country music singer Red Sovine. Released in 1976, the song was the title track to Sovine's album released that same year.

The Secret World of Benjamin Bear is a Canadian/UK animated television series produced by Red Kite Animation; PorchLight Entertainment and Amberwood Entertainment. It originally aired on Family Channel from 2003-2009 and aired reruns until 2015. Reruns on the show air on the French language channel TFO, but it is unknown if it will return to the air in English again. 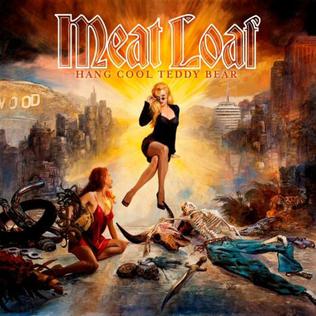 Hang Cool Teddy Bear is the tenth studio album by Meat Loaf. It was released on 19 April 2010 by Mercury Records in the UK and by Loud & Proud Records in the US on 11 May 2010, with global distribution handled by Universal Music Group.

Ryan Scott, is a Paralympic wheelchair rugby competitor from Australia. In four Paralympics, Scott has won a silver medal at the 2008 Beijing Paralympics and gold medals at the 2012 London and 2016 Rio Paralympics. 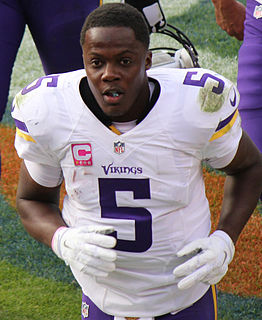 Theodore Bridgewater Jr. is an American football quarterback for the New Orleans Saints of the National Football League (NFL). He played college football at the University of Louisville, and was drafted by the Minnesota Vikings in the first round of the 2014 NFL Draft, with whom he made a Pro Bowl.

Anton Suryapin is a Belarusian photojournalist. On 13 July 2012, he was detained after publishing pictures of a protest by a Swedish advertising company in which teddy bears were airdropped into the country with slogans advertising freedom of speech.

Per Cromwell, born 13 September 1974 in Malmö, Sweden is a Swedish ad-man, activist and inventor. He is the co-founder of the creative agency Studio Total. Today he is managing the Swedish-Finnish company Nordic Society for Invention and Discovery.

Zuchon or Shichon is a hybrid breed dog or a designer dog. It is cross between Bichon Frisé and Shih Tzu.