Tomas Mikael Nord (born July 18, 1958) is a retired Swedish professional ice hockey defenceman. He played fifteen seasons in Elitserien, for Leksands IF and AIK IF. He won the Swedish Championship in 1984 with AIK.

Erik Johan Mattias "Notan" Norström is a Swedish retired professional ice hockey defenceman, currently working for the AIK organization. Norström began his National Hockey League career with the New York Rangers. However, he is most noted for his ten seasons as a member of the Los Angeles Kings for whom he served as team captain from 2001–2007; he was the team's first non-North American-born captain. Norström played the final season of his NHL career for the Dallas Stars.

Dick Tärnström is a Swedish retired professional ice hockey defenceman. During the majority of his 21-year-long playing career, Tärnström played for AIK of the Swedish top-tier league Elitserien (SEL). He was the captain for AIK during the five last seasons of his career. He also spent five years in the National Hockey League (NHL), playing for the New York Islanders, Pittsburgh Penguins, Edmonton Oilers, and Columbus Blue Jackets.

Allmänna Idrottsklubben Ishockeyförening, is the ice hockey department of sports club Allmänna Idrottsklubben based in Stockholm, Sweden. Since 2014 AIK's men's team compete in HockeyAllsvenskan, the second tier of ice hockey in Sweden, following a four-year spell in the top flight, the SHL. The women's team competes in Riksserien, the highest division of women's ice hockey. AIK's home games are mainly played at Hovet, which seats 8,050 spectators, though some high-profile games may be played at the Ericsson Globe which has a larger capacity of 13,850.

Allmänna Idrottsklubben, usually referred to as just AIK, is a professional sports club from Stockholm, Sweden. Founded in 1891, at the downtown address of Biblioteksgatan 8 in the district of Norrmalm, the club is the largest in Scandinavia. The club's achievements include Swedish championship titles in a slew of sports: football, ice hockey, bandy, handball, floorball, bowling, badminton, athletics and many other sports as well as Wimbledon championships and French Open in tennis.

Huddinge IK, is a Swedish ice hockey team from Huddinge, a southern suburb in Stockholm County. The team is currently playing in the third highest league in Sweden, Hockeyettan. In the middle of the 1990s, a women's floorball section was founded, whose A-team advanced to Elitserien, the highest league, in 2008. 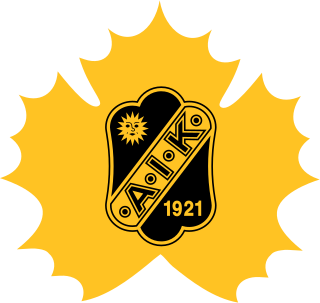 Skellefteå AIK is a Swedish professional ice hockey (SHL) club from Skellefteå, Sweden. The SHL is the highest level of ice hockey in Sweden. They play their games in Skellefteå Kraft Arena, which seats 6,001 spectators. The team has won the Swedish Championship three times – in 1978, 2013, and 2014.

Joakim Claes Lindström is a Swedish professional ice hockey winger currently playing for Skellefteå AIK of the Swedish Hockey League. Lindström has previously played in the National Hockey League (NHL) for the Columbus Blue Jackets, Phoenix Coyotes, Colorado Avalanche, St. Louis Blues and, most recently, for the Toronto Maple Leafs. He was drafted in the second round, 41st overall, by Columbus in 2002.

Roger Melin is a Swedish ice hockey coach and former player who most recently served as head coach of Leksands IF of the SHL. He has also previously coached SHL clubs Brynäs IF, Färjestad BK, Frölunda HC, AIK and Linköping HC, as well as Hammarby IF and Rögle BK in the Swedish second tier league. His playing career included five seasons in the SHL, with AIK, Örebro IK, and Hammarby, as well as several seasons in the second and third tiers with Väsby IK. His brief stint in North America during the 1980–81 and 1981–82 seasons was mostly spent in the CHL, though he also played 3 NHL games with the Minnesota North Stars

Per Ludvig Gösta Kaufeldt was a Swedish association football and bandy player. He who won a bronze medal at the 1924 Summer Olympics.

Tvillingderbyt is a football fixture in Stockholm, Sweden, between cross-town rivals AIK and Djurgårdens IF. Both clubs were founded in Stockholm in 1891, just three weeks apart, but they started playing football in 1896 and 1899 respectively.

Bert-Ola Nordlander is a retired Swedish ice hockey player and head coach. During his career he played for Wifsta/Östrand IF and AIK. In 1967 he was awarded the Golden Puck as the best player of the season. Nordlander began his coaching career in 1976 when he signed with Hammarby IF. In 1979 he moved to Djurgårdens IF and stayed there until 1981. AIK retired the number 5 in his honour. 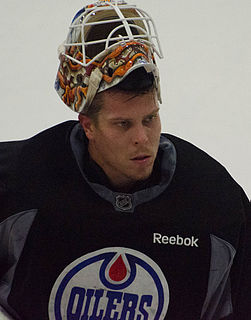 Erik Sixten Viktor Fasth is a Swedish professional ice hockey goaltender who is currently playing for the Växjö Lakers of the Swedish Hockey League (SHL). Fasth had his international breakthrough during the 2010–11 season, after signing with Stockholm team AIK in the SHL.

The 2011–12 Elitserien season was the 37th season of Elitserien. The regular season began on 13 September 2011 and ended on 6 March 2012. The following playoffs began on 10 March 2012 and ended on 19 April. Färjestad BK were the defending Swedish Champions. Brynäs IF won their first Swedish Championship title since 1999, as well as their 13th in history, after defeating Skellefteå AIK in six games.

The Swedish Ice Hockey Leader of the Year is an annual award given to the best ice hockey leader in Sweden each season. The award was first given in the 1991–92 season, and Kamratföreningen Hockeyjournalisterna is the jury which votes on the award. Swedish businessman Percy Nilsson gives out the award since 2006.

Mattias Janmark-Nylén, also known as Mattias Janmark, is a Swedish professional ice hockey center who is currently playing for the Dallas Stars in the National Hockey League (NHL). Janmark was drafted 79th overall by the Detroit Red Wings in the 2013 NHL Entry Draft.

The marathon standings for the top Swedish ice hockey league refers to a summation of the final regular season standings for all seasons of all of the leagues that have functioned as the highest tier of Swedish ice hockey. This includes Klass I (1922–27), the original Elitserien (1927–35), Svenska Serien (1935–44), Division I (1944–75), and the Swedish Hockey League (SHL) under both its former name and its current name.