Vittoria Colonna, marchioness of Pescara, was an Italian noblewoman and poet. As an educated, married noblewoman whose husband was in captivity, Colonna was able to develop relationships within the intellectual circles of Ischia and Naples. Her early poetry began to attract attention in the late 1510s and she ultimately became one of the most popular female poets of 16th-century Italy. Upon the early death of her husband, she took refuge at a convent in Rome. She remained a laywoman but experienced a strong spiritual renewal and remained devoutly religious for the rest of her life. Colonna is also known to have been a spiritual mentor to Michelangelo Buonarroti, himself a poet.

Girolamo Ruscelli (1518–1566) was an Italian Mathematician and Cartographer active in Venice during the early 16th century. He was also an alchemist, writing pseudonymously as Alessio Piemontese.

Giovanni Maria Verdizotti was a well-connected writer and artist who was born in Venice in 1525 and died there in 1600.

Girolamo Porro was an Italian engraver on wood and on copper. He was born at Padua and spent most of his working career in Venice. He engraved for a book entitled Imprese illustri di diversi, published by Camillo Camilli in 1535. He executed the plates for the Orlando Furioso of Ariosto, published at Venice in 1584; for the Funerali antichi di diversi Popoli et Natione, by Tommaso Porcacchi, published in 1574; and the portraits for the Sommario delle Vite do' Duchi di Milano by Scipione Barbuo, in 1574. The maps in Girolamo Ruscelli's translation of the Geographia of Ptolemy, 1574, and the maps in Porcacchi's Isole piu famose del Mondo, first published in 1572, are likewise by him. 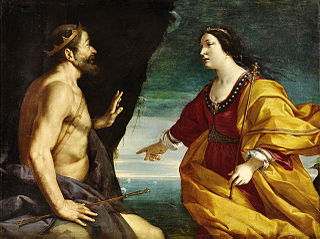 Antonio Randa was an Italian painter of the classicist period, active in Ferrara, Modena, Rovigo, Florence, Comacchio and his native Bologna.

Alessandro Borgia was an Italian bishop and archbishop.

Giuseppe Leggiadri Gallani was an Italian poet and dramatist. He was a native of Parma in the era of the rule of the Farnese family.

Francesco Cattani da Diacceto was a Florentine Neoplatonist philosopher of the Italian Renaissance.

Alessandro Lionardi or Leonardi was an Italian poet from Padova, active in the mid-16th century. He was a doctor of law, and author of an important treatise on poetry and rhetoric, the Dialogi. He is the author of the texts of Alfonso Ferrabosco's five-voice madrigals Vidi pianger madonna and Come dal ciel seren rugiada sole.

Pomponio Torelli was Count of Montechiarugolo and a writer of prose, poetry and plays. He is principally remembered for his five tragedies.

The Morgetes are a largely mythical ancient Italic people, who are meant to have occupied areas of Calabria and Sicily.

Antonio Mongitore was a Sicilian presbyter, historian and writer, known for his works about the history of Sicily. He was also canon of the cathedral chapter of Palermo.

Andrea Pisani was a Venetian noble who served as Captain General of the Sea during the Seventh Ottoman–Venetian War. 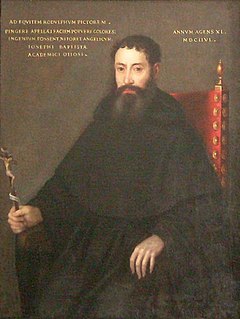 Angelico Aprosio was an Italian Augustine monk, scholar, and bibliophile.