Last updated March 15, 2019
Not to be confused with Thomas the Slav.

Tomaso Schiavo or Thomaso Schiavo di Lebano (Italian : Tommaso Schiavo; "Thomas the Slav"; fl. 1470) was a Venetian Dalmatian captain and mercenary commander that participated in the Ottoman–Venetian War (1463–79). He commanded a mercenary unit numbering 500 men largely recruited from Dalmatia. During the 1470 Ottoman siege of Venetian Negroponte the Venetians uncovered that he had sent envoys to the Ottomans; a deep conspiracy was unearthed and Schiavo's associates were arrested. His brother was tortured to death, giving up plans of an Ottoman attack. Schiavo, unknowing, was summoned by Erizzo and then killed. 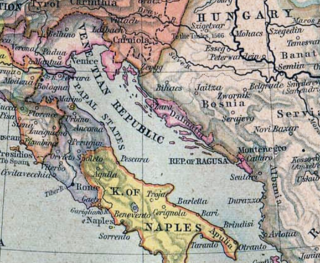 Venetian Dalmatia refers to parts of Dalmatia under the rule of the Republic of Venice, mainly from the 16th to the 18th centuries. The first possessions were acquired around 1000, but Venetian Dalmatia was fully consolidated from 1420 and lasted until 1797 when the republic disappeared with Napoleon's conquests.

The Siege of Negroponte was fought between the forces of the Ottoman Empire, led by Sultan Mehmed II in person, and the garrison of the Venetian colony of Negroponte (Chalcis), the capital of the Venetian possession of Euboea in Central Greece. It lasted for almost a month, and despite great Ottoman casualties ended in the capture of the city and the island of Euboea by the Ottomans.

Murad IV was the Sultan of the Ottoman Empire from 1623 to 1640, known both for restoring the authority of the state and for the brutality of his methods. Murad IV was born in Istanbul, the son of Sultan Ahmed I and Kösem Sultan. He was brought to power by a palace conspiracy in 1623, and he succeeded his uncle Mustafa I. He was only 11 when he ascended the throne. His reign is most notable for the Ottoman–Safavid War (1623–39), of which the outcome would permanently part the Caucasus between the two Imperial powers for around two centuries, while it also roughly laid the foundation for the current Turkey–Iran–Iraq borders.

Mehmed IV was the Sultan of the Ottoman Empire from 1648 to 1687. He came to the throne at the age of six after his father was overthrown in a coup. Mehmed went on to become the second longest reigning sultan in Ottoman history after Suleiman the Magnificent. While the first and last years of his reign were characterized by military defeat and political instability, during his middle years he oversaw the revival of the empire's fortunes associated with the Köprülü era. Mehmed IV was known by contemporaries as a particularly pious ruler, and was referred to as gazi, or "holy warrior" for his role in the many conquests carried out during his long reign. Under his reign the empire reached the height of its territorial expansion in Europe. From a young age he developed a keen interest in hunting, for which he is known as avcı. In 1687 Mehmed was overthrown by soldiers disenchanted by the course of the ongoing War of the Holy League. He subsequently retired to Edirne, where he resided until his natural death in 1693.

Istanbul University is a prominent Turkish university located in Istanbul.

Köprülü Mehmed Pasha was the founder of the Köprülü political dynasty of the Ottoman Empire, a family of viziers, warriors, and statesmen who dominated the administration of the Ottoman Empire during the last half of the 17th century, an era known as the Köprülü era. He helped rebuild the power of the empire by rooting out corruption and reorganizing the Ottoman army. As he introduced these changes, Köprülü also expanded the borders of the empire, defeating the Cossacks, the Hungarians, and most impressively, the Venetians. Köprülü's effectiveness was matched by his reputation.

Afife Nurbanu Sultan was Haseki Sultan of the Ottoman Empire as the principal consort and later legal wife of Sultan Selim II, as well as Valide Sultan as the mother of Sultan Murad III. Conflicting theories ascribe her a Venetian, Jewish or Greek origin. Her birth name may have been Cecilia Venier-Baffo, Rachel or Kalē Kartanou. Nurbanu was one of the prominent figures during the era known as Sultanate of Women.

Đurađ Crnojević was the Lord of Zeta between 1490 and 1496. The son of Ivan Crnojević and Goisava Arianiti, he was the founder of the first South Slavic printing house. Crnojević styled himself "Duke of Zeta". He was well known by his great education, knowledge of astronomy, geometry and other sciences.

Lala Mustafa Pasha, also known by the additional epithet Kara, was an Ottoman general and Grand Vizier from the Sanjak of Bosnia.

Levend or levendi was a name for irregular soldiers. The term originated with the Ottoman Navy, but eventually spread to encompass most irregular troops.

The Cretan War or War of Candia, is the name given to the Fifth Ottoman–Venetian War, a conflict between the Republic of Venice and her allies against the Ottoman Empire and the Barbary States, because it was largely fought over the island of Crete, Venice's largest and richest overseas possession. The war lasted from 1645 to 1669 and was fought in Crete, especially in the city of Candia, and in numerous naval engagements and raids around the Aegean Sea, with Dalmatia providing a secondary theater of operations. 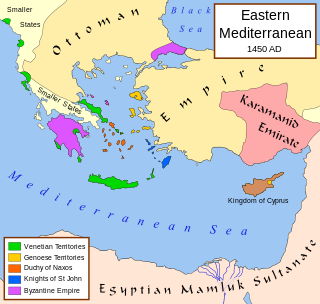 The First Ottoman–Venetian War was fought between the Republic of Venice and her allies and the Ottoman Empire from 1463 to 1479. Fought shortly after the capture of Constantinople and the remnants of the Byzantine Empire by the Ottomans, it resulted in the loss of several Venetian holdings in Albania and Greece, most importantly the island of Negroponte (Euboea), which had been a Venetian protectorate for centuries. The war also saw the rapid expansion of the Ottoman navy, which became able to challenge the Venetians and the Knights Hospitaller for supremacy in the Aegean Sea. In the closing years of the war, however, the Republic managed to recoup its losses by the de facto acquisition of the Crusader Kingdom of Cyprus.

The Albanian–Venetian War of 1447–48 was waged between Venetian and Ottoman forces against the Albanians under George Kastrioti Skanderbeg. The war was the result of a dispute between the Republic and the Dukagjini family over the possession of the Dagnum fortress. Skanderbeg, then ally of the Dukagjini family, moved against several Venetian held towns along the Albanian coastline, in order to pressure the Venetians into restoring Dagnum. In response, the Republic sent a local force to relieve the besieged fortress of Dagnum, and urged the Ottoman Empire to send an expeditionary force into Albania. At that time the Ottomans were already besieging the fortress of Svetigrad, stretching Skanderbeg's efforts thin.

The Linobambaki or Linovamvaki are a Crypto-Christian Catholic community in Cyprus who were persecuted for their religion during Ottoman rule. They assimilated into the Turkish Cypriot community during British rule.

Kara Murat Pasha, or Kara Dev Murat Pasha, was an Ottoman statesman and military officer. He served as Kapudan Pasha and twice as Grand Vizier. His epithet Kara ("black") refers to his courage and Dev ("giant") to his physical size.

Callinicus IV, born Constantine Mavrikios, was Ecumenical Patriarch of Constantinople for a few months in 1757 and a writer and scholar.

The Kingdom of the Morea or Realm of the Morea was the official name the Republic of Venice gave to the Peloponnese peninsula in southern Greece when it was conquered from the Ottoman Empire during the Morean War in 1684–99. The Venetians tried, with considerable success, to repopulate the country and reinvigorate its agriculture and economy, but were unable to gain the allegiance of the bulk of the population, nor to secure their new possession militarily. As a result, it was lost again to the Ottomans in a brief campaign in June–September 1715.

The Siege of Negroponte was undertaken by the forces of the Republic of Venice from July to October 1688. The Venetian army, composed of several mercenary and allied contingents from western Europe, had succeeded in capturing the Peloponnese in the previous years, and proceeded to capture Athens and attack Negroponte, the main Ottoman stronghold in Central Greece. The Venetian siege was hampered by the Ottoman resistance and their inability to completely isolate the town, as the Ottoman general Ismail Pasha managed to ferry supplies to the besieged garrison. Furthermore, the Venetian army suffered many casualties from an outbreak of the plague in the Venetian camp, which led to the death of 4,000 troops and the experienced general Otto Wilhelm Königsmarck. The departure of the Florentine and Maltese contingents further weakened the Venetians, and when the German mercenaries refused to remain there in winter quarters, the Venetian commander, Doge Francesco Morosini, had to concede defeat and retreat to the Peloponnese.

Hadım Hafız Ahmed Pasha was an Ottoman statesman who served as the governor of Egypt from 1590 or 1591 to 1594. Previously, he had served as governor (beylerbey) of Cyprus, and he became a vizier along with his appointment to Egypt. After Egypt, he became the governor of Bursa from 1594 to 1595. His epithet Hadım means "eunuch" in Turkish.

The Zenevisi or Zenebishi was a medieval noble family in southern Albania that served the Angevins, Venetians and Ottomans, and at times was also independent. They governed territories in Epirus, centered in Gjirokaster.

Solomon ben Nathan Ashkenazi was a Jewish physician and businessman active in Ottoman politics during the late 16th century. Ashkenazi wielded considerable influence, most famously helping bring about the Jews’ readmission to Venice in 1573.