Born in Brescia in 1947, he obtained a degree in law before beginning his career at SIP (Società Idroelettrica Piemontese SpA) in the Personnel Department. In 1989 he assumed the position of Personnel Director for the SIP Group. From December 1992 to May 1994 as CEO of Iritel SpA he undertook to transform the old state company into a new company which subsequently merged with Telecom Italia.

From 1994 to 1997 Di Vignano was general manager of Telecom Italia, responsible for the International, Business Customer and Residential Customer Divisions. In 1997, as CEO of STET - Società Finanziaria Telefonica, he successfully completed the merge of the company with Telecom Italia.

In 1997 he was appointed CEO of Telecom Italia and guided the process of complete privatization of the Group.

From 1999 to 2002 he held the post of Managing Director of the multiutility ACEGAS SpA in Trieste, and managed the process of privatization of that company, up through its placement on the stock market.

Since November 2002 Di Vignano has been CEO of Hera Group, where he managed the process of placing the company on the stock exchange, which took place in June 2003. Married with two children, he currently lives in Rome.

Lucent Technologies, Inc., was an American multinational telecommunications equipment company headquartered in Murray Hill, New Jersey, in the United States. It was established on September 30, 1996, through the divestiture of the former AT&T Technologies business unit of AT&T Corporation, which included Western Electric and Bell Labs.

Magyar Telekom Nyrt. is the largest Hungarian Telecommunications company. The former monopolist is now a subsidiary of Deutsche Telekom. Until 6 May 2005, it was known as MATÁV. The company was formed under the name of Magyar Távközlési Vállalat in December 1989, when Magyar Posta was split to three separate enterprises. On 31 December 1991, the company was re-structured as a Public Limited Company, as Magyar Távközlési Rt., and the company remained in 100% state ownership until the end of 1993. On 1 July 1993, the Telecommunications Act came into effect, and now it was possible to privatize the company. A consortium was formed by Deutsche Telekom and Ameritech International, which was named MagyarCom, and bought into the company a share of 30.1% for a price of 875 million USD.

KPN is a Dutch landline and mobile telecommunications company. KPN originated from a government-run postal, telegraph and telephone service and is based in Rotterdam, Netherlands. 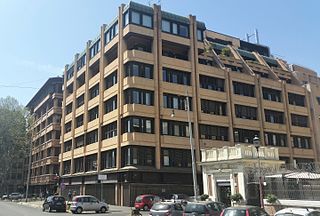 Thierry Breton is a French businessman and politician who has been serving as the European Commissioner for Internal Market since 2019. He previously was a professor at Harvard Business School and a Finance minister of France. In the private sector, he has been vice-chairman and CEO of Groupe Bull, Chairman and CEO of Thomson-RCA (1997–2002), Chairman and CEO of France Télécom (2002–2005). An Honorary Chairman of both Thomson and France Telecom, he most recently Chairman and CEO of international information technology services company Atos from 2008 until 2019. 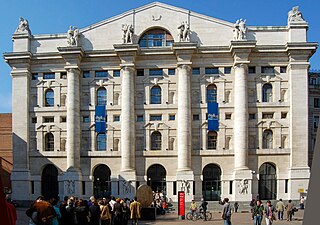 The Italian Bourse, based in Milan, is Italy's only stock exchange. It manages and organises domestic market, regulating procedures for admission and listing of companies and intermediaries and supervising disclosures for listed companies.

Mediobanca is an Italian investment bank founded in 1946 at the initiative of Raffaele Mattioli and Enrico Cuccia to facilitate the post-World War II reconstruction of Italian industry. Cuccia led Mediobanca from 1946 to 1982. Today, it is an international banking group with offices in Milan, Frankfurt, London, Madrid, Luxembourg, New York and Paris.

Wind Telecomunicazioni S.p.A. was an Italian telecom operator which offers integrated mobile, fixed telephony and Internet services. Wind Italy had 21.6 million mobile customers with a market share of 22.9% and 2.8 million customers on fixed lines with a market share of 13.2%. The company served through a network of 159 owned stores and around 498 exclusive franchised outlets under the WIND brand, as well as 396 electronic chain stores. In 2016, Wind merged with 3 Italy to form Wind Tre.

BT Global Services is a division of United Kingdom telecommunications company BT Group that provides global security, cloud and networking services to multinational companies worldwide, with operations in 180 countries. It was established in July 2000 as BT Ignite.

Vito Gamberale is an Italian manager.
In 1968 he obtained his master's degree in mechanical engineering at La Sapienza University in Rome, and started working as assistant professor at the mechanical Engineering department. From 1968 to 1969 he worked at Azienda Nazionale Idrogenazione Combustibili in Milan; later he became the Istituto Mobiliare Italiano (IMI)'s evaluation expert in textile, clothing, iron and steel, and mechanical industries, until 1977. 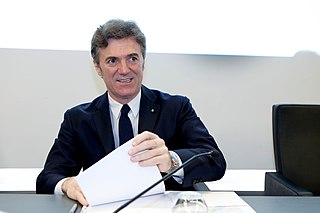 Excel Communications is a now defunct multi-level marketing (MLM) telecommunications company that was at one point America's fifth-largest long-distance carrier.

Valsella Meccanotecnica SpA was one of Italy's largest manufacturers of land mines. The Company's headquarters initially were in Montichiari. It had two production plants in Castenedolo near Brescia, Italy. The three companies of Valsella, Tecnovar Italiana SpA, and Misar SpA together were the centre of Italian mine production.

Marco Patuano is an Italian economist, manager and CEO of Telecom Italia since April 2011.

Stefano Siragusa, is an Italian executive. He is currently COO - Chief Operating Officer of TIM.

Giuseppe Recchi is an Italian owner of several companies and firm manager. In January 2018 he became CEO of Affidea Group BV.

Italtel Ltd. is an Italian telecommunications equipment and ICT company founded in 1921, originally as a branch of Siemens AG. It played a major role in the development of telecommunication systems in Italy, most notably as one of the main equipment providers for the Italian state monopoly telephone operator SIP and as the leading actor in the evolution of the Italian PSTN from analog to digital switching. At its maximum prosperity, the company grew to over 30.000 employees. 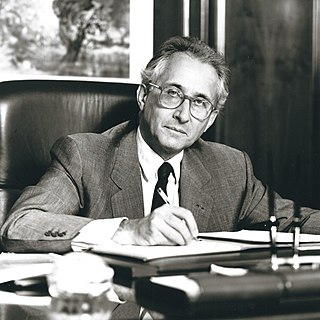 Roberto Pontremoli is an Italian insurance executive. From 1993 to 1999 was CEO of the Istituto Nazionale delle Assicurazioni (INA). He founded in 1994 the Rotary Internetional club of Milan.