Tomasz Jasiński may refer to:

Tomasz Jasiński is a Polish historian, dean of the History Department at the Adam Mickiewicz University in Poznań. He specializes in medieval history of Poland.

Tomasz Jasiński was a Polish ice hockey player. He played for Czarni Lwów, Spartak Lwów, Wisła Kraków, Stal Katowice and KTH Krynica during his career. In 1935 he won the Polish league title with Czarni Lwów. Jasiński also played for the Polish national team at the 1948 Winter Olympics.

ŁKS Łódź is a Polish sports club that is owned by Łódź city council. They are best known for their football club, but are represented in many sports such as basketball, volleyball, tennis, athletics and in the past ice hockey. The club is based at Stadion LKS, at Al. Unii Lubelskiej 2 in the West of Łódź. The club was founded in 1908. The football section had since been sold to private investors as the city could no longer afford to support it. After years of financial hardships, the club declared bankruptcy in May 2013. and was re-founded by a partnership between fans and local investors in the fifth tier of the league pyramid. 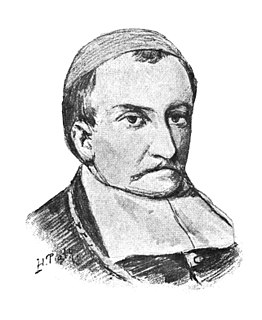 Gallus Anonymus is the name traditionally given to the anonymous author of Gesta principum Polonorum, composed in Latin about 1115. Gallus is generally regarded as the first historian to have described Poland. His Chronicles are an obligatory text for university courses in Poland's history. Very little is known of the author himself.

Leszek of Masovia was a Polish prince from the Piast dynasty, the Duke of Masovia from 1173 until his death. He was the only son of Bolesław IV the Curly, Duke of Masovia and High Prince of Polan, who survived father. After his father death he inherited Masovia. At the beginning, Leszek ruled under the guardianship of his uncle Kazimierz II the Just. He was a man of poor health. For a short time he supported his other uncle, Mieszko III the Old, but later decided to reconciled with Kazimierz II, who after Leszek's death inherited his duchy.

Jabłoński is a Polish surname derived from the noun jabłoń. It appears in various forms when transliterated from Cyrillic alphabets.

Jasiński is a Polish surname. Notable people with the surname include:

Stankiewicz, Stankevich, or Stankievič is a Polish and Belarusian surname. It appears in various forms depending on the language.

The Poland national futsal team is controlled by the Polish Football Association, the governing body for futsal in Poland and represents the country in international futsal competitions, such as the World Cup and the European Championships.

STS Sanok is an ice hockey team in Sanok, Poland. The team is playing its first season in the Eastern Division of the Slovak 2. Liga, the third tier of ice hockey in Slovakia. The team was inactive during the 2016-2017 season due to financial difficulties. Before that, the team competed in the Polska Liga Hokejowa (PHL), the top-level hockey league in Poland.

MKS Cracovia SSA, commonly referred to as Cracovia Kraków and currently playing as ComArch Cracovia for sponsorship reasons, is an ice hockey team in Kraków, Poland. They play in the Polska Hokej Liga.

Adamiec is a Polish surname. Notable people with the surname include:

Andrzej Tomasz Iskrzycki is a former Polish ice hockey player. He played for the Poland men's national ice hockey team at the 1976 Winter Olympics in Innsbruck.

Domagała is a surname of Polish language origin, derived from the verb domagać, "the one who demands". Notable people with this surname include:

Mieczysław Kasprzycki was a Polish ice hockey player. He played for HC Vítkovice, Slavia Praha, AZS Katowice, Dąb Katowice, Cracovia, and KTH Krynica during his career. Born in Ostrava, in what is now the Czech Republic, Kasprzycki first played hockey there and moved to Poland in 1935. He won the Polish league title five times in his career. Jasiński also played for the Polish national team at the 1936 and 1948 Winter Olympics, and two World Championships: in 1939 and 1947. After retiring he coached the Polish national team from 1952 until 1955, including the 1952 Winter Olympics and three World Championships.

Maksymilian Więcek was a Polish athlete. Most notable as an ice hockey player, he played for Cracovia and Legia Warsaw during his career. He won the Polish league title ten times during his career, three with Cracovia and seven with Legia. Jasiński also played for the Polish national team at the 1948 Winter Olympics. After his playing career he studied medicine, receiving a doctorate from the Jagiellonian University Medical College in 1964.