Tomasz Urbanowicz (born 1959 in Wrocław, Poland) is an architect and a designer of architectural glass art.

Tomasz Urbanowicz graduated at the Faculty of Architecture of the Wrocław University of Technology (1978–85). He took glass-window studies at the Fine Arts Academy of Nicolaus Copernicus University in Toruń, Poland (1982–85) and worked as an assistant in the Painting and Sculpture Establishment at the Architecture Department of Wrocław Institute. [1] In 1987, together with his wife, architect Beata Urbanowicz, he established his own studio, Archiglass, focused on creating architectural glass art. In 2016, Tomasz Urbanowicz was awarded the Honorable Graduate Award by Wrocław University of Technology. [2]

His glassworks were featured in 'Colours of Architecture' by Andrew Moor (London, 2006), [3] 'Contemporary Kiln-formed Glass' by Keith Cummings ( London / Philadelphia 2009) [4] and 'Szkło we Współczesnej Architekturze' by Ewa Wala. [5]

Urbanowicz's artworks took part in World Fairs EXPO three times representing Poland; at EXPO 2000 in Hanover, Germany [6] - as part of the presentation of Lower Silesia; at EXPO 2005 in Aichi, Japan, [7] [8] where his glass composition ‘the Soul of the Piano’ was the main artefact in the Polish Pavilion, designed by prof. Krzysztof Ingarden, [9] and at EXPO 2008 in Zaragoza, Spain, where his composition ‘Poland - Wind in the Sails’ was part of the national presentation. [10]

Architectural glass art composition by Tomasz Urbanowicz can also be found in many places around the world: the glass orb ‘The United Earth’ is a central artistic element on European Parliament building agora in Strasbourg, France; [7] [11] the glass rainbow ‘Larc en ciel’ decorates G. Brassens College in Paris, France; green glass castings enlight the lobby of the Holsten Brewery Headquarters in Hamburg, Germany; [7] and the composition ‘Blue Sunset in the Ocean’ cruises around the world on one of the world's biggest ocean liners Queen Mary 2. [12]

One of the artist's works is a complex architectural glass composition with diverse musical notations in the foyer of the newly built Podlasie Opera and Philharmonic building in Białystok, Poland. [7] [13] [14] [15]

In 2014, Urbanowicz's glass art works from the 'GlassHenge' series were exhibited at the Wrocław Airport. [16] [17]

In the years 2018-2019 Tomasz Urbanowicz together with prof. Przemysław Tyszkiewicz developed a new own technique to consolidate graphics in glass art. [18] [19] They created several joint works called 'Corsydians' series, exhibited among others at the collective exhibition "Para.Ceramics.Prints' in Oblastni galerie in Liberec [20] or the collective exhibition "Robinson's Ship" organized by the City Gallery and Museum of Architecture in Wrocław. [21] [22]

The latest realizations of large-scale architectural glass art, made by Tomasz Urbanowicz in cooperation with his son, arch. Konrad Urbanowicz, include the composition "The Spirit of Health" at the Integrative Medical Center Clinic in Żerniki Wrocławskie [23] and the glass art EGG - concierge desk in the baroque interior of the historic Main Building of the University of Wrocław. [24] 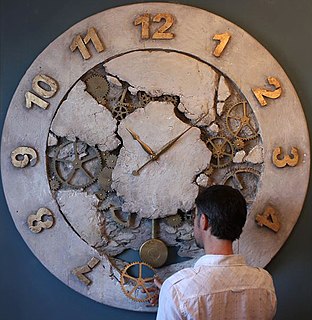 Jarosław Kukowski is a Polish contemporary painter, juror of international art competitions. His works were exhibited, among others Branch Museum of the National-Królikarnia Salons Rempex Auction House, the Museum of Galicia, the Contemporary Art Gallery, Castle Voergaard, the Art Expo New York and many other galleries and museums in the world. He is considered one of the most influential contemporary creators of the Surrealist circle.

Józef Jan Gosławski was a Polish sculptor and medallic artist. He was a designer of coins, monuments and medals. Laureate of many artistic competitions; decorated with the Silver Cross of Merit.

Kasia Domanska is a Polish painter. 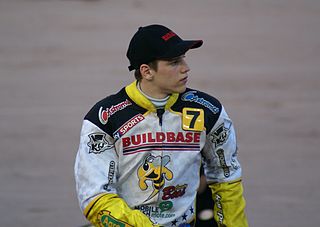 Mannerist architecture and sculpture in Poland dominated between 1550 and 1650, when it was finally replaced with baroque. The style includes various mannerist traditions, which are closely related with ethnic and religious diversity of the country, as well as with its economic and political situation at that time. The mannerist complex of Kalwaria Zebrzydowska and mannerist City of Zamość are UNESCO World Heritage Sites.

SWPS University of Social Sciences and Humanities or simply SWPS University is a private non-profit university in Poland established in 1996 by three professors of Psychology, Andrzej Eliasz, Zbigniew Pietrasiński and Janusz Reykowski.

Eugeniusz Geno Małkowski was a Polish painter. Małkowski was a professor of contemporary art at the University of Warmia and Mazury in Olsztyn, founder of artistic groups and associations throughout Poland, organizer of modern art exhibitions, and popularizer of art. He was known for his speed painting happenings in which he invited people to paint together. In 2005, in Bełchatów, he beat the Guinness World Record for the 24-hour-long-painting performance.

Anna Ziaja is a Polish contemporary painter and print maker.

United Earth is a public artwork by Tomasz Urbanowicz and Beata Urbanowicz in the Agora of the Seat of the European Parliament in Strasbourg. The glass sculpture has a diameter of 180 cm (71 in) and symbolizes the idea of openness to further expansion of the European Union in order to create a united world.

Andrzej Bryl was a Polish doctor of social sciences, an international expert in the field of close combat, creator of the BAS-3 combat system and president of the ITF Polish Federation of Taekwondo.

Romanesque House in Wrocław, or House of the Ladies of Trzebnica in Wrocław, is a Romanesque villa at Plac Biskupa Nankiera in Wrocław. More precisely, it is an early-Gothic building with Romanesque elements that dates back to the beginning of the 13th century, partly reconstructed after World War II. It was the centre for the Cistercians of Trzebnica, which is why it was called the House of the Ladies of Trzebnica. Nearby, along the Kotlarska Street, were the Nowe Jatki, a medieval shopping center belonging to the monastery.

Zbigniew Horbowy was a Polish artist working in industrial design, both artistic and applied glassmaking, professor in the Faculty of Ceramics and Glass and rector of the Academy of Fine Arts in Wrocław. He was an influential Polish designer of utility glass and created his own design school.

Zygmunt Świechowski was a Polish art historian and architectural conservator with a particular interest in the Romanesque era. Świechowski was also a leading figure in architectural preservation and restoration work in Poland, and he used photography extensively to illustrate his books as well as in a number of public exhibitions. His best-known work is Romanesque Art in Poland, with 28 editions published between 1982 and 1990 in six languages.

The Church of St. Mary on the Sand is a Catholic church in Wrocław, in Silesia, located on a small island in the Oder River, in the heart of the city. Founded in the 12th century, it is one of the oldest Gothic churches in the country.