The Tomb of Amyntas, also known as the Fethiye Tomb, is an ancient Greek rock-hewn tomb at ancient Telmessos, in Lycia, currently in the district of Fethiye in Muğla Province, located in the Aegean region of Turkey.

Modern Fethiye is located on the site of the Ancient Greek city of Telmessos, with the Tomb of Amyntas located in the south side of the city in the mountainside, in the base of the mountain. The impressive looking tomb was built in 350 BC, and was named after the Greek inscription on the side of it which reads "Amyntou tou Ermagiou", which translated to English means "Amyntas, son of Hermagios". [1]

The tomb was built by the Lycians, the people who lived in this area of Turkey at the time. The Lycians were never members of a specific country, but rather a tightly-knit confederation of independent city-states, which included Telmessos.

Compared to many other tombs carved into mountainsides in the area, the interior of the Tomb of Amyntas is very spacious. [2] 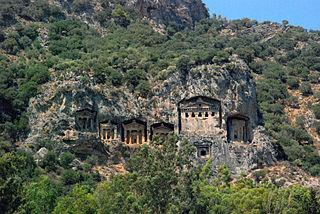 Lycia was a geopolitical region in Anatolia in what are now the provinces of Antalya and Muğla on the southern coast of Turkey, bordering the Mediterranean Sea, and Burdur Province inland. Known to history since the records of ancient Egypt and the Hittite Empire in the Late Bronze Age, it was populated by speakers of the Luwian language group. Written records began to be inscribed in stone in the Lycian language after Lycia's involuntary incorporation into the Achaemenid Empire in the Iron Age. At that time (546 BC) the Luwian speakers were decimated, and Lycia received an influx of Persian speakers. Ancient sources seem to indicate that an older name of the region was Alope. 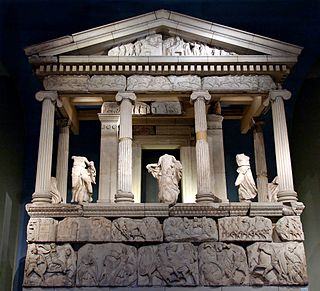 Xanthos was a city in ancient Lycia, the site of present-day Kınık, Antalya Province, Turkey, and of the river on which the city is situated. The ruins of Xanthus are on the south slopes of a hill, the ancient acropolis, located on the northern outskirts of the modern city, on the left bank of the Xanthus, which flows beneath the hill. A single road, Xantos yolu, encircles the hill and runs through the ruins. Xanthos is a designated UNESCO World Heritage Site, the centre of the Lycian civilization, exerted significant architectural influences upon other cities of the region, with the Nereid Monument directly inspiring the Mausoleum at Halicarnassus in Caria. 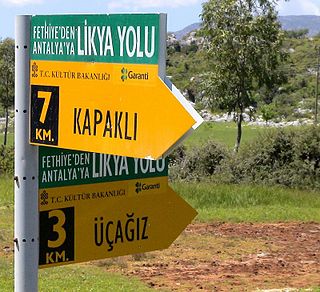 The Lycian Way is a marked long-distance trail in southwestern Turkey around part of the coast of ancient Lycia. It is over 500 km (310 mi) in length and stretches from Hisarönü (Ovacık), near Fethiye, to Geyikbayırı in Konyaaltı about 20 km (12 mi) from Antalya. It is waymarked with red and white stripes of the Grande Randonnee convention. It was conceived by Briton Kate Clow, who lives in Turkey. It takes its name from the ancient civilization, which once ruled the area. 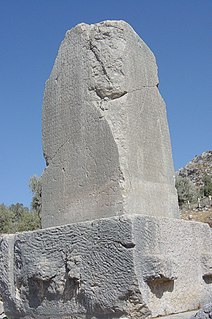 The Lycian language was the language of the ancient Lycians who occupied the Anatolian region known during the Iron Age as Lycia. It is long extinct, having been replaced by the Ancient Greek language during the Hellenization of Anatolia. 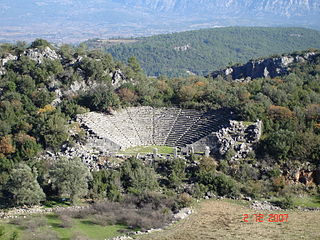 Pinara was a large city of ancient Lycia at the foot of Mount Cragus, and not far from the western bank of the River Xanthos, homonymous with the ancient city of Xanthos. 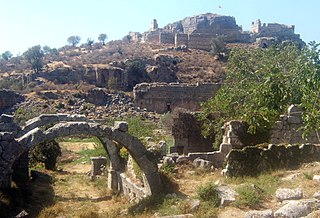 Tlos is an ancient ruined Lycian hilltop citadel near the resort town of Fethiye in the Mugla Province of southern Turkey, some 4 kilometres northwest of Saklikent Gorge. Tlos is believed to be one of the most important religious Lycian sites and settlement on the site is said to have begun more than 4,000 years ago. 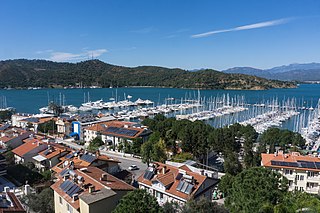 Fethiye is a city and district of Muğla Province in the Aegean Region of Turkey. It is one of the prominent tourist destinations in the Turkish Riviera. In 2019 its population was 162,686. 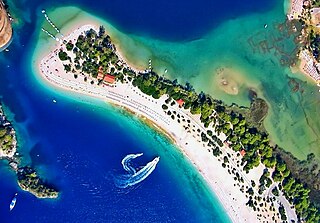 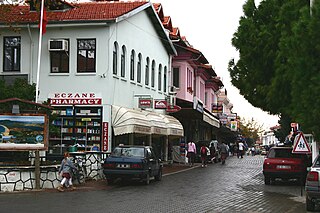 Dalyan is a town in Muğla Province located between the well-known districts of Marmaris and Fethiye on the south-west coast of Turkey. The town is an independent municipality, within the administrative district of Ortaca. 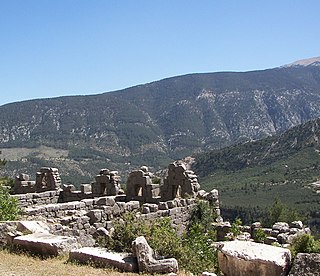 Arycanda or Arykanda is an Ancient Lycian city, former bishopric and present Catholic titular see in Antalya Province in the Mediterranean Region of Turkey. Arykanda was built upon five large terraces ascending a mountain slope, located near the small village of Aykiriçay, presently on the Elmalı-Finike road. 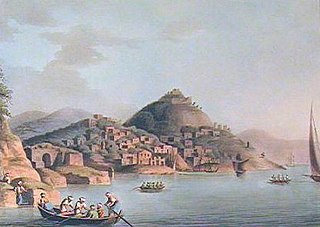 Telmessos or Telmessus, also Telmissus, later Anastasiopolis, then Makri or Macre, was the largest city in Lycia, near the Carian border, and is sometimes confused with Telmessos in Caria. It was called Telebehi in the Lycian language. The well-protected harbor of Telmessos is separated from the Gulf of Telmessos by an island.

Cadyanda or Kadyanda was a town of ancient Lycia. The site was discovered by Charles Fellows. The decree of Pixodarus now in the British Museum shows that the Lycian name of the town was Xadawãti. 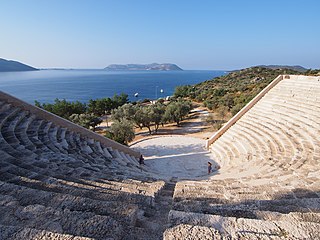 Antiphellus or Antiphellos was city that acted as the port of Phellus (Phellos) in Lycia. It was at the head of a bay on the south coast. Sir Francis Beaufort, the discoverer of this ancient site, gave the contemporary name of Vathy to the bay at the head of which Antiphellus stands. 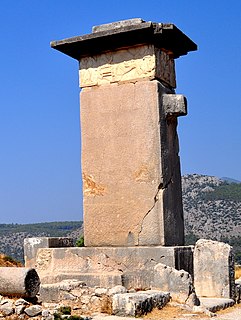 Tersane Island is a Mediterranean Island of Turkey.

Arsada or Arsadus was a city of ancient Lycia, located over the valley of the Xanthus between the ancient cities of Tlos and Xanthus.

Lydae or Lydai was a town of ancient Caria or Lycia. Ptolemy notes the city in Lycia under the name Chydae. The Stadiasmus Maris Magni calls the city Clydae or Klydai (Κλυδαί) and places it in Caria. The family of Gaius Iulius Heliodoros from Lydae, which produced Lycian Federal Priests, an archiphylax, and a Roman Senator, is well-documented. The demoi of Lydae, Arymaxa and Kreneis are known in Roman imperial times; they used to be separate communities that merged with Lydae via sympoliteia. 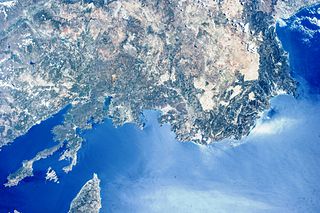 Teke Peninsula, also known as Teke Region, is a peninsula located in southwestern Turkey between the gulfs of Antalya and Fethiye extending into the Mediterranean Sea. It is bordered to the Turkish Lakes Region in the north.