The Tomb of Ghiyas ud din Balban is located in Mehrauli, New Delhi, India. Built in circa 1287 CE in rubble masonry, the tomb is a building of historical importance in the development of Indo-Islamic architecture, as it was here that first Islamic arch made its appearance in India, [1] [2] and according to many, the first Islamic dome as well, which however hasn't survived, making Alai Darwaza built in 1311 CE, in the nearby Qutb complex, the earliest surviving dome in India. [3] Ghiyas ud din Balban (1200–1287) was a Turkic ruler of the Delhi Sultanate during the rule of Mamluk dynasty of Delhi (or Slave dynasty) from 1266 to 1287. He was one of the most prominent rulers of the Slave Dynasty. The tomb of Balban was discovered in the mid-20th century.

It is an imposing stone and masonry building, though lacking the splendid ornamentation to be seen in the tomb of his master, Iltutmish. The tomb is surrounded by the ruins of an extensive late-medieval settlement and it offers, from certain angles, a remarkable view of the Qutub Minar. To the east of Balban's tomb, lies a ruined rectangular structure said to be the grave of Khan Shahid, Balban's son, whose original name was Muhammad, who died fighting against the Mongols near Multan in 1285. 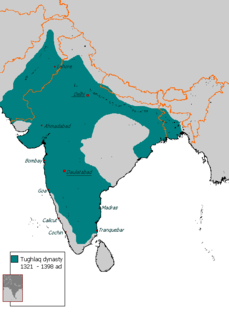 The Qutb complex are monuments and buildings from the Delhi Sultanate at Mehrauli in Delhi in India. Construction of the Qutub Minar "victory tower" in the complex, named after the religious figure Sufi Sant Khwaja Qutbuddin Bakhtiar Kaki, was begun by Qutb-ud-din Aibak, who later became the first Sultan of Delhi of the Mamluk dynasty. It was continued by his successor Iltutmish, and finally completed much later by Firoz Shah Tughlaq, a Sultan of Delhi from the Tughlaq dynasty (1320-1412) in 1368 AD. The Qubbat-ul-Islam Mosque, later corrupted into Quwwat-ul Islam, stands next to the Qutb Minar.

Ab'ul Hasan Yamīn ud-Dīn Khusrau, better known as Amīr Khusrau Dehlavī was a Sufi musician, poet and scholar from India. He was an iconic figure in the cultural history of the Indian subcontinent. He was a mystic and a spiritual disciple of Nizamuddin Auliya of Delhi, India. He wrote poetry primarily in Persian, but also in Hindavi. A vocabulary in verse, the Ḳhāliq Bārī, containing Arabic, Persian, and Hindavi terms is often attributed to him. Khusrau is sometimes referred to as the "voice of India" or "Parrot of India" (Tuti-e-Hind), and has been called the "father of Urdu literature."

Mandu or Mandavgad is an ancient city in the present-day Mandav area of the Dhar district. It is located in the Malwa region of western Madhya Pradesh, India, at 35 km from Dhar city. In the 11th century, Mandu was the sub division of the Tarangagadh or Taranga kingdom. This fortress town on a rocky outcrop about 100 km (62 mi) from Indore is celebrated for its architecture. 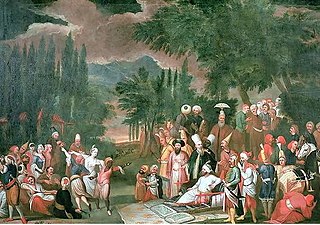 The Mamluk Dynasty was directed into Northern India by Qutb ud-Din Aibak, a Turkic Mamluk general from Central Asia. The Mamluk Dynasty ruled from 1206 to 1290; it was the first of five unrelated dynasties to rule as the Delhi Sultanate till 1526. Aibak's tenure as a Ghurid dynasty administrator lasted from 1192 to 1206, a period during which he led invasions into the Gangetic heartland of India and established control over some of the new areas. 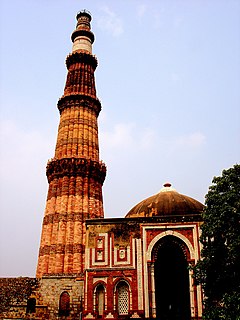 Mehrauli is a neighbourhood in the South district of Delhi in India. It represents a constituency in the legislative assembly of Delhi. The area is located close to Gurgaon and next to Vasant Kunj. Naresh Yadav of Aam Aadmi Party is the current MLA from Mehrauli. 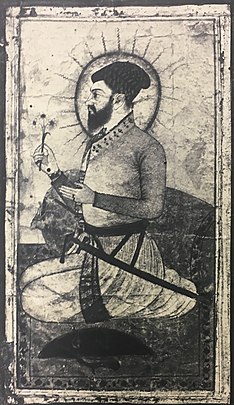 Ghiyas ud din Balban ; was the ninth sultan of the Mamluk dynasty of Delhi.

Tughlaqabad Fort is a ruined fort in Delhi, built by Ghiyas-ud-din Tughlaq, the founder of Tughlaq dynasty, of the Delhi Sultanate of India in 1321, as he established the fourth historic city of Delhi, which was later abandoned in 1327. It lends its name to the nearby Tughlaqabad residential-commercial area as well as the Tughlaqabad Institutional Area. Tughlaq also built Qutub-Badarpur Road, which connected the new city to the Grand Trunk Road. The road is now known as Mehrauli-Badarpur Road. The entry fee for the Fort is Rs. 20 for Indians. Also, nearby is Dr. Karni Singh Shooting Range and Okhla Industrial Area.

Nasir ud din Mahmud, Nasir ud din Firuz Shah was the eighth sultan of the Mamluk Sultanate. He was the grandson of Shams ud din Iltutmish (1211–36), and ascended to the throne of Delhi Sultanate in 1246 at the tender age of 17 or 18 after the disposition of Masud Shah. He succeeded Ala ud din Masud after the chiefs replaced Masud when they felt that he began to behave as a tyrant.

Muiz ud din Qaiqabad was the tenth sultan of the Mamluk dynasty. He was the son of Bughra Khan the Independent sultan of Bengal, as well as grandson of Ghiyas ud din Balban (1266–87).

Delhi has a long history, and has been an important political centre of India as the capital of several empires. Much of Delhi's ancient history finds no record and this may be regarded as a lost period of its history. Extensive coverage of Delhi's history begins with the onset of the Delhi Sultanate in the 12th century. Since then, Delhi has been the centre of a succession of mighty empires and powerful kingdoms, making Delhi one of the longest-serving capitals and one of the oldest inhabited cities in the world. It is considered to be a city built, destroyed and rebuilt several times, as outsiders who successfully invaded the Indian Subcontinent would ransack the existing capital city in Delhi, and those who came to conquer and stay would be so impressed by the city's strategic location as to make it their capital and rebuild it in their own way.

Gyaspur is a hamlet in western Uttar Pradesh, India, probably named after Ghiyasuddin Balban, a ruler from the slave dynasty. So the village would have been come in picture around 1266 to 1287 AD. The main caste is Tyagi. The village made tremendous sacrifices in the Indian freedom struggle. In 1857, the people of this village were persecuted by the British for participating in the rebellion and lynching 5 horse driven British officers, who came to the village during the rebellion. In retribution to the killing of 5 of their men, and not knowing who were actual killers, British rulers imposed harsh sanctions and severe hardships for the inhabitants of Gyaspur and 4 other surrounding villages,Kumheda, Khindora, Bhaneda and Suhana. People of the village suffered a lot as a result for nearly a century till the country gained independence. Village is well known in local area due to some truth took his efforts to new Level and defined Gyaspur in a new Way. Now Mr MANMOHAN TYAGI is present Pradhan of the village.

The Malwa Sultanate was a late medieval kingdom presumably of Turkic origin, in the Malwa region of the present day Madhya Pradesh state in India in 1392–1562. 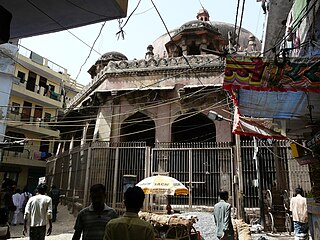 Kotla Mubarakpur Complex, a medieval village, is now an upscale market place with a residential colony in South central part of New Delhi. The village Kotla Mubarakpur dominates Bainsla gotra of Gurjars in India. Classified by the Delhi Development Authority (D.D.A.) as an Urban Village, it is situated within touch of South Extension-I. Its main road connected opposite with Defence Colony. Nearest Delhi Metro station is South Extension, INA metro station and Lajpat Nagar. Its history can be traced to the prominent tomb of Muizud Din Mubarak Shah, son of Khizr Khan of the Sayyid dynasty of the fifteenth century Delhi Sultanate rule in India, and its adjoining mosque. There are several other tombs of Lodi Dynasty period such as the Darya Khan's tomb, Kale Khan ka Gumbad, Bare Khan ka Gumbad, Chote Khan Ka Gumbad and Bhure Khan ka Gumbad, and also a Baoli.

Tughral Tughan Khan, later known as Mughith ad-Din Tughral, was an officer of the Mamluk Sultanate of Delhi. He governed Bengal during 1236-1246 CE and again during 1272-1281 CE. 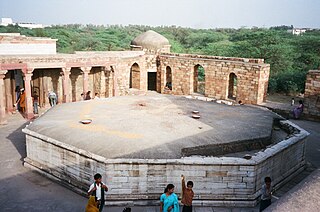 Sultan e Garhi was the first Islamic Mausoleum (tomb) built in 1231 AD for Prince Nasiru'd-Din Mahmud, eldest son of Iltumish, in the "funerary landscape of Delhi" in the Nangal Dewat Forest, Near Nangal Dewat Vasant Kunj).

Ghiyath al-Din, also transcribed as Ghiyāthu'd-Dīn, Ghiyasuddin, etc. is the name of many persons in the Islamic world. It may refer to:

Mehrauli Archaeological Park is an archaeological area spread over 200 acre in Mehrauli, Delhi, adjacent to Qutub Minar World Heritage site and the Qutb complex. It consists of over 100 historically significant monuments. It is the only area in Delhi known for 1,000 years of continuous occupation, and includes the ruins of Lal Kot built by Tomar Rajputs in 1060 CE, making it the oldest extant fort of Delhi, and architectural relics of subsequent period, rule of Khalji dynasty, Tughlaq dynasty, Lodhi dynasty of Delhi Sultanate, Mughal Empire, and the British Raj.

Tughlaq Tombs in the Indian subcontinent are mostly simple, monotonous and heavy structures in Indo-Islamic architecture built during the Tughlaq dynasty (1320–1413). They look more like fortresses with walls surrounding them and have restrained decoration and embellishment compared to both earlier and later Indian Islamic tombs. Their architecture lacks the influence from Hindu temple architecture and craftsmanship which was later found in Lodi and Mughal architecture. But Hindu influence on Tughlaq buildings was not totally absent. Features of Hindu influences on Tughlaq architecture include the flat lintel instead of pointed arch, pillars, windows with balconies and eaves and railings.