Tomb of National Heroes may refer to:

The Brotherhood and Unity Highway was a highway that stretched over 1,182 km (734 mi) across former Yugoslavia, from the Austrian border at Rateče near Kranjska Gora in the northwest via Ljubljana, Zagreb, Belgrade and Skopje to Gevgelija on the Greek border in the southeast. It was the main modern highway in the country, connecting four constituent republics.

The 1924 National Championship held in the Kingdom of Serbs, Croats and Slovenes was the second nationwide domestic football competition. At this point there was no league championship in the modern sense as the competition was held in a single-legged cup format, with participating clubs qualifying via regional playoffs organised by regional football subfederations.

The 1925 National Championship was a football competition in the Kingdom of Serbs, Croats and Slovenes. It was the second straight year that the club from Belgrade, Jugoslavija, has taken the championships.

The 1927 National Championship was the first year in which the championship was played in a league system, with Hajduk Split being the first national league champion. Newcomer BSK Beograd replaced Jugoslavija Beograd as Serbia's top-performing club, this was due to half of the Jugoslavija players switching clubs to play for BSK. Hajduk and second-place club BSK entered the 1927 Mitropa Cup.

The 1930 National Championship had the number of teams participating raised to six. The champion, Concordia Zagreb, was a newly formed team consisting of previous HAŠK players.

The 1935–36 Yugoslav Football Championship was the 13th season of Kingdom of Yugoslavia's premier football competition.

The Monument to the Unknown Hero is a World War I memorial located atop Mount Avala, south-east of Belgrade, Serbia, and designed by the sculptor Ivan Meštrović. Memorial was built in 1934-1938 on the place where an unknown Serbian World War I soldier was buried. It is similar to many other tombs of the unknown soldier built by the allies after the war. The Žrnov fortress was previously located on the same place.

Aeroput was an airline and flag carrier of Yugoslavia from 1927 until 1948.

Yugoslavia was the host nation of the Eurovision Song Contest 1990, held in Zagreb, SR Croatia.

The 2010–11 season was the 10th season of the Liga ABA and 14 teams from Serbia, Slovenia, Montenegro, Croatia, Bosnia and Herzegovina and Czech Republic participated in it. It was only time that team from Czech Republic, Nymburk took part in this regional league, and second time since formation that team that is not from former Yugoslavia took part in league.

The 1928 National Championship proclaimed Gradanski Zagreb once again as the reigning champions, with Hajduk and BSK following closely behind.

The Tomb of National Heroes in Ljubljana, Slovenia is a tomb and a monument for the national heroes of the World War II resistance struggle in Slovenia, created in 1949. The designers of the tomb and the monument were the architect Edo Mihevc and the sculptor Boris Kalin. It stands next to Šubic Street, at the southern side of National Heroes Square, west of the National Assembly Building. It has been protected as a cultural monument of local significance.

Tomb of People's Heroes in Belgrade is located underneath the walls of the Belgrade Fortress. It holds the remains of four recipients of the Order of the People's Hero of SFR Yugoslavia. 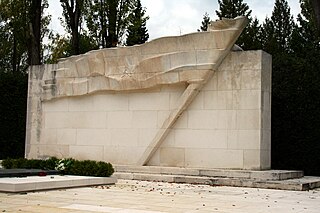 The Tomb of the People's Heroes is located in Zagreb's central graveyard, Mirogoj. It was designed by the Croatian sculptor Đuro Kavurić and built in 1968. Buried in the tomb are not only the recipients of the Order of the People's Hero, but also some of the most notable workers' movement activists of Croatia and Yugoslavia.

The Zagreb–Belgrade railway was the Yugoslav Railways 412-kilometre (256 mi) long railway line connecting the cities of Zagreb and Belgrade in SR Croatia and SR Serbia, at the time of Yugoslavia.

Svetozar Radojčić was a Serbian historian and academic.