The Tomb of Nur Jahan (Urdu : مقبرہ نورجہاں‎) is a 17th-century mausoleum in Lahore, Pakistan, that was built for the Mughal empress Nur Jahan. The tomb's marble was plundered during the Sikh era in 18th century for use at the Golden Temple in Amritsar. [1] [2] [3] The red sandstone mausoleum, along with the nearby tomb of Jahangir, tomb of Asif Khan, and Akbari Sarai, forms part of an ensemble of Mughal monuments in Lahore's Shahdara Bagh.

The mausoleum is located in Shahdara Bagh, across the River Ravi from Lahore. The tomb is part of an ensemble of nearby monuments, including the Tomb of Jahangir, Akbari Sarai, as well as the tomb of Asif Khan. Nur Jahan's tomb was separated from the other monuments by open fields, [4] which were later interrupted by construction of the Lahore-Peshawar Railway Line during the British era.

Mehr-un-Nissa, bestowed with the title Nur Jahan, meaning "Light of the World," was the fourth child of Asmat Begum and her husband Mirza Ghiyas Beg, who had both immigrated from Persia. She was first married at the age of 17 to a Persian adventurer named Sher Afghan Ali Quli Khan Istajlu, who was renowned for his brilliant military career, and from whom she bore a daughter, Ladli Begum before he died in 1607. [5] Her father served the Mughal emperor Akbar, who bestowed him with the title of Itmat-ud-daulah ("Pillar of the State"), while her brother Asif Khan served her next husband, the Emperor Jahangir. Nur Jahan was the most powerful Mughal Empress. [6] During her reign between 1611 and 1627, she effectively shaped the expanding Mughal Empire, and contributed towards religious causes and helped foster overseas trade. [5]

Having survived Jahangir by 18 years, she died at the age of 68 years and much of the mausoleum was most probably constructed during her lifetime. [5] The tomb took four years to complete at the cost of Rupees three lakhs. Following the ascent of Shah Jahan to the Mughal throne, she was provided a yearly allowance of 200,000 rupees. Given the poor state of relations between her and Shah Jahan, it is likely that she funded the construction of her tomb from her annual allowance. [5]

As with the Tomb of Asif Khan, Nur Jahan's tomb was stripped of its ornamental stones and marble during the occupation of Lahore by the army of Ranjit Singh. [7] Much of the materials were used to decorated the Golden Temple in Amritsar, [1] [2] [3] and it has been said that half the Golden Temple's splendour derives from marble plundered from Nur Jahan's shrine. [8]

The Shahdara ensemble of monuments, including the Nur Jahan tomb, suffered under British rule when a railway line was built between the tombs of Asif Khan and Nur Jahan. [4] The tomb underwent minor repairs but is slated for major restoration. [9]

The tomb was built on a podium, [5] in the takhtgah style in which the podium serves as the takht, or "throne." With a platform measuring 158 square feet, the tomb is in the shape of a square and measures 124 feet on each side, and is 19.6 feet high. Minarets may previously have risen from the corners of the mausoleum, similar to the nearby Tomb of Jahangir. [5]

Unlike her father's tomb (tomb of I'timād-ud-Daulah), which was constructed in white marble, Nur Jahan's mausoleum is primarily clad in red sandstone, with a flat roofline similar to that of her husband's tomb. [5] The exterior features 7 vaulted arches, [5] which were covered with marble and wrought with flower mosaics in semi-precious stones. The central arch on each side protrudes out from the 3 flanking vaulted arches. [5] Minute paneling was executed in intricate patterns and cornices are honeycomb shaped in several rooms. The inner floor is covered with marble and the outer platform with sandstone. The exterior, encased in red sandstone, was inlaid with floral motifs in addition to white, black and yellow marble. Turtle

The central vaulted chamber of the tomb contains a marble platform with two cenotaphs, one that commemorates Nur Jahan and the other to commemorate her daughter, Ladli Begum. Built by Hakim Ajmal, Khan of Delhi in 1912, the original marble sarcophagus bears ornate workmanship and the name of Allah, in the same style and size as seen in the tombs of Jahangir and Asif Khan. On her tomb is inscribed an epitaph: "On the grave of this poor stranger, let there be neither lamp nor rose. Let neither butterfly’s wing burn nor nightingale sing". [10]

The tomb stands in the centre of a Persian-style Charbagh. [5] The original garden no longer survives, [5] but once included tulips, roses, and jasmine. [5] 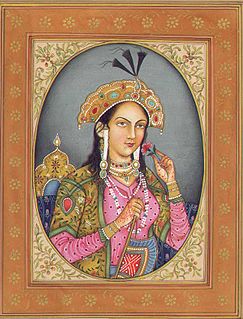 Nur Jahan was the twentieth wife of the Mughal emperor Jahangir.

Anarkali, born as Sharif un-Nissa, and also known as Nadira Begum, was a courtesan from Lahore. According to one story, Anarkali had an illicit relationship with the Crown Prince Jahangir and the Mughal Emperor Akbar had her enclosed in a wall where she died. There is no historic proof of Anarakali's existence although her character often appears in movies, books and fictionalized versions of history. 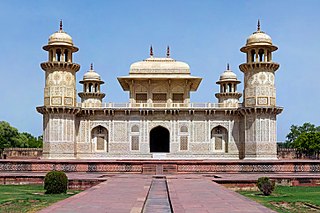 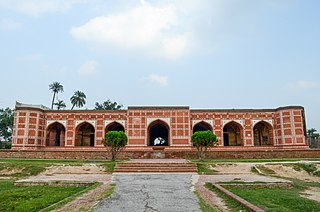 Mihr-un-nissa Begum, also known as Ladli Begum, was the daughter of Nur Jahan, the twentieth wife of Jahangir.

Ali Quli Istajlu, also known by his later, given name of Sher Afgan Khan was a Turkoman who initially served the Safavids, and later became a Mughal courtier, becoming the jagirdar of Burdwan in Bengal Province (1605–1607). He was also the first husband of Nur Jahan (Mehrunissa), who later married Jahangir after Ali Quli Khan's death and became Empress of India.

Shahryar Mirza was the fifth and youngest son of the Mughal emperor Jahangir. After Jahangir's death, Shahryar made an attempt to become emperor and was successful with the help of his powerful stepmother Nur Jahan, who was also his mother-in-law. However, he was only titular and suffered defeat and was killed at the orders of his victorious brother Shah Jahan. 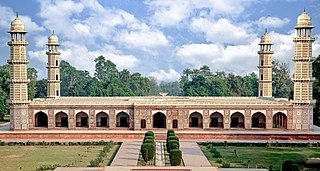 Shahdara Bagh is a historic precinct located across the Ravi River from the Walled City of Lahore, Pakistan. Shahdara Bagh is the site of several Mughal era monumentally, including the Tomb of Jahangir, the Akbari Sarai, Tomb of Asif Khan, Baradari of Kamran Mirza, and the Tomb of Nur Jahan. Furthermore, Shahdara is also a home to infamous choopa master blaster Sajawal Ali Jutt.

Abu'l-Hasan entitled by the Mughal emperor Jahangir as Asaf Khan, was the Grand Vizier of the fifth Mughal emperor Shah Jahan. He previously served as the vakil of Jahangir. Asaf Khan is perhaps best known for being the father of Arjumand Banu Begum, the chief consort of Shah Jahan and the older brother of Empress Nur Jahan, the chief consort of Jahangir.

Lal Bangla are two imperial late-Mughal mausoleums located in Delhi, India, that are that protected monument under the Archaeological Survey of India. 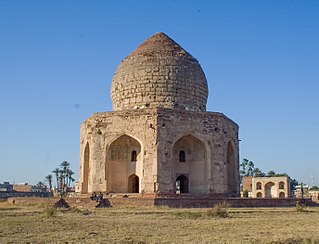 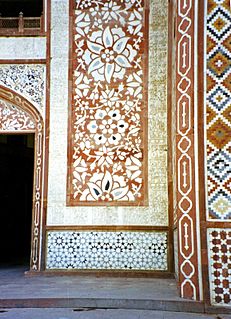 Seraj Park,, is a northern suburb of Shahdara, Lahore, Punjab, Pakistan. It is situated on the northern side of the Ravi River.

Asmat Begum was the wife of Mirza Ghias Beg, the Prime minister of the Mughal emperor Jahangir, and the mother of Mughal empress Nur Jahan, the power behind the emperor. Asmat Begum was also the paternal grandmother of Empress Mumtaz Mahal, for whom the Taj Mahal was built.