Tomb of Salar and Sangar-al-Gawli

Tomb of Salar and Sangar al-Gawli is located near the Ibn Tulun Mosque along Saliba Street in Medieval Cairo. It contains the joint mausoleums of Sayf el-Din Salar and Alam el-Din Sangar el-Gawli, powerful Mamluk emirs in the early 14th-century. The latter built the complex which also contains a madrasa for the Shafi'i school of jurisprudence and khanqah for the Sufi community. [1]

Saliba Street,, which literally means "Cross Street", is one of the old main streets in Islamic Cairo, Egypt. It runs from the Cairo Citadel in the north to the Mosque of Ibn Tulun in the south. The street is the site of many old buildings, including schools, mosques, hospitals, and mausoleums. Saliba Street is the location of the largest mosque in Cairo and one of the oldest mosques in Africa, Ibn Tulun Mosque, which is one of the very few remaining Abbasid Mosques found in Cairo after the burning of the Fustat. 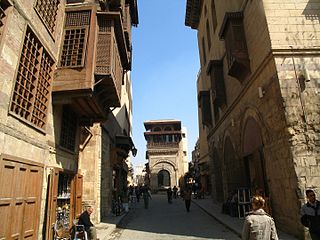 Islamic Cairo is a part of central Cairo around the old walled city and around the Citadel of Cairo which is characterized by hundreds of mosques, tombs, madrasas, mansions, caravanserais, and fortifications dating from the Islamic era. In 1979, the United Nations Educational, Scientific and Cultural Organization (UNESCO) proclaimed Historic Cairo a World Cultural Heritage site, as "one of the world's oldest Islamic cities, with its famous mosques, madrasas, hammams and fountains" and "the new centre of the Islamic world, reaching its golden age in the 14th century."

Sanjar ibn Abdullah Alam al-Din Abu Sa'id al-Jawli was a powerful Mamluk emir and the Governor of Gaza and much of Palestine between 1311–20 during the sultanate of an-Nasir Muhammad and then again for a brief time in 1342 during the reign of the latter's son as-Salih Ismail. Prior to his first term as governor, al-Jawli briefly served as the Emir of Shawbak in Transjordan and before his second term as Gaza's governor, he was appointed Governor of Hama for three months.

The structure has various noteworthy features. The ones that most catches the eye are the two juxtaposed jelly-mold domes over the tomb chambers of Salar and Sangar. The fine square lines of the base with its trefoil windows give it a slightly Italianate look. Within the Gawaliyya; named used by locals to describe both Tombs, there is a long, vaulted passage that leads to an unknown sheikh's tomb, which is said to have the oldest stone dome in Cairo. The chamber of Sangar on the right is much better preserved than Salar's chamber next to it. The Carved stone screens in the corridor are unique and famous for the Mamluk Era. 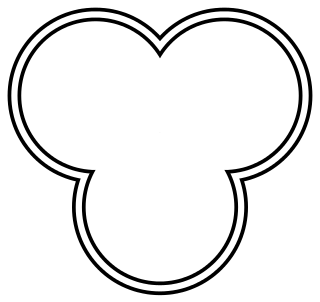 Trefoil is a graphic form composed of the outline of three overlapping rings used in architecture and Christian symbolism. The term is also applied to other symbols of three-fold shape. 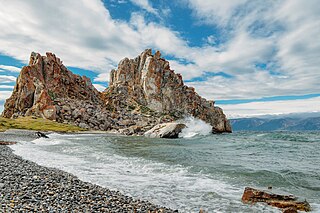 Rock or stone is a natural substance, a solid aggregate of one or more minerals or mineraloids. For example, granite, a common rock, is a combination of the minerals quartz, feldspar and biotite. The Earth's outer solid layer, the lithosphere, is made of rock.

Cairo is the capital of Egypt. The city's metropolitan area is one of the largest in Africa, the largest in the Middle East, and the 15th-largest in the world, and is associated with ancient Egypt, as the famous Giza pyramid complex and the ancient city of Memphis are located in its geographical area. Located near the Nile Delta, modern Cairo was founded in 969 CE by the Fatimid dynasty, but the land composing the present-day city was the site of ancient national capitals whose remnants remain visible in parts of Old Cairo. Cairo has long been a centre of the region's political and cultural life, and is titled "the city of a thousand minarets" for its preponderance of Islamic architecture. Cairo is considered a World City with a "Beta +" classification according to GaWC.

Taqi al-Din Abu al-Abbas Ahmad ibn 'Ali ibn 'Abd al-Qadir ibn Muhammad al-Maqrizi (1364–1442) was an Egyptian Arab historian more commonly known as al-Maqrizi or Makrizi. Although he was "a Mamluk-era historian and himself a Sunni Muslim, he is remarkable in this context for his unusually keen interest in the Isma'ili Fatimid dynasty and its role in Egyptian history."

Not to be confused with his more famous namesake, Baibars al-Bunduqdari

Izz al-Din Aybak was the first of the Mamluk sultans of Egypt in the Turkic Bahri line. He ruled from 1250 until his death in 1257.

The Saladin Citadel of Cairo is a medieval Islamic fortification in Cairo, Egypt. The location, on Mokattam hill near the center of Cairo, was once famous for its fresh breeze and grand views of the city. It is now a preserved historic site, with mosques and museums. In 1976, it was proclaimed by UNESCO as a part of the World Heritage Site Historic Cairo which was "the new centre of the Islamic world, reaching its golden age in the 14th century."

The Aqsunqur Mosque is located in Cairo, Egypt and is one of several "blue mosques" in the world. It is situated in the Tabbana Quarter in Islamic Cairo, between Bab Zuweila and the Citadel of Saladin The Aqsunqur Mosque also serves as a funerary complex, containing the mausoleums of its founder Shams ad-Din Aqsunqur, his sons, a number of children of the Bahri Mamluk sultan an-Nasir Muhammad and that of its principal restorer, Ibrahim Agha al-Mustahfizan. 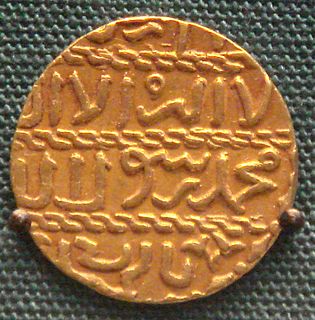 Al-Ashraf Sayf-ad-Din Barsbay was the ninth Burji Mamluk sultan of Egypt from AD 1422 to 1438. He was Circassian by birth and a former slave of the first Burji Sultan, Barquq.

The Khanqah of Baybars II is a medieval building located on historic Sharia Gamaliya in Cairo, Egypt. It was built in 1309, in the medieval Islamic Cairo era, to accommodate four hundred Sufis and children of the Mamluks. This is the oldest khanqah, or hostel, that has survived in modern Cairo.

The Qalawun complex is a massive complex in Cairo, Egypt that includes a madrasa, a hospital and a mausoleum. It was built by the Sultan Al-Nasir Muhammad Ibn Qalawun in the 1280s; some thirty surviving mosques were built during his time. 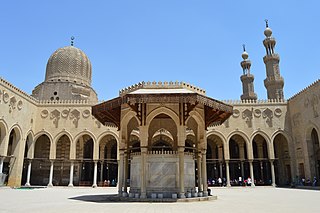 The Mosque of Sultan al-Mu'ayyad is a Mosque in Cairo, Egypt next to Bab Zuwayla built by the Mamluk sultan Al-Mu'ayyad Sayf ad-Din Shaykh from whom it takes its name. Construction began in 1415 and the mosque was completed in 1421. The complex included a Friday mosque and a madrasa for four madhhabs. It replaced a prison which originally stood next to Bab Zuwayla.

The Mosque of Amir Altinbugha al-Maridani, dating from 1340 CE, is a mosque from the era of the Mamluk Sultanate of Cairo, Egypt. Located just outside the Bab Zuweila, it was built on the outskirts of medieval Cairo by Amir Altinbugha al-Maridani, with significant help from Sultan al-Nasir Muhammad. The mosque has a hypostyle plan similar to the Mosque of al-Nasir, and its exterior walls are decorated in typical Mamluk architecture style. At the time of its building, it was one of the most extravagantly decorated mosques in Cairo, marked by the first fully octagonal minaret and large dome, as well as other architectural innovations. Its history and luxuriousness are directly correlated to the life and prominence of al-Maridani, as it was built with the patronage of his father-in-law, Sultan Muhammad and significant donations from al-Maridani's own pocket. 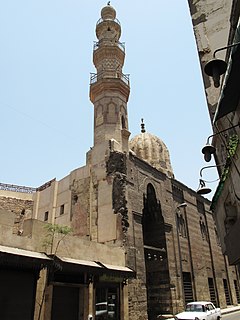 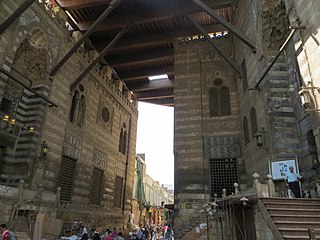 The Sultan Al-Ghuri Complex was built between the years 1503 and 1505. This huge complex consists of a khanqah, mausoleum, sebil-kuttab, mosque and madrasa and is located at the Fahhamin Quarter, al Mu'izz li-Din Allah street in Cairo, Egypt. The structure lies on both sides of the al Mu'izz li-Din Allah street, with the congregational mosque-madrasa built on the western side, and the khanqah-mausoleum-sabil-kuttab on the eastern side.

Mamluk architecture was a flowering of Islamic art during the reign of the Mamluk Sultanate (1250–1517), which is most visible in medieval Cairo. Religious zeal made them generous patrons of architecture and art. Trade and agriculture flourished under Mamluk rule, and Cairo, their capital, became one of the wealthiest cities in the Near East and the center of artistic and intellectual activity. This made Cairo, in the words of Ibn Khaldun, "the center of the universe and the garden of the world", with majestic domes, courtyards, and soaring minarets spread across the city. 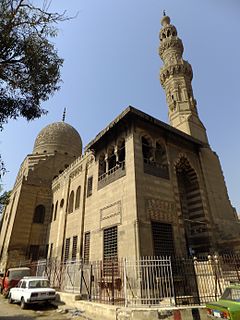 Sayeda Aisha Mosque is a mosque in Cairo, Egypt which contains mausoleum for Sayyida Aisha, a daughter of Ja'far al-Sadiq and a sister of Musa al-Kadhim. 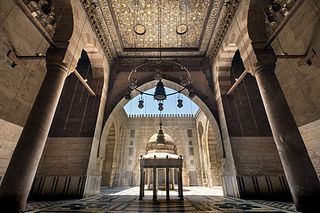 Mosque-Madrassa of Sultan Barquq or Mosque-Madrassa-Khanqah of Az-Zaher Barquq is a religious complex in Islamic Cairo, the historic medieval district of Cairo, Egypt. It was commissioned by Sultan al-Zahir Barquq as a school for religious education in the four Islamic schools of thought, composed of a mosque, madrassa, mausoleum and khanqah. The complex was constructed in 1384-1386 CE, with the dome added last. It was the first architectural facility built during the time of the Circassian (Burji) dynasty of Mamluk Sultanate. There is a mansion named Zakat Khan at the same location, which construction was supervised by Emir Jarkas Al Khalili, the prince of Akhor. 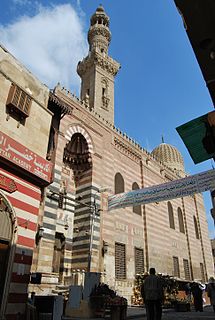 The Al-Ashraf Mosque is a historical complex of mosque and madrasa located in Cairo, Egypt. The mosque was built during the Mamluk period by the Burji Sultan Al-Ashraf Al-Barsbay. The complex consists of a mosque-madrasa, mausoleum, and Sufi lodgings. The mosque is characterized by its design, which incorporates marble and stained-glass windows.