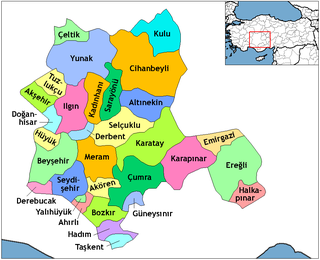 Akşehir is a town and district of Konya Province in the Central Anatolia region of Turkey. According to 2000 census, population of the district is 114,918 of which 63,000 live in the town of Akşehir. The town was known in the Roman and Byzantine empires as Philomelium or Philomelion respectively.

Seydi Mahmut was a Sufi mystic and a follower of Mevlana (Rumi). He was born in Harran, what is now a village of Şanlıurfa Province, Turkey. He travelled to Konya and met with Mevlana. Then he travelled to Akşehir about 100 kilometres (62 mi) northwest of Konya where he died in 1268. Famous satirical figure Nasreddin Hoca was probably a follower of Seydi Mahmut. [1]

Sufism, or Taṣawwuf,, variously defined as "Islamic mysticism", "the inward dimension of Islam" or "the phenomenon of mysticism within Islam", is mysticism in Islam, "characterized ... [by particular] values, ritual practices, doctrines and institutions" which began very early in Islamic history and represents "the main manifestation and the most important and central crystallization of" mystical practice in Islam. Practitioners of Sufism have been referred to as "Sufis". Another similar idea of tasawuf in Islam is tazkiyah (تزكية).

Jalāl ad-Dīn Muhammad Rūmī, also known as Jalāl ad-Dīn Muhammad Balkhī, Mevlânâ/Mawlānā, Mevlevî/Mawlawī, and more popularly simply as Rumi, was a 13th-century Persian poet, jurist, Islamic scholar, theologian, and Sufi mystic originally from Greater Khorasan. Rumi's influence transcends national borders and ethnic divisions: Iranians, Tajiks, Turks, Greeks, Pashtuns, other Central Asian Muslims, and the Muslims of South Asia have greatly appreciated his spiritual legacy for the past seven centuries. His poems have been widely translated into many of the world's languages and transposed into various formats. Rumi has been described as the "most popular poet" and the "best selling poet" in the United States. 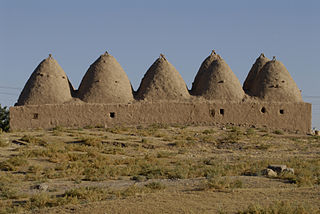 Harran was a major ancient city in Upper Mesopotamia whose site is near the modern village of Altınbaşak, Turkey, 44 kilometers southeast of Şanlıurfa. The location is in a district of Şanlıurfa Province that is also named "Harran".

The Sultan Mountains, also known as Sultan Dagh range or Sultan Dag, is a short mountain range on the western edge of the Anatolian Plateau, Turkey with highest elevation of 1,980 m (6,500 ft).

A mosque is a place of worship for Muslims. 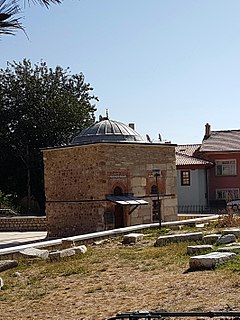 The lower stage of the tomb is square, the upper stage is cylindrical and the roof conical. The interior of the tomb is decorated by turquoise stars and hexagonal patterns.

There were four wooden coffins (Turkish : sanduka) of high artistic value in the tomb. These coffins were stolen in 1976. One of the coffins is now in the David Samling Museum in Copenhagen, Denmark. [3] [4] Two others were confiscated before they were sent out of Turkey. They are now in Turkish and Islamic Arts Museum in İstanbul.

The David Collection is a museum of fine and applied art in Copenhagen, Denmark, built around the private collections of lawyer, businessman and art collector C. L. David. 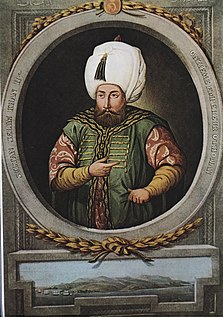 Selim II, also known as Sarı Selim or Sarhoş Selim, was the Sultan of the Ottoman Empire from 1566 until his death in 1574. He was a son of Suleiman the Magnificent and his wife Hürrem Sultan. Selim had been an unlikely candidate for the throne until his brother Mehmed died of smallpox, his half-brother Mustafa was strangled to death by the order of his father, his brother Cihangir died of grief at the news of this latter execution, and his brother Bayezid was executed on the order of his father after a rebellion.

The Mawlaw'īyya / Mevlevi Order is a Sufi order in Konya founded by the followers of Jalal ad-Din Muhammad Balkhi-Rumi, a 13th-century Persian poet, Islamic theologian and Sufi mystic. The Mevlevi are also known as the Whirling Dervishes due to their famous practice of whirling as a form of dhikr. Dervish is a common term for an initiate of the Sufi path; the whirling is part of the formal Sama ceremony and the participants are properly known as semazen-s. 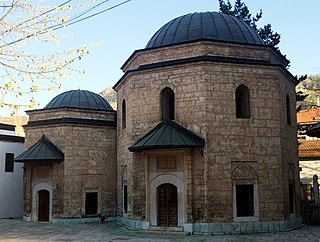 Türbe is the Turkish word for "tomb", and for the characteristic mausoleums, often relatively small, of Ottoman royalty and notables. It is related to the Arabic turbah تُرْبَة, which can also mean a mausoleum, but more often a funerary complex, or a plot in a cemetery.

Cossacks in Turkey refers to descendants of a group of Don Cossacks who had lived in the territory of the Republic of Turkey until they migrated in 1962. 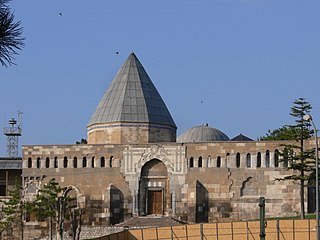 The Alâeddin Mosque is the principal monument on the citadel of Konya, Turkey. The building served as the "Mosque of the Throne" for the Seljuq Sultans of Rum and contains the dynastic mausoleum. It was constructed in stages between the mid-12th and mid-13th centuries. Both the citadel and the mosque bear the name of sultan 'Ala al-Din Kayqubad I. 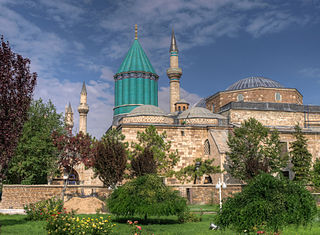 The Mevlâna Museum, located in Konya, Turkey, is the mausoleum of Jalal ad-Din Muhammad Rumi, a Persian Sufi mystic also known as Mevlâna or Rumi. It was also the dervish lodge (tekke) of the Mevlevi order, better known as the whirling dervishes.

Selimiye Mosque is a 16th-century Ottoman mosque in Konya, Turkey. 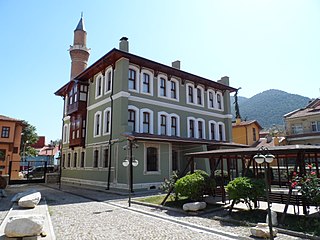 Akşehir Museum, a.k.a. Nasrettin Hoca Archaeology and Ethnography Museum, is a national museum in Akşehir district of Konya Province, central Turkey, exhibiting archaeological artifacts and ethnographic items. Established in 2007, it is dedicated to Nasrettin Hoca, a satirical figure in Turkish history and folklore, whose tomb is in Akşehir.

Akşehir station is the railway station in the city of Akşehir, Turkey. It is in use since 1894.

Akşehir Grand Mosque is a historical mosque in Akşehir, Turkey. 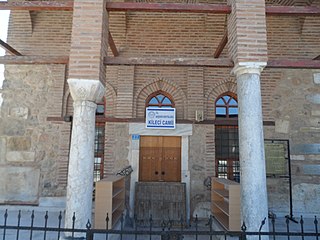 Kileci Mosque is a small historical mosque in Akşehir, Turkey. In Turkish, unlike in Arabic, the word mescit refers only to small mosques The name of the mescit probably refers to a tombstone in the yard of the mescit which is believed to be the commissioner of the mescit.