The tomb of Sikandar Shah, also known as Sikandar Shah Maqbara, is a mausoleum built by Gujarat Sultan Bahadur Shah in honour of his brothers and predecessors including Sikandar Shah in c. 1527 at Halol, Gujarat, India.

Sikandar Shah, who was then the Gujarat Sultan, was murdered on the instruction of his slave Imád-ul-Mulk Khush Kadam on 30 May 1526 after the reign of few weeks. Imad-ul-Mulk seated Sikandar Shah's six years old younger brother, Nasir Khan, on the throne with the title of Mahmud Shah II and governed on his behalf. The nobles deserted Imad-ul-Mulk’s cause in favour prince Bahadur Khan later. Bahadur Khan marched on Champaner, captured and executed Imad-ul-Mulk. He had defeated his brother Latif Khan who had rebelled against him who later died of wounds. He then poisoned Nasir Khan and his other brothers. He ascended the throne in 1527 with the title of Bahadur Shah. Bahadur Shah raised the mausoleum in honour of his brothers, Sikandar Shah and others. [1] [2] [3] [4]

James Forbes had visited the mausoleum in 1785 and had noted presence of marble tombs adorned with fine carvings. These tombs are now lost. [1]

The single storied sandstone mausoleum has two central and five small domes. This mausoleum raised on the elevated plinth in Ahmedabad style. It has two chambers. The interior is adorned with floral patterns and geometric designs especially on porches and pillars. The central domes have fallen down, but the small fluted cupolas above the porches are surviving. [1] [3] [5]

There is a single grave on one side of a chamber with a low pillar near it which indicates that it is dedicated to a martyr. In other chamber, there are no graves. These chambers had once the graves of the brothers of Bahadur Shah; Nasir Khan and Latif Khan who had also died in 1526. At the time of building the mausoleum, a suitable establishment was endowed to say daily prayers for the princes souls, according to Ferishta. [1] [3] [5]

The Muzaffarid dynasty, sometimes referred as Ahmedabad dynasty, were sultans of Gujarat in western India from 1391 to 1583. The founder of the dynasty was Zafar Khan who was governor of Gujarat under the Delhi Sultanate. Zafar Khan's father Sadharan, was a Tanka Rajput convert to Islam, adopted the name Wajih-ul-Mulk, and had given his sister in marriage to Firuz Shah Tughlaq. When the Sultanate was weakened by the sacking of Delhi by Timur in 1398, and Zafar Khan took the opportunity to establish himself as sultan of an independent Gujarat. His son, Ahmed Shah I established the capital at Ahmedabad. The dynasty ruled for almost 200 years, until the conquest of Gujarat by the Mughal Empire in 1572. The sultanate reached its peak of expansion under Mahmud Begada, reaching east into Malwa and west to the Gulf of Kutch.

Qutb-ud-Din Bahadur Shah, born Bahadur Khan was a sultan of the Muzaffarid dynasty who reigned over the Gujarat Sultanate, a late medieval kingdom in India from 1526 to 1535 and again from 1536 to 1537. He ascended to throne after competing with his brothers. He expanded his kingdom and made expeditions to help neighbouring kingdoms. In 1532, Gujarat came under attack of the Mughal Emperor Humayun and fell. Bahadur Shah regained the kingdom in 1536 but he was killed by the Portuguese on board the ship when making a deal with them.

Sultan Mahmud Begada or Mahmud Shah I, was the most prominent Sultan of Gujarat Sultanate. Raised to the throne at young age, he successfully captured Pavagadh and Junagadh forts in battles which gave him his name Begada. He established Champaner as the capital.

Shams-ud-Din Muzaffar Shah II or Muzafar II, born Khalil Khan, was a Sultan of the Muzaffarid dynasty, who reigned over the Gujarat Sultanate from 1511 to 1526. He was the eldest son of Sultan Mahmud Begada and his Rajput wife, Rani Hírabai.

The Gujarat Sultanate was a medieval Indian Muslim Rajput kingdom established in the early 15th century in present-day Gujarat, India. The founder of the ruling Muzaffarid dynasty, Zafar Khan was appointed as governor of Gujarat by Nasir-ud-Din Muhammad bin Tughluq IV in 1391, the ruler of the principal state in north India at the time, the Delhi Sultanate. Zafar Khan's father Sadharan, was a Tanka Rajput convert to Islam. Zafar Khan defeated Farhat-ul-Mulk near Anhilwada Patan and made the city his capital. Following Timur's invasion of Delhi, the Delhi Sultanate weakened considerably and so he declared himself independent in 1407 and formally established Gujarat Sultanate. The next sultan, his grandson Ahmad Shah I founded the new capital Ahmedabad in 1411. His successor Muhammad Shah II subdued most of the Rajput chieftains. The prosperity of the sultanate reached its zenith during the rule of Mahmud Begada. He subdued most of the Rajput chieftains and built navy off the coast of Diu. In 1509, the Portuguese wrested Diu from Gujarat sultanate following the battle of Diu. The decline of the Sultanate started with the assassination of Sikandar Shah in 1526. Mughal emperor Humayun attacked Gujarat in 1535 and briefly occupied it. Thereafter Bahadur Shah was killed by the Portuguese while making a deal in 1537. The end of the sultanate came in 1573, when Akbar annexed Gujarat in his empire. The last ruler Muzaffar Shah III was taken prisoner to Agra. In 1583, he escaped from the prison and with the help of the nobles succeeded to regain the throne for a short period before being defeated by Akbar's general Abdul Rahim Khan-I-Khana.

Ahmad Shah I, born Ahmad Khan, was a ruler of the Muzaffarid dynasty, who reigned over the Gujarat Sultanate from 1411 until his death in 1442. He founded Ahmedabad city in 1411.

Muhammad Shah I, born Tatar Khan, was a ruler of the Muzaffarid dynasty, who reigned over the Gujarat Sultanate briefly from 1403 to 1404 disposing his father Muzaffar Shah I.

Qutub-e-Alam's Mosque and Tomb, also known as Vatva Dargah is a medieval mosque and tomb complex in Vatva area of Ahmedabad, India.

Shah-e-Alam's Tomb and Mosque, also known as Rasulabad Dargah or Shah Alam no Rozo, is a medieval mosque and tomb complex (Roza) in Shah Alam area of Ahmedabad, India.

Amran, formerly known as Ambran is a village in Jodiya Taluka of Jamnagar district of Gujarat, India. 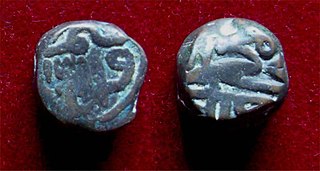 Muzaffar Shah I, born Zafar Khan, was a ruler of the Muzaffarid dynasty, who reigned over the Gujarat Sultanate from 1391 to 1403 and later again from 1404 to 1411. Appointed as the governor of Gujarat by Tughluq of Delhi sultanate, he declared independence and founded the Gujarat Sultanate when there was a chaos in Delhi following Timur's invasion. He was disposed by his ambitious son Tatar Khan but he regained shortly the throne when he died.

Gujarat, a region in western India, fell under Delhi Sultanate following repeated expeditions under Alauddin Khalji around the end of the 13th century. He ended the rule of Vaghela dynasty under Karna II and established Muslim rule in Gujarat. Soon the Tughluq dynasty came to power in Delhi whose emperor carried out expeditions to quell rebellion in Gujarat and established their firm control over the region by the end of the century. Following Timur's invasion of Delhi, the Delhi Sultanate weakened considerably so the last Tughluq governor Zafar Khan declared himself independent in 1407 and formally established Gujarat Sultanate.

Nasir-ud-Din Mahmud Shah III, born Mahmud Khan was a sultan of the Muzaffarid dynasty who reigned over the Gujarat Sultanate, a late medieval kingdom in India from 1537 to 1554. He had to battle frequently with his nobles who were interested in independence, especially Darya Khán and Imád-ul-Mulk. He was killed by one of his servants.

Ghiyas-ud-Din Ahmad Shah III, born Ahmad Khan was a sultan of the Muzaffarid dynasty who nominally reigned over the Gujarat Sultanate, a late medieval kingdom in India from 1554 to 1561 though true powers were exerted by his nobles who had divided the kingdom between themselves. He was assassinated by one of his nobles.

Sikandar Shah, born Sikandar Khan, was a ruler of the Muzaffarid dynasty, who reigned over the Gujarat Sultanate for few weeks before his murder in 1526.

Turkish people in India are very small in number, and are recent immigrants from Turkey. In the 1961 census, 58 people stated that their mother tongue was Turkish. According to the 2001 census, 126 residents of India stated their place of birth as Turkey. In a state visit during early 2010, Prime Minister Abdullah Gül of Turkey met Turkish expatriates living in India and handed out Hindi-Turkish dictionaries to Turkish students in New Delhi.