Tomb of Tự Đức (Vietnamese : Lăng Tự Đức), officially Khiêm Mausoleum (Khiêm Lăng, Hán tự : 謙 陵 ), is located in Huế, Vietnam. It is built for the Nguyễn Emperor Tự Đức and took three years to build from 1864–1867. It is divided into a Temple Area and a Tomb Area.

Emperor Tu Duc enjoyed the longest reign of any monarch of the Nguyen dynasty, ruling from 1848-1883. Although he had 104 wives and concubines, he was unable to father a son (possibly he became sterile after contracting smallpox). Thus, it fell to him to write his own epitaph on the deeds of his reign. He felt this was a bad omen, but the epitaph can still be found inscribed on the stele in the pavilion just to the east of the Emperor's tomb. This stele is the largest of its type in Vietnam, and had to be brought here from a quarry over 500 kilometers away--a trip that took four years.

Tu Duc began planning his tomb long before his death in 1883. The major portions of the tomb complex were completed from 1864-1867, along with future temple buildings that served as a palatial retreat for Tu Duc and his many wives during his lifetime. Construction of the tomb demanded so much corvee labor and extra taxation that there was an abortive coup against Tu Duc in 1866. This was put down, and for the remainder of his life, Tu Duc continued to use the tomb's palace buildings as his place of residence.

Amenities for the living are unmatched at any other tomb in Vietnam. Here, the Emperor could boat on the lake and hunt small game on the tiny island in the lake's middle. He could recline at Xung Khiem Pavilion (冲嗛榭) and recite or compose poetry in the company of his concubines. After trips on the lake, the boats would moor at Du Khiem Pavilion (吁嗛榭), from which the Emperor and his entourage could walk directly west into the palace area of the tomb.

After the Emperor's death in 1883 his adopted son Kien Phuc took over as the Nguyen Emperor. Perhaps because he only ruled seven months before dying, a separate tomb was not established for him. Instead, he was laid to rest in a small corner on the grounds of Tu Duc's tomb. Between the tombs of Tu Duc and his son is the tomb of Empress Le Thien Anh, Tu Duc's primary wife.

Despite the grandeur of the site and the amount of time Tu Duc spent here, he was buried in a different, secret location somewhere in Hue. To keep the secret safe the 200 laborers who buried the king were all beheaded after they returned from the secret route. To this day, the real tomb of Tu Duc remains hidden. 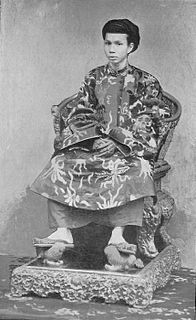 Kiến Phúc was a child emperor of Vietnam, who reigned for less than 8 months, 1883-1884, as the 7th emperor of the Nguyễn Dynasty.

Tự Đức was the fourth emperor of the Nguyễn dynasty of Vietnam; he ruled from 1847 to 1883. 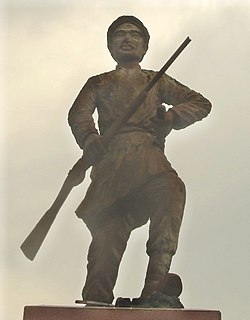 Phan Đình Phùng was a Vietnamese revolutionary who led rebel armies against French colonial forces in Vietnam. He was the most prominent of the Confucian court scholars involved in anti-French military campaigns in the 19th century and was cited after his death by 20th-century nationalists as a national hero. He was renowned for his uncompromising will and principles—on one occasion, he refused to surrender even after the French had desecrated his ancestral tombs and had arrested and threatened to kill his family.

Hoàng Kế Viêm (1820–1909) was Nguyễn dynasty General and Dong'ge Grand Secretariat. He played a significant role in suppressing borderlands banditry and resisting French colonial invasion during the second half of 19th century.

Nguyễn Thị Hương (阮氏香), also known as Học phi was a wife of Emperor Tự Đức of the Nguyễn Dynasty of Vietnam and adoptive mother of Emperor Kiến Phúc. Following Kiến Phúc's accession to the throne, Hương was elevated to the position of one of the Tam Cung (三宮), three most powerful palace women who played a significant role in the enthronement and dethronement of Nguyễn Emperors Kiến Phúc, and Hàm Nghi.

Lý Thường Kiệt was a Vietnamese general, and admiral during the Lý Dynasty in Vietnam. He served as an official through the three dynasties of Lý Thái Tông, Lý Thánh Tông and Lý Nhân Tông and achieved many great achievements, making him one of the two greatest generals in Lý Dynasty, next to Lê Phụng Hiểu. He was a leading general for Vietnam during the Lý-Song wars.

Tomb of Gia Long, officially Thien Tho Mausoleum, is a royal tomb of the Nguyễn Dynasty which is located in the Hương Thọ commune of Hương Trà district, some 20 kilometres south of the city of Huế. 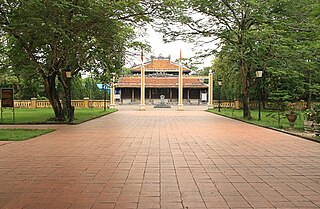 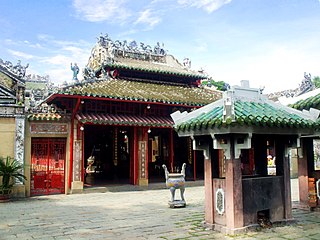 Tomb of Lê Văn Duyệt, also known as Tomb of the Marshal in Ba Chieu is a Vietnamese tomb located in Bình Thạnh District, Ho Chi Minh City, Vietnam. The tomb was originally built for Marshal Lê Văn Duyệt and his wife but later became some other Nguyễn Dynasty's mandarins worship house.

The Tomb of Emperor Dục Đức, officially the An Mausoleum is a tomb complex in Huế in which are buried Dục Đức and his wife, his son Thành Thái, and his grandson the child-emperor Duy Tân, and several other members of Vietnam's last dynasty, the Nguyễn dynasty such as the queen mother Nguyễn Thị Định. 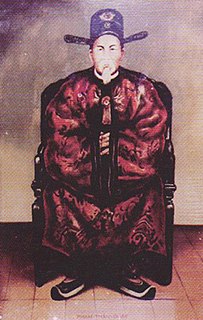 Phạm Thận Duật was a high-ranking mandarin serving in the Nguyễn dynasty. He and Tôn Thất Phan, representing emperor Tự Đức's court, signed the Treaty of Huế. He participated in the anti-colonial Cần Vương resistance and died while being sent to exile in Tahiti by the French. Knowledge of his role in the resistance was hidden or lost for many decades after his death; he was thought to have been a French collaborator for having signed the treaty. 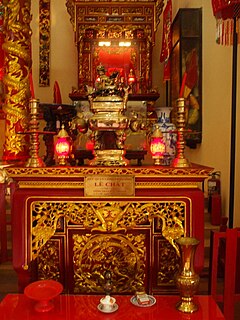