Tomb of Vijaya (Sinhala : විජය සොහොන) is an ancient monument, situated on the hillock of Medagama Kanda, Panduwasnuwara DS in Sri Lanka. The monument site consists of a stupa shaped circular structure which is traditionally believed to be the tomb of King Vijaya (543–505 BCE), the first recorded ruler of Sri Lanka. The hillock of Medagama Kanda lies about 6 km (3.7 mi) south-east of the ancient kingdom, Panduwasnuwara and is surrounded by another two historic temples, Nikasala Aranya Senasanaya and Kande Medagama Raja Maha Vihara. In 2007 the monument was formally recognised by the Government as a protected archaeological site in Sri Lanka. [1]

The site was in a state of ruin before it was discovered by the Sri Lankan Department of Archaeology. During the excavation, archaeologists found some ashes placed inside the structure and carried out radiocarbon dating for them. According to the results the ashes are about 2,500–2,600 years old.[ better source needed ] In 1986, the Department of Archaeology conserved this structure as a protected monument and their investigations disclosed that the present brick monument belongs to the 10th century since the curvilinear bricks of the kot-karalla have some writing in Sinhala script from the 10th century on them. [2]

The archaeological heritage of Sri Lanka is divided in to three ages as Prehistoric, Protohistoric and historical periods. The presence of man activities in Sri Lanka probably dates from 75,000 years ago. Prehistoric sites which are presently identified in the country are distributed from the maritime belt and the lowland plains of the wet and dry zones to the high plateaus and rain forest in the central and south western mountain region of the island. The protohistoric period expands from about 1000 BC to the historical period at about 500 BC. The main indicators of the distribution of protohistoric and early settlements in the island are the megalithic burials and pottery sites.

Pilikuththuwa Raja Maha Vihara is an ancient Cave temple situated in Pilikuththuwa, Sri Lanka. It is located on the Gampaha - Wathurugama road approximately 3.8 km (2.4 mi) away from the Miriswatta junction and 1.6 km (0.99 mi) from the ancient Buddhist temple, Maligatenna Raja Maha Vihara. The temple has been formally recognised by the Government as an archaeological site in Sri Lanka.

Uruwala Valagamba Raja Maha Vihara is an ancient Buddhist temple in Uruwala, Sri Lanka. The temple is located on Wathurugama road and approximately 4.71 km away from Miriswatta junction. The temple has been formally recognized by the Government as an archaeological site in Sri Lanka. 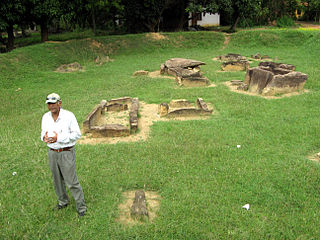 The Ibbankatuwa Megalithic Tombs is an ancient burial site located near Ibbankatuwa Wewa in Galewela DS, Sri Lanka. The site is thought to belong to the megalithic prehistoric and protohistoric periods of Sri Lanka and is considered one of the several ancient burial sites that have been found in the country. The site is situated on the Kurunegala - Dambulla road approximately five kilometers southwest of Dambulla town. Currently, the tomb site has been designated an archaeological protected site in Sri Lanka.

Nikasala Aranya Senasanaya or Nikasala Forest Hermitage is an ancient Cave temple in Panduwasnuwara DS, Sri Lanka. The temple is situated at Dematawakanda in Kanduboda-Moragane Village, about 5 km (3.1 mi) far from the ancient kingdom of Panduwasnuwara. The monastery has been formally recognised by the Government as an archaeological site in Sri Lanka. The designation was declared on 6 July 2007 under the government Gazette number 1505.

Uggal Aluthnuwara Kataragama Devalaya is an ancient devalaya, situated in Uggal Aluthnuwara, Sri Lanka. It lies on Colombo - Batticaloa main road, approximately 9 km (5.6 mi) away from the Balangoda town. The shrine is dedicated to the Sinhalese deity Kataragama deviyo, who is believed as a guardian deity of the Buddha Sasana in Sri Lanka. The devalaya has been formally recognised by the government as an archaeological protected monument. The designation was declared on 3 September 1999 under the government Gazette number 1096.