Thomas Brückner [1] (born 12 June 1975), known by his stage name Tomcraft, is a German DJ and producer. He specializes in progressive house and progressive trance music and is better known for having created the tracks "Loneliness" and "Prosac", working alongside Eniac.

Tomcraft began working as a DJ in Munich in 1994, shifting between techno and the emerging progressive trance style. The following year, he released his first track, "This Is No House". He first met Eniac in 1996, and the two immediately started producing music together, beginning with "Viva". The same year yielded the track "Prosac", but this did not achieve success until it was re-released in 2001. For a decade or so, he worked alongside fellow German producer Eniac as an explosive studio team, steadily building hype and acclaim with regular releases on the country’s famous Kosmo Recordings amongst others.

2002 was also the year Tomcraft released "Loneliness", a progressive vocal track that topped the charts in the United Kingdom in May 2003. [1] [3] Following his breakthrough hit, they parted ways with Eniac following some disagreements, and Tomcraft set about building his reputation in the underground scene further – with the launch of Great Stuff and subsequent signings of such a talents as Lutzenkirchen, Coburn, Oliver Koletzki, The Egg and Ramon Tapia.

2005 saw the launch of Craft Music, a new outlet for his productions with all other signed releases treated to a remix by the man himself – with the label undergoing a major relaunch in 2010 to bring it back to the forefront of house and techno music.

In the interim, he released several other big club smashes, including Prozac and Overdose, with regular releases ensuring his name remained unforgotten and an impressive 4 artist albums released across the space of 6 years showing that he was no mere 12” artist. Having resolved their disagreements, he is now once again working with Eniac on new material, with A Place Called Soul one of their first reunited efforts and a new artist album scheduled for 2011. “It’s always something special when we work together” he beams of his colleague, who has moved back from Berlin to Munich so that they can work on new music day in, day out. Meanwhile, he’s also been working regularly with English talent Tim Healey (formerly known as 'Coburn'), staying with his family in Brighton for a week at a time and working solidly on new material. His collaborations with vocalists over the years included workings with such a stars as Jimmy Pop (Bloodhound Gang's singer), German soul sensation Xavier Naidoo, the USA’s venerable Tommie Sunshine and local rapper Sido, his mind being always open to new and disparate influences and styles and his studio forever expanding with new bits of kit and vintage machinery.

Naturally his DJ career exploded upon the mega-success of that single, with highlights over the years including playing to 1.3 million people at Berlin’s Love Parade, Japan’s famous Fuji Rock Festival, major festivals in Brazil, and some of the coolest clubs in Singapore, Tokyo, Los Angeles, São Paulo, Rio, Cape Town, San Francisco, all over Europe, Poland, Germany, France, Italy, the UK and Russia (where he remains a regular fixture). His sound has morphed over the years from trance into electro house and now since 2007 into a balance of those influences with a progressive house backbone, returning to the melodic sound that he came from originally.

His latest album, For The Queen, was a collaboration with Tobias David Lützenkirchen from their Great Stuff label, and while similar in style with previous Tomcraft releases, it is distinctive in a more narrative way, with less of the dance floor dimension of his previous works; he calls it a "feature album" and it is rich with collaborations and two covers. [4] 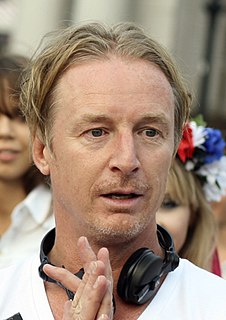 Skazi is an Israeli EDM DJ formed in 1998, by Asher Swissa.

Martin Freeland is a British Goa trance artist, record producer and DJ, who has performed under the pseudonym of Man With No Name since 1990. He is best known for the singles "Teleport" and "Floor-Essence," both of which appeared in the UK Singles Chart.

Electronic dance music (EDM), also known as dance music, club music, or simply dance, is a broad range of percussive electronic music genres made largely for nightclubs, raves and festivals. It is generally produced for playback by DJs who create seamless selections of tracks, called a mix, by segueing from one recording to another. EDM producers also perform their music live in a concert or festival setting in what is sometimes called a live PA.

Phil K is an Australian electronic music DJ and record producer from Melbourne. He is a member of the "Aussie breaks" music scene which also includes other Melbourne DJs such as Nubreed and Andy Page. In addition to DJing, Phil K also produces alongside Habersham and Dave Preston in The Operators and is also a member of Hi-Fi Bugs and Lo-Step. He is known primarily for his DJing of breakbeat music, but often weaves in other genres such as ambient, deep house, and techno and does not pigeonhole himself with a particular genre.

Jean Claude Ades. is an electronic music producer born in Germany. He has resided and worked in Italy, France and Spain specialising in house and electro music.

Yoji Biomehanika, also known as YOJI, Mutant DJ, Ozaka Oz, Bionico, Biomehanika and The Arcade Nation is a Japanese trance/hard trance DJ. A household name in the Japanese club scene in the 1990s, Yoji entered the international scene in 2001 when he was featured in the lineup for the Dance Valley music festival in the Netherlands in front of 90,000 people. He then started headlining some of the largest international music events such as Sensation Black, Tomorrowland and Street Parade. He is now considered one of the icons of hard dance music.

Sean Tyas, is an American DJ and electronic music producer based in Switzerland. His productions and DJ sets are mainly based upon trance music.

"Loneliness" is a song by the German DJ Tomcraft. It was written by Ivan Matias and Andrea Martin, Thomas Bruckner and Eniac and produced by Eniac and Tomcraft. The song is based on an excerpt of Martin's 1999 single "Share the Love". "Loneliness" was released as a single in 2002 worldwide and on 28 April 2003 in the United Kingdom. The single peaked at number ten on the German Singles Chart and topped the UK Singles Chart.

Techno is a genre of electronic dance music (EDM) that is characterized by a repetitive four on the floor beat which is generally produced for use in a continuous DJ set. The central rhythm is often in common time (4/4), while the tempo typically varies between 120 and 150 beats per minute (bpm). Artists may use electronic instruments such as drum machines, sequencers, and synthesizers, as well as digital audio workstations. Drum machines from the 1980s such as Roland's TR-808 and TR-909 are highly prized, and software emulations of such retro instruments are popular.

Kasper Bjørke is a Danish DJ, record producer and remixer from Copenhagen.

Finne Jager, commonly known as Phynn, is a Dutch trance and techno DJ and producer. He is the founder of the American electronic dance music label Lunary Records.

Adam K & Soha are a Canadian DJ and music production duo comprising Adam Kershen and Soha Radjpoust. They are based in Toronto, Ontario, Canada and specialize in progressive house music.