Tome Arsovski (23 September[ citation needed ] 1928 [1] – 22 April 2007) was a Macedonian dramatist. He was born in Kosovska Mitrovica. [2] He studied Slavistics at the Faculty of Philosophy in Skopje. [2] Many of his works are set during World War II or in post-war Macedonia and explore the hardships facing the people, although some are more light-hearted in subject. [3] His works such as The Paradox of Diogenes (1961), Hoops (1965) and A Step Into Autumn (1969) are described by The Columbia Encyclopedia of Modern Drama as being "characterized by strong social commitment and analysis of social anomalies and their effect on the fate of the individual". [4] His The Paradox of Diogenes is a courtroom drama which "focuses sharply on the relationship between the individual and society". [3] [5]

Aristotle was a Greek philosopher and polymath during the Classical period in Ancient Greece. Taught by Plato, he was the founder of the Lyceum, the Peripatetic school of philosophy, and the Aristotelian tradition. His writings cover many subjects including physics, biology, zoology, metaphysics, logic, ethics, aesthetics, poetry, theatre, music, rhetoric, psychology, linguistics, economics, politics, and government. Aristotle provided a complex synthesis of the various philosophies existing prior to him. It was above all from his teachings that the West inherited its intellectual lexicon, as well as problems and methods of inquiry. As a result, his philosophy has exerted a unique influence on almost every form of knowledge in the West and it continues to be a subject of contemporary philosophical discussion. 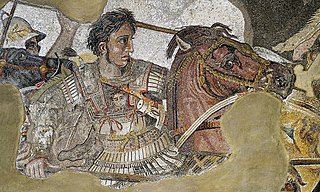 Alexander III of Macedon, commonly known as Alexander the Great, was a king (basileus) of the ancient Greek kingdom of Macedon and a member of the Argead dynasty. He was born in Pella in 356 BC and succeeded his father Philip II to the throne at the age of 20. He spent most of his ruling years on an unprecedented military campaign through western Asia and northeast Africa, and by the age of thirty, he had created one of the largest empires of the ancient world, stretching from Greece to northwestern India. He was undefeated in battle and is widely considered one of history's most successful military commanders. 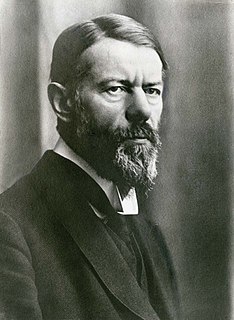 Maximilian Karl Emil Weber was a German sociologist, philosopher, jurist, and political economist, who is regarded today as one of the most important theorists on the development of modern Western society. His ideas would profoundly influence social theory and social research. 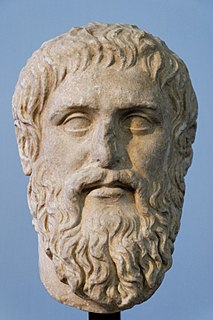 Pythagoras of Samos was an ancient Ionian Greek philosopher and the eponymous founder of Pythagoreanism. His political and religious teachings were well known in Magna Graecia and influenced the philosophies of Plato, Aristotle, and, through them, Western philosophy. Knowledge of his life is clouded by legend, but he appears to have been the son of Mnesarchus, a gem-engraver on the island of Samos, then ruled by the Persian Achaemenid Empire. Modern scholars disagree regarding Pythagoras's education and influences, but they do agree that, around 530 BC, he travelled to Croton in southern Italy, where he founded a school in which initiates were sworn to secrecy and lived a communal, ascetic lifestyle. This lifestyle entailed a number of dietary prohibitions, traditionally said to have included vegetarianism, although modern scholars doubt that he ever advocated for complete vegetarianism.

Zeno's paradoxes are a set of philosophical problems generally thought to have been devised by Greek philosopher Zeno of Elea to support Parmenides' doctrine that contrary to the evidence of one's senses, the belief in plurality and change is mistaken, and in particular that motion is nothing but an illusion. It is usually assumed, based on Plato's Parmenides (128a–d), that Zeno took on the project of creating these paradoxes because other philosophers had created paradoxes against Parmenides' view. Thus Plato has Zeno say the purpose of the paradoxes "is to show that their hypothesis that existences are many, if properly followed up, leads to still more absurd results than the hypothesis that they are one." Plato has Socrates claim that Zeno and Parmenides were essentially arguing exactly the same point. 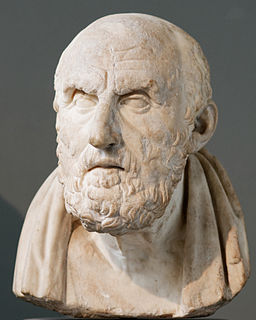 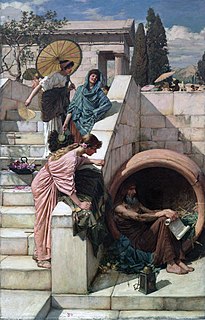 Diogenes, also known as Diogenes the Cynic, was a Greek philosopher and one of the founders of Cynic philosophy. He was born in Sinope, an Ionian colony on the Black Sea coast of modern day Turkey, in 412 or 404 BC and died at Corinth in 323 BC.

Benjamin Graham was a British-born American economist, professor and investor. He is widely known as the "father of value investing", and wrote two of the founding texts in neoclassical investing: Security Analysis (1934) with David Dodd, and The Intelligent Investor (1949). His investment philosophy stressed investor psychology, minimal debt, buy-and-hold investing, fundamental analysis, concentrated diversification, buying within the margin of safety, activist investing, and contrarian mindsets. 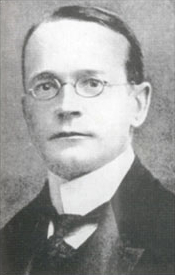 Joseph Martin McCabe was an English writer and speaker on freethought, after having been a Roman Catholic priest earlier in his life. He was "one of the great mouthpieces of freethought in England". Becoming a critic of the Catholic Church, McCabe joined groups such as the Rationalist Association and the National Secular Society. He criticised Christianity from a rationalist perspective, but also was involved in the South Place Ethical Society which grew out of dissenting Protestantism and was a precursor of modern secular humanism. 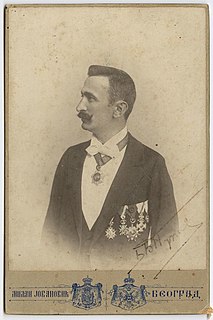 Branislav Nušić was a Serbian playwright, satirist, essayist, novelist and founder of modern rhetoric in Serbia. He also worked as a journalist and a civil servant. He was often referred to as the Serbian and Balkan Gogol.

Ancient Greek literature is literature written in the Ancient Greek language from the earliest texts until the time of the Byzantine Empire. The earliest surviving works of ancient Greek literature, dating back to the early Archaic period, are the two epic poems The Iliad and The Odyssey, set in an idealized archaic past today identified as having some relation to the Mycenaean era. These two epics, along with the Homeric Hymns and the two poems of Hesiod, Theogony and Works and Days, comprised the major foundations of the Greek literary tradition that would continue into the Classical, Hellenistic, and Roman periods. 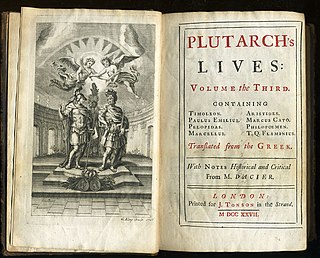 Macedonian literature begins with the Ohrid Literary School in the First Bulgarian Empire in 886. These first written works in the dialects of the Macedonian recension were religious. The school was established by St. Clement of Ohrid. The Macedonian recension at that time was part of the Old Church Slavonic and it didn't represent one regional dialect but a generalized form of early eastern South Slavic. The standardization of the Macedonian language in the 20 century provided good ground for further development of the modern Macedonian literature and this period is the richest one in the history of the literature itself.

Gao Ming, also known as Kao Ming, Gao Zecheng, and the Cabbage Root Taoist, was a Chinese poet and playwright during the Yuan Dynasty.

Mimoza Nestorova-Tomić is a Macedonian architect, planner, and urban designer, who played a significant role in the masterplan and reconstruction of Skopje after the 1963 earthquake. Initially she worked specifically in the team for social planning with Polservice, the Polish consultants, alongside Kenzo Tange, the winner of a United Nations international competition for the reconstruction of Skopje. In the period 1986-1989 Nestorova-Tomić was director of the director and design architect of the City Institute for Planning in Skopje. As a female architect working within socialist Yugoslavia, Nestorova-Tomić presents a different trajectory to her counterparts in the West.