He started playing for Maccabi Petah Tikva in the Youth level. He played there alongside team-mates Gal Alberman and Omer Golan. [1]

In his 10 years in Petah Tikva, Tomer won the Toto Cup, reached 2nd place in the league and also the State Cup Final. [2]

In 2005 Ben Yosef was transferred to Beitar Jerusalem. In 2006 the veteran Arik Benado moved to Beitar. Initially, there were doubts whether Ben Yosef would stay in Beitar but eventually he stayed and maintained a consistent fixed role in the squad.

In September 2012, Ben-Yosef signed at Hapoel Tel Aviv for one year, After being released from Beitar Jerusalem.

Eliyahu "Eli" Ohana is an Israeli former football player, and the current Chairman of Israeli club Beitar Jerusalem. He played as forward or midfielder, and was considered one of Israel's finest players. 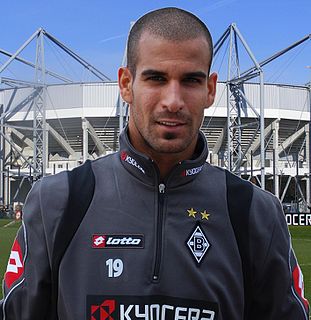 Gal Alberman is an Israeli former professional footballer who played as a defensive midfielder.

Shay Holtsman is a retired Israeli footballer. He played as a striker in the top level of Israeli league football for Maccabi Netanya, Maccabi Haifa, Tzafririm Holon, Hapoel Be'er Sheva, Beitar Jerusalem, Hapoel Haifa, Maccabi Petah Tikva, Ironi Rishon leZion, F.C. Ashdod and for the Israel national team. He also played for Austrian club Austria Wien for one season. He is both F.C. Ashdod's and the Israeli Premier League's record goalscorer. After retiring as a player, Holtzman worked as an assistant manager in F.C. Ashdod and Maccabi Netanya.

Ran BenShimon is a former Israeli football player and the current manager of F.C. Ashdod.

Avraham "Avi" Rikan is an Israeli professional footballer who plays as a defender or midfielder for Maccabi Tel Aviv. His previous clubs include Maccabi Herzliya, Hapoel Petah Tikva, Beitar Jerusalem, and FC Zürich. At international level, Rikan was capped at levels from under-17 to senior team.

Tomer Eliyahu is a retired Israeli professional association football player. Known as a journeyman, Eliyahu played more than 350 matches in thirteen seasons in Israel's Ligat ha'Al filling in as both a defender and a midfielder.

Dimaku Fidelis Tochukwu is a Nigerian footballer who plays for Hapoel Acre F.C. He plays as a Defender.

Almog Buzaglo is an Israeli professional footballer who plays for Hapoel Haifa. 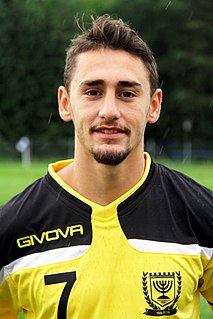 Omer Atzili is an Israeli professional footballer who plays as a winger for APOEL.

The 2014–15 Israeli Premier League is the sixteenth season since its introduction in 1999 and the 73nd season of top-tier football in Israel. It began in the end of August 2014 and ended in May 2015. Maccabi Tel Aviv are the defending champions, having won their third Premier League title, and 20th championship last season.

Beitar Petah Tikva is an Israeli football club based in Petah Tikva. The club currently plays in Liga Bet South A division and play home matches at the Sportek Stadium in Kfar Sirkin.

The 2000–01 Toto Cup Al was the 17th season of the third most important football tournament in Israel since its introduction. This was the second edition to be played with clubs of both Israeli Permier League and Liga Leumit clubs.

The 2015–16 Toto Cup Al was the 31st season of the third-important football tournament in Israel since its introduction and the 11th tournament involving Israeli Premier League clubs only.

Rafi Cohen is an Israeli football manager and retired footballer who currently serves as the assistant manager for the Israel national football team.

The 2017–18 season is Beitar Jerusalem 81st season since its establishment in 1936, and 70th since the establishment of the State of Israel. During the 2017–18 campaign the club have competed in the Israeli Premier League, State Cup, Toto Cup, UEFA Europa League. In the end of the previous season the association of Israeli football decide that The owner Tabib can't manage the team for 2 years, because his involvement in criminal case. In 28 May the owner Eli Tabib announced the joining of the biggest legend of Beitar Eli Ohana to the chairman. Within the preparations of the season, Beitar signed the players: Georginho, Amir Agayev, Zion Tzemah, Miki Siroshtein, Gaëtan Varenne, Or Va'aknin, and the one of the successful Israeli players of all times Yossi Benayoun.

Tomer Ben Haim is an Israeli footballer who plays as a Midfielder. He was play also for Maccabi Ironi Ashdod.

The 2020–21 Israeli Premier League, also known as Ligat Tel Aviv Stock Exchange for sponsorship reasons, is the 21st season since its introduction in 1999 and the 79th season of top-tier football in Israel. The season began on 22 August 2020 and will conclude on 24 May 2021.

The 2020–21 Toto Cup Al was the 36th season of the third-important football tournament in Israel since its introduction and the 15th tournament involving Israeli Premier League clubs only.

Liran Rotman is an Israeli footballer who plays for Beitar Jerusalem.