Tomer Moshe Steinhauer [1] [2] (Hebrew : תומר משה שטיינהאור‏‎‎; born October 3, 1966) is an Israeli professional basketball coach and former professional player. He is currently the assistant coach for Maccabi Haifa of the Liga Leumit. Steinhauer played for the Israel national basketball team in 1986-2001, and was an Israeli Cup winner in 1993 with Hapoel Tel Aviv and Israeli champion in 1996 with Maccabi Tel Aviv. He was the 1997 Israeli Basketball Premier League MVP.

Tomer Steinhauer began his career as a player of junior teams in Maccabi Haifa B.C.. In 1984 he won with Haifa youth team the national youth championship and state cup, [3] and the next year became a part of the main Haifa team. He kept playing in Haifa till 1991 (taking a year in 1988/1999 to study and play at the University of South Florida [4] ).

In 1986 he debuted with the Israel national basketball team at the World Championship and finished it with 4 points in 2 games. Between 1991 and 1994 Steinhauer played in Hapoel Tel Aviv B.C. [5] and in 1993 won Israeli Cup with this team. In addition, he three times in a row played with Hapoel in the Israeli championship finals, twice losing to Maccabi Tel Aviv B.C. and once to Hapoel Galil Elyon. [6]

After playing the 1994/1995 season with Hapoel Holon Steinhauer signed a 3-year contract with the leaders of Israeli basketball - Maccabi Tel Aviv. In fact, though, he played with Maccabi only one year, winning the Israeli championship, and then got transferred to Maccabi Ra'anana. Next two years the Tel Aviv club kept paying Steinhauer his salary, thus allowing him to joke that his dreams came true: he gets paid by Maccabi for playing against them. [5] Steinhauer's last season with Ra'anana he once again finished as the national championship finalist, again losing to Tel Aviv. He was the 1997 Israeli Basketball Premier League MVP.

In the late 1990s Steinhauer was one of the leaders of the national team, peaking during the 1997 EuroBasket. At 8 games during this tournament he was amassing 17.1 points on an average, which was the 2nd highest result in the Israeli team (behind only Oded Katash) and 5th highest among all tournament players, and added 6.4 rebounds per game. [7] Overall, he played 13 years with the Israeli national team. [6] Steinhauer was considered one of the best centers in Israeli team history for his ability to play under the rim against more athletically endowed centers of other teams, his refined mid-range shot and willingness to hit an occasional 3-pointer. At the same time he was not one of the most hardworking players and only put up mediocre defense. [5]

In the early 2000s Steinauer's value for his teams started deteriorating. He moved to the Northern Israel, taking root in Kiryat Tiv'on. After playing 19 seasons in Israel's top basketball league (ranked 14th in the all-time list of top league scorers with 5,253 points [8] ) he kept playing for several years in the local Tiv'on team in Israeli 3rd- and 2nd-tier leagues, [5] finishing the career at the age of 42 in Hapoel Emeq Yizre'el. [9] For short periods of time Steinhauer worked as assistant coach in Bnei Herzliya and as the head coach of Tiv'on youth teams. In 2016 he was appointed assistant coach of Maccabi Haifa B.C., joining Opher Rakhimi who was appointed head coach. [3] [8]

According to Steinhauer's own words, he was not interested in a business career following retirement because he is averse to financial risk and has enough money from his playing years to afford living in Kiryat Tiv'on. He has three children: two sons and a daughter. [10] For some time Steinhauer got involved in politics, joining Israeli left, and in 2009 ran unsuccessfully in the Israeli legislative election as a member of left-wing party Meretz. [6]

Statistics of games with Israel national team and in European cups

The 2010–11 Israeli Premier League was the twelfth season since its introduction in 1999 and the 69th season of top-tier football in Israel. It began on 21 August 2010 and ended on 21 May 2011. Hapoel Tel Aviv were the defending champions.

Nitzan Shirazi was an Israeli association football player and manager.

Idan Zalmanson is an Israeli basketball player for Hapoel Jerusalem of the Israeli Premier League. He was named the Israeli Basketball Super League Most Improved Player in 2017.

The 2004–05 Israel State Cup was the 66th season of Israel's nationwide football cup competition and the 51st after the Israeli Declaration of Independence.

Danny Franco is an Israeli basketball coach. He is currently the head coach of Hapoel Tel Aviv of the Israeli Premier League.

The 2015–16 season is Beitar Jerusalem's 47th season in the Israeli Premier League. The club's owner Eli Tabib in June said he would sell the team to someone that will invest money in the club. However, he later changed his mind and decided to continue investing in the squad and not abandon the team. Beitar then signed eight players in pre-season: Liroy Zhairi, Nes Zamir, Dovev Gabay, Uri Magbo, Daniel Askling, Vlad Morar, Nisso Kapiloto, Pablo de Lucas and Jesus Rueda.

The 2016–17 season was Maccabi Haifa's 59th season in Israeli Premier League, and their 35th consecutive season in the top division of Israeli football.

Rami Hadar is an Israeli basketball coach for the Hapoel Be'er Sheva of the Israeli Premier League. 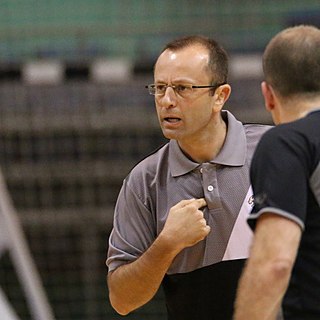 The 2017–18 season is Maccabi Tel Aviv's 111th season since its establishment in 1906, and 70th since the establishment of the State of Israel. During the 2017–18 campaign the club have competed in the Israeli Premier League, State Cup, Toto Cup, UEFA Europa League.

Yiftach Ziv is an Israeli professional basketball player for Hapoel Gilboa Galil of the Israeli Premier League. Standing at 6 ft 3 in (1.91 m), he plays the point guard position.

Golan Gutt is an Israeli professional basketball player for Maccabi Rishon LeZion of the Israeli Premier League. Standing at 6 ft 4 in (1.93 m), Gutt plays at the shooting guard position. 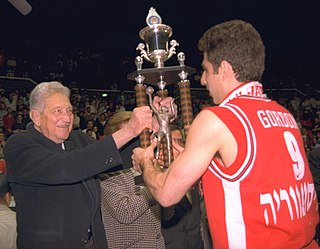 Adi Gordon is an Israeli former professional basketball player. He was a two-time Israeli State Cup winner with Hapoel Jerusalem. He was a four-time Israeli Premier League Assists Leader, in 1992 to 1994, and 1996. Gordon is widely considered one of the greatest point guards in Israeli basketball history.

Ariel Avraham Beit-Halahmy is an Israeli professional basketball coach who was most recently the head coach for Hapoel Tel Aviv of the Israeli Premier League.

Hapoel Haifa Football Club is an Israeli football club located in Haifa. During the 2019–20 campaign, the club has competed in the Israeli Premier League, State Cup and Toto Cup.