Arecibo is a municipality on the northern coast of Puerto Rico, on the shores of the Atlantic Ocean, located north of Utuado and Ciales; east of Hatillo; and west of Barceloneta and Florida. It is about 50 miles (80 km) west of San Juan, the capital city. Arecibo is the largest municipality in Puerto Rico by area, and is part of the San Juan, Caguas and Guaynabo Metropolitan Statistical Area. It is spread over 18 wards and Arecibo Pueblo. Its population in 2010 was 96,440.

Rafael Vicente Correa Delgado is an Ecuadorian politician and economist who served as President of Ecuador from 2007 to 2017. The leader of the PAIS Alliance political movement from its foundation until 2017, Correa is a democratic socialist and his administration focused on the implementation of left-wing policies. Internationally, he served as president pro tempore of the Union of South American Nations.

General elections were held in Ecuador on 15 October 2006 to elect a new President and National Congress.

Fernando Edgardo Correa Ayala is a Uruguayan retired footballer who played as a striker, and is a manager.

Jaime Correa Córdoba also known as "El Alacran" or "El Motor", is a former Mexican football Defensive midfielder who last played for Zacatepec in the Ascenso MX. On 21 May 2010, Correa was traded from Pachuca to San Luis. San Luis outbid Puebla to get Correa. Correa made his debut for the Mexico national team in the 2007 Copa América against Brazil.

Carlos Gabriel Correa Viana is a Uruguayan retired footballer, and is a manager.

Don Antonio Aguilar y Correa, 8th Marquess of la Vega de Armijo, 6th Marquess of Mos, Grandee of Spain was a Spanish noble and politician who served as Prime Minister of Spain between 1906 and 1907, and was appointed three times Minister of State, in governments headed by Práxedes Mateo Sagasta.

The 2010 Ecuador crisis took place on 30 September 2010, when elements of the National Police blockaded highways, occupied the National Parliament, blocked the Mariscal Sucre International Airport in Quito and the José Joaquín de Olmedo International Airport in Guayaquil, and took over TV Ecuador's station, in what they claimed was a strike to oppose a government-sponsored law that supposedly reduced their benefits. Unrest and looting was reported in seven provincial capitals of the country due to the lack of law enforcement. 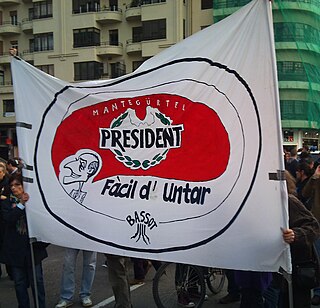 The Gürtel case is an ongoing political corruption scandal in Spain, which implicates officers of the People's Party (PP), Spain's major conservative party, some of whom have been forced to resign or have been suspended. Gürtel is one of the largest corruption scandals in recent Spanish history, and there are related scandals, such as the Bárcenas case, which have received media attention in their own right. The case came to public attention in early 2009, but for the most part the suspects were not put on trial until October 2016.

Vanina Noemí Correa is an Argentine footballer who plays as a goalkeeper for San Lorenzo de Almagro and the Argentina women's national team. She has played for Renato Cesarini, Boca Juniors, Social Lux and Rosario Central in her country. 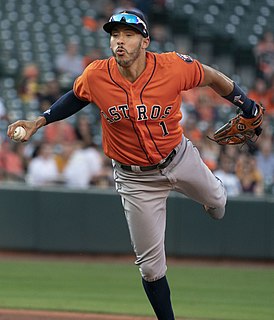 Carlos Javier Correa Oppenheimer is a Puerto Rican professional baseball shortstop for the Houston Astros of Major League Baseball (MLB). The Astros selected Correa with the first overall selection of the 2012 MLB draft. 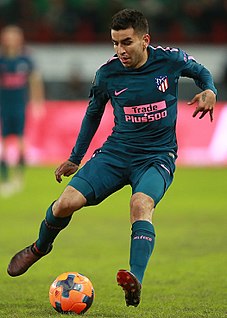 Ángel Martín Correa Martínez, known as Ángel Correa, is an Argentine professional footballer who plays as a forward for Spanish club Atlético Madrid and the Argentina national team.

Correa (Spanish/ Corea is a Jewish Sephardic surname. The surname ‘Correa’ or ‘Corea’ is a derivative of the Portuguese and Spanish word ‘correia’ meaning ‘leather strap’. The surname is of occupational origin, meaning the holder was originally a maker or seller of leather straps. The surname is popular in Portugal and in Spain and is adopted by Sri Lankans and Sinhalese families for further advancement under Portuguese rule. Notable people with the surname include:

Carlos Joaquín Correa is an Argentine professional footballer who plays for Italian club Lazio as a forward.

Tomi Rae Augustus Lahren is an American conservative political commentator and former television host. She hosted Tomi on TheBlaze, where she gained notice for her short video segments called "final thoughts", in which she frequently criticized liberal politics. Many of her videos went viral, with The New York Times describing her as a "rising media star".

Roberto Antonio Correa Silva, commonly known as Rober, is a Spanish professional footballer who plays for SD Eibar as a right back.

Javier Marcelo Correa is an Argentine professional footballer who plays as a forward for Liga MX side Santos Laguna.