Kōra was born Tomi Wada [lower-alpha 1] on July 1, 1896 in Toyama Prefecture. [2] [3] [1] She graduated from the Japan Women's University in 1917. [2] [1] While a student, she attended the funeral of Tsuriko Haraguchi, held at the university. Haraguchi was a psychologist and the first Japanese woman to obtain a PhD; Kōra was reportedly inspired by Haraguchi to continue her advanced studies in psychology. [1]

Like Haraguchi, she attended Columbia University, earning her Master's degree in 1920 and her Ph.D. in 1922. [2] At Columbia, she collaborated with Curt Richter to conduct her experiments on the effects of hunger. [3] [1] Kōra's doctoral dissertation, completed under the supervision of Edward L. Thorndike, was titled An Experimental Study of Hunger in its Relation to Activity. [3] [1] [4] She was the second Japanese woman to obtain a Ph.D. in psychology, after Haraguchi. [3]

After returning to Japan, Kōra worked as an assistant in a clinical psychiatry laboratory and taught at Kyushu Imperial University. She was promoted to associate professor, but was met with resistance because she was unmarried at the time. [1] She resigned from the institution in 1927 and took a post at Japan Women's University, where she became a professor. [1]

Kōra was a member of the Japanese Christian Women's Peace Movement, and travelled to China. There, in January 1932, she met the Chinese writers Lu Xun and Xu Guangping at a bookstore owned by the Japanese Kanzō Uchiyama; shortly after, Lu Xun wrote a poem for her. [5]

In April 1952, Kōra attended the International Economic Conference in Moscow. [4] [6] Per a request from the US embassy, the Japanese Foreign Ministry had refused to issue passports to those who wished to travel to the Soviet Union; Kōra got around this restriction by travelling to Moscow through Paris, Copenhagen, and Helsinki. They met with vice-minister of the Chinese Ministry of Foreign Trade Lei Rei-min and were invited to Beijing. At the time, the Japanese government did not recognize the legitimacy of the PRC government. [7] That May, she visited Beijing as a member of the House of Councillors Special Committee for the Repatriation of Overseas Japanese. The visit was a diplomatic breakthrough, resulting in the first PRC–Japan private-sector trade agreement (signed June 1, 1952 [7] ) and the resumption of the repatriation of Japanese left in China following the end of World War II. [8] Both praise and opposition greeted the trade agreement from Japanese legislators. [9]

Kōra spent four days as a guest at the Women's International Zionist Organization in Israel in April 1960. [10]

Emperor Saga was the 52nd emperor of Japan, according to the traditional order of succession. Saga's reign spanned the years from 809 through 823. 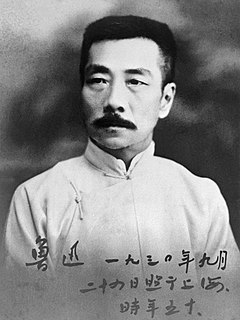 Lu Xun was the pen name of Zhou Shuren, a Chinese writer, essayist, poet, and literary critic. He was a leading figure of modern Chinese literature. Writing in Vernacular Chinese and Classical Chinese, he was a short story writer, editor, translator, literary critic, essayist, poet, and designer. In the 1930s, he became the titular head of the League of Left-Wing Writers in Shanghai.

La Jeunesse was a Chinese magazine in the 1910s and 1920s that played an important role in initiating the New Culture Movement and spreading the influence of the May Fourth Movement. According to the Mingwei, "The ideal of national rejuvenation was first clearly presented by the late Qing reformer Liang Qichao[梁启超] (1873-1929) in his groundbreaking' Shaonian Zhongguo shuo' [少年中国说], which happened to be published in the first month of China's first lunar year of the twentieth century". New Youth was the most important periodical emerging from China’s New Culture Movement (1915-19),which waged a totalistic cultural war on Chinese tradition and aimed at a radical reform of Chinese society.Founded by Chen Duxiu during the early Republic of China period, the publication was both an instrument of and witness to the revolutionary changes that swept through China during the era. Over its history, the magazine became increasingly aligned with the Chinese Communist Party, eventually becoming its official theoretical journal. It was shut down by the ruling Nationalist government in 1926. "New Youth" magazine not only played an active role in the dissemination of young ideas, but also the May Fourth New Culture One of the most important publications in the history of sports and modern Chinese literature and cultural thought. Later, many famous Chinese writers and thinkers joined, such as Hu Shi, Lu Xun, Li Dazhao, and Chen Hengzhe. Many scholars believe that China's backwardness is not only a political factor, but cultural and ideological factors are also crucial. According to Mingwei, "Perhaps it is the words of a conservative intellectual like Zhang Shizhao [章士钊](1881-1973) that can best demonstrate the absolute authority endowed in youth. He saw the New Culture Movement as a sprint in which everyone, including the by-then veteran literature Liang Qichao, participated. Those who did not would be declared ‘backward,’ ‘reactionary,’ or ‘dead’: ‘when thousands [(]of youth[)] point their fingers at those [(]who do not run with them [)], those will drop dead immediately’ 千人所指，不疾自僵." This Wikipedia will focus on the publication history, the main notable contributors and the types of literary genres. 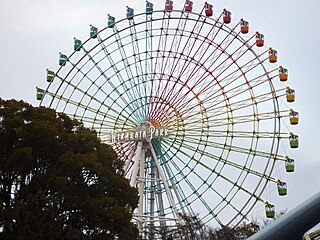 Hirakata is a city in northeastern Osaka Prefecture, Japan. It is known for Hirakata Park, an amusement park which includes roller coasters made of wood.

Derived from an idealized traditional role for women, the four-character phrase Good Wife, Wise Mother or Wise Wife, Good Mother was coined by Nakamura Masanao in 1875. 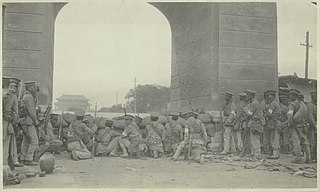 The Manchu Restoration of July 1917 was an attempt to restore the Chinese monarchy by General Zhang Xun, whose army seized Beijing and briefly reinstalled the last emperor of the Qing dynasty, Puyi, to the throne. The restoration lasted only a few days, from July 1 to 12, and was quickly reversed by Republican troops. Despite the uprising's popular name, almost all reactionary putschists were ethnic Han Chinese. 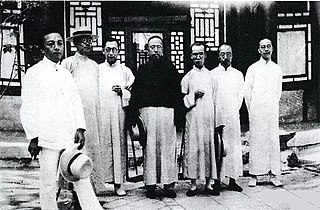 Liu Bannong or Liu Fu was a Chinese poet and linguist. He was a leader in the May Fourth movement. He made great contributions to modern Chinese literature and photography.

Japan Women's University is the oldest and largest of private Japanese women's universities. The university was established on 20 April 1901 by education reformist Jinzo Naruse.

Tomiko Satō was the common-law wife of the Chinese Communist scholar and poet Guo Moruo. She is often referred to in Chinese sources as Guo Anna, the way Guo Moruo called her. Satō Tomiko spent about 20 years with Guo, in Japan and in China, until they were separated by the war, and they had five children together.

Chen Daqi (1886–1983), or Ch'en Ta-ch'i, was a psychologist, philosopher, politician, and writer. He was a pioneer of modern psychology in China. Chen was a former President of Zhejiang University, and acting President of Peking University.

Sara Takatsuki is a Japanese actress from Kanagawa Prefecture, Japan. She is represented by the agency Sweet Power.

Tsuruko Haraguchi was a Japanese psychologist and the first Japanese woman to receive a Doctor of Philosophy.

Events in the year 1912 in Japan. In the history of Japan, it marks the final year of the Meiji period, Meiji 45 (明治45年), upon the death of Emperor Meiji on July 30, and the beginning of the Taishō Period, Taishō 1 (大正元年), upon the accession of his son Emperor Taishō.

Utako HanazonoHanazono, Utako (花園歌子)(January 1905 – 1982) was a Japanese writer, modern dancer, geisha and a Japanese traditional dance master by the name of Tamae Hanazono at her later years.

Miyagi Tamayo, nee Ueda, was a Japanese social worker and politician who was a member of the House of Councillors.

Isoko Hatano was a Japanese developmental psychologist and writer. Her 1951 book, Shōnenki, was a national bestseller that was adapted into a feature film. She was awarded the Order of the Precious Crown in 1976.